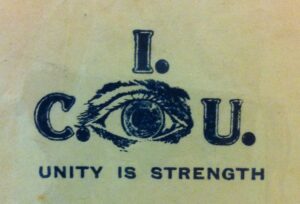 The Industrial and Commercial Workers’ Union of Africa (ICU) and its charismatic leader, Clements Kadalie, dominated the southern African political landscape of the 1920s. The movement demonstrated a wide spectrum of opposition to the established order. From humble beginnings in Cape Town in 1919, the ICU recruited unprecedented numbers of black workers throughout the following ten years. 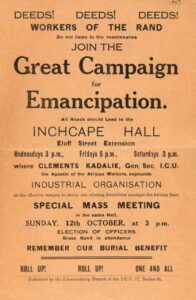 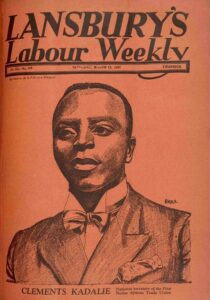 On the left :  Clements Kadalie on the front page of Lansbury’s Labour Weekly, 12 March 1927 (Photograph by courtesy of British Library) – On the right :  Handbill advertising an October 1924 ICU meeting in Johannesburg

The movement was influenced initially by the “Garveyite” ideas of Marcus Garvey, the Jamaican black nationalist and separatist. In South Africa, the ICU became such a threat to the established order that it often dominated debates in the white parliament during that decade, with the 1926 sitting becoming known as “the Kadalie session”, alluding to Clements Kadalie.

The ICU rivalled and even eclipsed other local black political organisations, pre-eminently the African National Congress, with its built-in conservative tendency and gradualist manner. In contrast the ICU, with its spirited, forward-looking youthful outlook, its direct appeal to the economic interests of the African poor, and its confrontational political rhetoric, captured the spirit of the moment.

However, in spite of continuing growth and positive international media exposure, the movement failed to sustain its momentum beyond the 1920s. Under increasing pressure from the segregationist state, and undone by internecine conflicts and financial mismanagement, the ICU had by 1930 splintered into several shrinking factions, leaving its members embittered by their leaders’ failures to honour their bold promises.

Nevertheless, the movement’s legacy was impressive, as the ICU won significant victories which improved workers’ lives, laying the foundations for the modern black labour movement in Southern Africa. It provided a radical alternative to the prevailing moderate black nationalism, and invoked ideals of racial unity and socialist internationalism, forging a collective political identity that stretched beyond South Africa to what are now Lesotho, Namibia, Malawi, Mozambique, Zimbabwe and Zambia.

Perhaps the most eloquent testimony to the ICU’s significance, however, is ICU member Stimela Jason Jingoes’ memory of how the organisation transformed the consciousness of black Southern African workers: 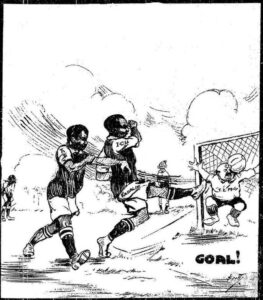 EXTRACTS FROM THE TEXT

I have received yours of 19th inst., for which please receive my sincere thanks. My only regret is that I could not contribute more liberally.

The feelings expressed by you on behalf of your union, I much appreciate, in connection with my endeavours in Parliament; and I sincerely hope that they may contribute to a proper and true realisation of the intimate connection in which those stand who are represented by your union and myself in relation to the common cause of South Africa.

It is for us by our own common endeavours, to make this country, that we both love so much, great and good. In order to do that we must not only ourselves be good and great, but we must also see that there is established between the white and the black Africander that faith in and sympathy with one another which is so essential for the prosperity of a nation.

It is my sincere desire that that faith and sympathy shall exist and to that end I hope to exert all my influence.

It is of paramount importance that the Trade Union and Labour Movement should know what this new trade unionism in Africa stands for. It has been alleged in South Africa that we are advocating other things than trade unionism – that we are promoting racial hatred and want to turn the white man out of Africa [.…] We are not fighting the white man as a white race; we are fighting for elementary political and human rights for ourselves and our children. We want adequate wages for the work we do, social status, opportunities of education, and the ordinary privileges of humanity, which the white man takes as a matter of course.

At the moment our activities are confined to the industrial side of things, but it is certain that in these days of world-wide democracy, we cannot confine our movement very long merely to industrial issues. But when the time comes for us to agitate for our political rights, we are not going to follow the narrow path of nationalism. We shall be guided by the spirit that permeated old Africa, of accepting every man as our brother. We are utterly opposed to nationalism. Our goal is international Socialism.

I am still a student in the Trade Union Movement, but notwithstanding this fact, I cannot help but emphasise again and again the factor in modern civilisation which is exerting the most radical influence in world politics to-day, and which the International Trade Union Movement seems to me to ignore a great deal more than it can afford to do – the fact that capitalism recognises no frontiers, no nationality, and no race. I have attended two Trade Union Congresses in Europe – one national and one international – and I could not help but feel profoundly disappointed at the spirit and prevailing tone of these assemblies. The workers’ leaders are attacking one another; they are pinning their faith to such impossible doctrines as that of ‘co-operation in industry’; and they have not the international mind. They are still thinking in terms of outworn nationalism. And, besides all this, there are two Internationals in Europe. How in the name of heaven can the workers of the world be effective in their struggle against world capitalism while they are under dual leadership? The Red International, though we may not care to think about the fact, has done a great deal to encourage the organisation of coloured workers in Asia and America, and has given them financial and moral assistance, while the IFTU, to which my organisation has recently become affiliated, has made in the past no concrete effort to assist the coloured workers of the world. Let me make the position of my organisation clear.[1] We joined the IFTU with the specific object of advocating within it one Trade Union International.

Although the Edinburgh Congress has given no definite lead in this direction, it is hoped that the General Council will, nevertheless, lead the agitation for a World Workers’ Trades Union Congress.[2] Time is pressing. War mongers are at work in Europe, China, and Africa. During my travels in Europe and England, I have discovered everywhere in the rank and file the realisation of the urgent necessity for an all-inclusive International and a World Congress. The workers are ready for it; only leadership is wanted. Cannot the British Trade Union Movement – the oldest in the world – lead the way to a World Trade Union Congress? The new Africa is ready to follow courageous leadership, and to fall wholeheartedly with any movement that will mobilise the workers of the world to fight world capitalism.

[1] The International Federation of Trade Unions (IFTU), based in Amsterdam, was a transnational body of moderate and socialist trade unions formed in 1919. It was dominated by Europeans but had an increasing number of Palestinian and Indian delegates by the mid-1920s. The ICU affiliated to the IFTU in October 1926. The Red International of Labour Unions (RILU) by contrast was a communist-run body based in Moscow that explicitly espoused an anti-colonial agenda, and actively worked with colonised workers. FNETU affiliated with the RILU in 1928.

[2] Kadalie attended the 1927 annual conference of the British Trades Union Congress (TUC) in Edinburgh but was side-lined by moderate officials.

David Johnson is Professor of Literature at The Open University. He is the author of Shakespeare and South Africa (1996), Imagining the Cape Colony: History, Literature and the South African Nation (2012) and Dreaming of Freedom in South Africa: Literature between Critique and Utopia (2019); the principal author of Jurisprudence: A South African Perspective (2001); and the co-editor of A Historical Companion to Postcolonial Literatures in English (2005), The Book in Africa: Critical Debates (2015), and Stuart Hood: Twentieth-Century Partisan (2021). He is the General Editor of the Edinburgh University Press series Key Texts in Anti-Colonial Thought.

Henry Dee is a postdoctoral research fellow at the University of Glasgow. He completed a PhD on the life of Clements Kadalie at the University of Edinburgh in 2020, and has published research on the ICU and the broader Malawian diaspora in the Journal of Southern African Studies, the Journal of South African History, African Studies and the Oxford Research Encyclopaedia for African History.