Historical Publications Southern Africa (previously the Van Riebeeck Society) was established in 1918 to publish meticulously edited original sources on Southern African history, which were inaccessible to the average South African. Since then it has produced one volume in every year bar two. Membership is open to all who pay an annual subscription fee which funds our publications. In return, members receive that year’s publication.

The Society was very much the product of the new Union of South Africa established in 1910 and sought to provide the fledgling state with a sense of its roots in the colonial past. Even so, in a multi-racial and interdependent country like South Africa, the subject-matter of its volumes went well beyond white society and also contained rich information on the indigenous San, Khoekhoen and African populations and slaves, though usually seen through colonial eyes. However, since the beginning of the 21st Century, the Society has deliberately sought to widen the range of voices and perspectives it puts into print, making its publication list far more wide-ranging. In our second century our aim is to reflect the diversity, the richness and the complexity of our country.

The origins of the Society

The origins of the Society lie in the discovery by Lloyd in 1911 of a large fragment of Adam Tas’s diary for 1704. As the leader of the free burgher opponents of the corrupt Dutch East India Company Governor of the Cape, Willem Adriaan van der Stel, Tas symbolised the long pedigree of the colonists’ struggle for freedom from autocratic foreign rule, which seemed so relevant to the building of national identity at the time of Union. The Trustees of the Library, led by Merriman, raised the funds to publish the diary which appeared in 1914, edited by Professor Leo Fouché.

With the money remaining from the publication fund, the Library’s Trustees decided to publish as the second volume Baron van Pallandt’s General Remarks on the Cape of Good Hope, a rare work which had been suppressed when first published in 1803. Pallandt’s General Remarks duly appeared in 1917 but met with sharp criticism in Parliament from the Opposition National Party for its inclusion of passages referring to the harsh treatment by the Dutch settlers of the Khoekhoen (‘Hottentots’). They denounced the work in rousing terms, with the result that sales soared, providing the Trustees with a healthy profit.

Despite this financial success, the Trustees hesitated to continue publishing works which might fuel controversy. Accordingly, Lloyd and Merriman decided to found a private historical publication society along the lines of the Hakluyt and Linschoten Societies in Britain and Holland respectively. Therefore, on 29 August 1918 the inaugural meeting of the new society took place in the South African Public Library. To appeal to both English- and Dutch-speakers, it was named the ‘Van Riebeeck Society for the Publication of South African Historical Documents’. The Society started with 54 members, many of them members of parliament; the first volume to be published was De Chavonnes’ and Van Imhoff’s Reports on the Cape.

As the Society approached its centenary in 2018, it was increasingly felt that the name ‘Van Riebeeck Society’ was no longer appropriate or accurate. It suggested a very narrow colonial focus on our past, which was out of place in post-colonial South Africa. Moreover, it was misleading as it did not reflect the national range of our volumes and suggested that we were a Cape and not a Southern African society. For these reasons, in 2017 the members of the Society decided to a change of name to HiPSA, Historical Publications Southern Africa (formerly Van Riebeeck Society)/Historiese Publikasies Suider-Afrika (voorheen die Van Riebeeck Vereniging).

In its 100 years the Society has published accounts by a wide array of authors, including travellers, explorers, officials, missionaries, soldiers, activists, settlers, journalists, botanists, shipwreck survivors and politicians. In most cases, if the original was not in English (i.e. in languages like Dutch, Afrikaans, seTswana, isiXhosa, French, German, Swedish, Russian, Latin or Norwegian), an English translation was provided too, to make the work accessible to as many readers as possible both locally and abroad.

We are well aware that we live in an era of changing technology. We have explored digital options and published several eBooks, but, for the present, we expect to continue to publish hard-copy volumes edited to a high academic standard. At the same time, we want our volumes to be readable – enjoyable to all South Africans who have an interest in how our country was made. That was our original mandate – and it remains so. 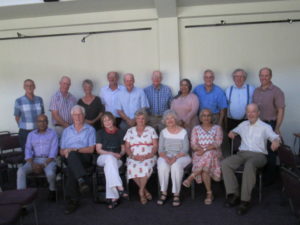