A B Xuma. Autobiography and Selected Works

A B Xuma. Autobiography and Selected Works

Alfred Bitini Xuma was born at Manzana, a village in the Nqobo district of the Eastern Cape in 1893. Neither of his parents received formal education but Wesleyan converts saw to it that he received mission education. He proved to be an excellent student, and in 1911 he qualified as a primary school teacher at the Clarkebury Institute, where he helped organise a student protest against inequalities in African education. He left for the United States where he spent thirteen years qualifying as a medical doctor, augmented by qualifications in obstetrics, gynaecology and surgery at the Mayo Clinic in Minnesota. 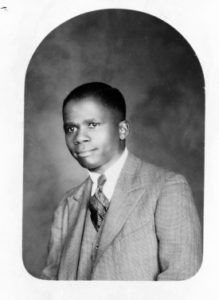 Upon his return to South Africa in 1927, Xuma joined a mere handful of black physicians in private practice, establishing his practice opposite the magistrate’s court in Johannesburg. At first, he remained formally aloof from politics and twice declined leadership positions in the then-lethargic African National Congress. In 1940, however, he agreed to stand for the ANC presidency and won it by the narrowest of margins. Under his leadership, the organisation was rebuilt, expanded, and ties with African unions were strengthened, arguing strongly for their legal recognition. He wooed the youth but his relationship with the Youth League was never easy due to their militancy that he could not condone, and this eventually led to his resignation from the ANC executive in 1950. 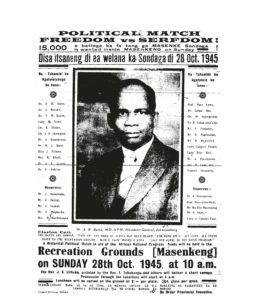 Xuma is best known as the president who revived the ANC in the 1940s and was then defeated for office by the Congress Youth League. Less known is his important public career as a medical doctor and social reformer, or the continuity of his thought over three decades of writings and speeches, in which he articulated a consistent critique of white domination, inequality and state policies of segregation and apartheid. Xuma’s ongoing concerns with national liberation, health, and black identity lend his works a curious resonance with today’s burning issues. This volume brings together for the first time the works of this major African political and social leader of the mid-twentieth century, combining his previously unpublished autobiography with a careful selection of his prodigious output of letters, speeches, pamphlets, and submissions to government commissions.

The subjects he treats range across politics, health and medicine, the pass laws, gender, beer, taxation, housing, education, crime, trade unions, conditions in Alexandra, international affairs and the onset of apartheid. He narrates his own life and that of comrades and friends such as Charlotte Maxeke and the great Xhosa poet S.E.K. Mqhayi. The book opens new perspectives on Xuma’s life and times, and on related themes of medical, social, and ANC history.

[….]  “Many who dare to criticise the hierarchy have been expelled or ‘liquidated’ individually or en masse without a democratic hearing. This attitude is foreign to Congress as a democratic movement and smacks of totalitarianism or authoritarianism which a movement like Congress cannot countenance and still claim to be fighting for freedom from domination and suppression.

(d)  The Congress leadership seems to have turned their backs against the African National Congress Nation-building Programme of the 1940s and have even forgotten the Congress Charter of Human Rights ‘The Africans’ Claims’ in South Africa of December 16, 1945, which can only be superseded by the Charter of Human Rights of the United Nations instead of other vague, inconclusive so-called charters, which merely defer and confuse the Africans’ just and immediate claims.

Congress agreed in 1946 to co-operate with other non-European fellow nationals on all points of common interest but insisted that the respective national organisations must maintain their identity as integrated regiments in the struggle for common citizenship. This was intended to make each organisation play its full part in the struggle and bear the necessary sacrifices. It was to avoid the danger of sections using others without making sacrifices themselves.

Many of the delegates are new in Congress. To them I say: Ask the old stalwarts with whom I have struggled in the forties where we stood then.

Above all, ask my ‘Kindergarten Boys’ [A derisory reference to ANCYL leaders such as Oliver Tambo and Nelson Mandela.] of the African National Congress Youth League whose foundation representatives met with me in my library at home and were baptised and established by me and the late Mr. R.V. Selope Thema at the BMSC in Johannesburg as the African National Congress Youth League, what they stood for. To them I say remember the 1940s, Remember Africa!

(e)  By acting on the principle ‘of action for action’s sake and for propaganda reasons’ instead of aiming at achieving results, Congress, through the Defiance Campaign, the Western Areas Removal Scheme and the School Boycott, the Congress aroused vain hopes in the breasts of the struggling Africans and made promises of ‘secret weapons’ and ‘provision of services’ for which no preparations were made.

It will be wise for Congress not to embark on revolutionary tactics unless the leaders with the rank are prepared to pay the price. If leaders arouse the masses and the leaders then fail the masses in the testing hour the loyalty and faith of the masses is shaken in the leadership, and what is worse, in the Organisation itself.

Such actions, under the circumstances, tended to set the clock of our progress back many years. I appeal to the Annual Conference to rescind its resolution of School Boycott.

With no effective alternative system of education, the boycott of schools with its interference with children and teachers, is bound to be worse for African progress than Bantu Education; in fact, it is not only negative but harmful in that in the long run, it will cause the African people to turn against the ANC.

I must appeal to all delegates to make this Conference one of the most constructive conferences, for examination and re-assessment of our methods, policies and attitudes. One and all must realise no one else will ever free the Africans but the Africans themselves.

Their genuine friends can help them, but the Africans themselves must rely on themselves. We must learn to do things for ourselves in order to grow, to plan our programme and campaigns and rely upon our own leadership.

Until we can do that, have faith in ourselves as well as self-reliance, depend upon our inner strength, we do not deserve freedom and could not maintain it if it were offered us on a platter. Let us re-organise our people, re-integrate the African National Congress as the mouthpiece of the African people.

We must organise ourselves not against other nationals, or to gain anything at anyone else’s expense, but only that we must gain strength in our unity because ‘charity begins at home’ and there can be no internationalism without nationalism.

‘Right not might, freedom not serfdom’. Yours for the cause, A.B. Xuma.

Peter Limb is Adjunct Associate Professor of History and Africana Bibliographer at Michigan State University. His recent books include The ANC’s Early Years: Nation, Class, and Place in South Africa before 1940 (Pretoria, 2010) and the edited volumes The People’s Paper: A Centenary History and Anthology of Abantu-Batho (Johannesburg, 2012), Grappling with the Beast: Indigenous Southern African Responses to Colonialism, 1840-1930 (Leiden, 2010), and Orb and Sceptre: Studies on British Imperialism and its Legacies, in Honour of Norman Etherington (Melbourne, 2008). Other publications include Nelson Mandela: A Biography (2008) and works on the international anti-apartheid movement. He co-edits with Peter Alegi the popular podcast series on history, culture and politics, Africa Past and Present (afripod.aodl.org). In 2012 he received the MSU Distinguished Faculty Award.

Peter Limb’s interview on “Africa Past and Present”: at http://afripod.aodl.or

Another interview with Peter Limb on SAfm at http://www.youtube.com