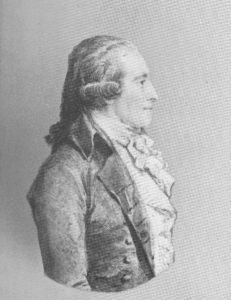 The young Swede, Anders Sparrman (1748 – 1820), was the first traveler to give an extended and readable account of travels into the interior of the Cape, between 1772 and 1776. As a student of Linnaeus, he was particularly well qualified to explore the rich floral heritage of South Africa. Although he trod familiar paths, his fresh and lively comments offer valuable insights into life in Cape Town, into the flora and fauna of the interior and the indigenous people whom he encountered.

In this volume he travelled from Cape Town via the “Warm Bath” (today’s Caledon) on to Swellendam and then to Mossel Bay. From there the journey proceeded along the Langkloof Valley and into the Tsitsikamma forests. In the second volume of Sparrman’s travels (VRS II-7) he completed his journey through the eastern parts of the Cape, eventually reaching the Fish River.

Sparrman became increasingly interested in the indigenous Khoi and Xhosa people whom he encountered, commenting extensively on their lives. and the volume includes ‘Hottentot’ and ‘Caffre’ vocabularies. Apart from its botanical and zoological value, Sparrman’s work contributed significantly to our knowledge of eighteenth-century indigenous societies. The animals he encountered were evidently to him among the most rewarding incidents of his travels. This enthusiasm has outrun his discretion as to what would constitute a fair proportion of space in this topic for the average reader. 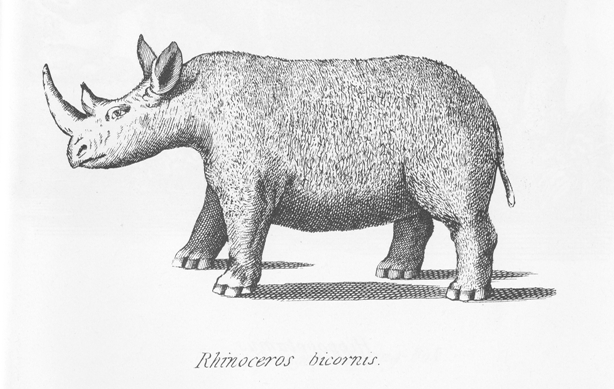 Plate of a Rhinoceros that appeared in the original Swedish Edition

Sparrman was led on by the attraction of something strange and wonderful and keeping in mind what his readers would be interested in. He therefore devotes a lot of space to the “Hottentots” and the San. His descriptions of these peoples are most valuable now because it is mainly due to written accounts such as these that our knowledge of their cultures have been enriched. 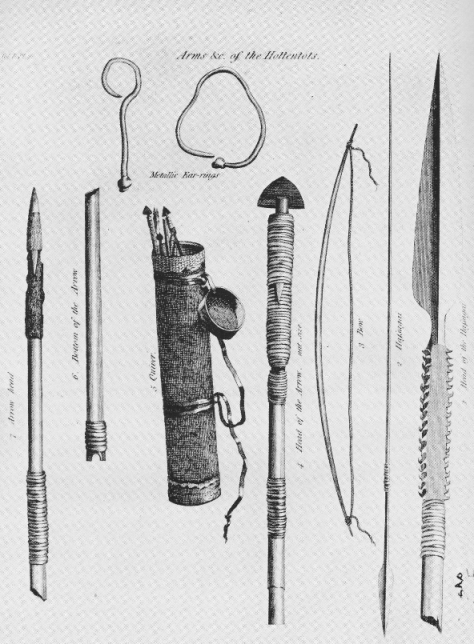 “Arms of the Hottentots” as appeared in the original Swedish edition

“At night we came to the upper part of t/Kurenoi, or Little Sundays-river. We fixed our resting-place at the distance of a few gun-shots from a clan of bastards, or Hottentot-Caffres, who are the offspring of the mixture of both these nations. They chiefly spoke the Caffre language, but had neither the large lips, robust, and easy form, nor the black complexion of the Caffres. They appeared to me not so swarthy as my own Hottentots, and I suppose, that they originate only from a set of people, who having acquired some cattle by servitude among the Caffres, had formed themselves into this society. The iris of their eyes was of a very dark brown hue, and almost, if not quite as dark as the pupil. They had a great quantity of cattle, and seemed to live very happily in their way. As soon as ever they had taken their cattle up from pasture they milked them; an occupation they inter­mixed with singing and dancing.

We seldom see such happiness and contentment as seems to be indicated by this festive custom, in a handful of people totally uncultivated, and subsisting in their original savage state, in the midst of a perfect desert. Mr. Immelman accompanied me, in order to behold with his own eyes the real archetype of that state of pastoral felicity, which the poets are continually occupied in painting and describing. We announced ourselves here likewise as being the children of the Company, and were received by them with a friendly simplicity and homely freedom, which, however, by no means lessened them in our thoughts as men. They presented us with milk, and danced at our request; at the same time giving us to understand, that our fame, as being a singular people with plaited hair, as well as flower-collectors and viper-catchers, had reached them long before our arrival.

We were spectators of their country dances, in which there was very little either of agility or art. While their feet were employed in a kind of stamping and moderately slow movement, every one of them between whiles made several small gentle motions with a little stick, which they held in their hands. The simplicity which prevailed in their dances was equally conspicuous in their singing, the following being all the words used to the tune of one of their country dances which I took down in writing at the time, Maijema, Maijema, huh, huh, huh. The former part of this was chaunted repeatedly piano by an elderly matron, who was answered by the young men and maids in the latter words, sung staccato by way of chorus. It must be confessed, that this concert was not well adapted to satisfy a nice ear; but however, it inspired a certain degree of joy and chearfulness, and was by no means disagreeable.

They had another kind of dance, which consisted in taking each other by the hand, and dancing gently in a circle round about one or more persons, who were placed in the middle of the ring, and whose movements were brisker and quicker; yet we could not help laughing, though at the same time we were not a little hurt, to see the poor infants pop their heads alternately in and out of the bags hanging at the backs of their mothers, who were likewise dancing; so that we had great reason to fear that they would break their necks. But what was still more ridiculous was, that these little Hottentots were far from shewing any dislike to this treatment; but, on the contrary, were so well pleased with it, that they sufficiently shewed their displeasure by crying, when their mothers, who were soon tired with carrying them on their backs, wanted to set them down, or go out of the dance.

Besides the pleasures which these daily dances may be supposed to afford them, they have at their greater festivals the more delightful enjoyment of voluptuous love, which, at those times, the youth of both sexes, by their laws, have full opportunity given them to pursue. For it is said, that the unmarried part of the company, in the very middle of the dance, withdraw to a private place in couples successively and at different intervals, without giving the least subject of offence and scandal, and without having any occasion to blush when they return again to the company. I have purposely said only, that opportunity is given them for this purpose; as I could not learn, whether their laws, together with the opportunity, allowed the action itself, which, as I have mentioned above, the Caffres permit themselves to transact in the presence of the whole company that is dancing.

This remissness of their laws, however, in allowing them opportunities of this kind, seems to be in direct opposition to the rigorous strictness of……”

Sparrman’s map of the Cape (1779) is a milestone in the history of South African cartography. In spite of its defects it was a great advance on its printed predecessors. 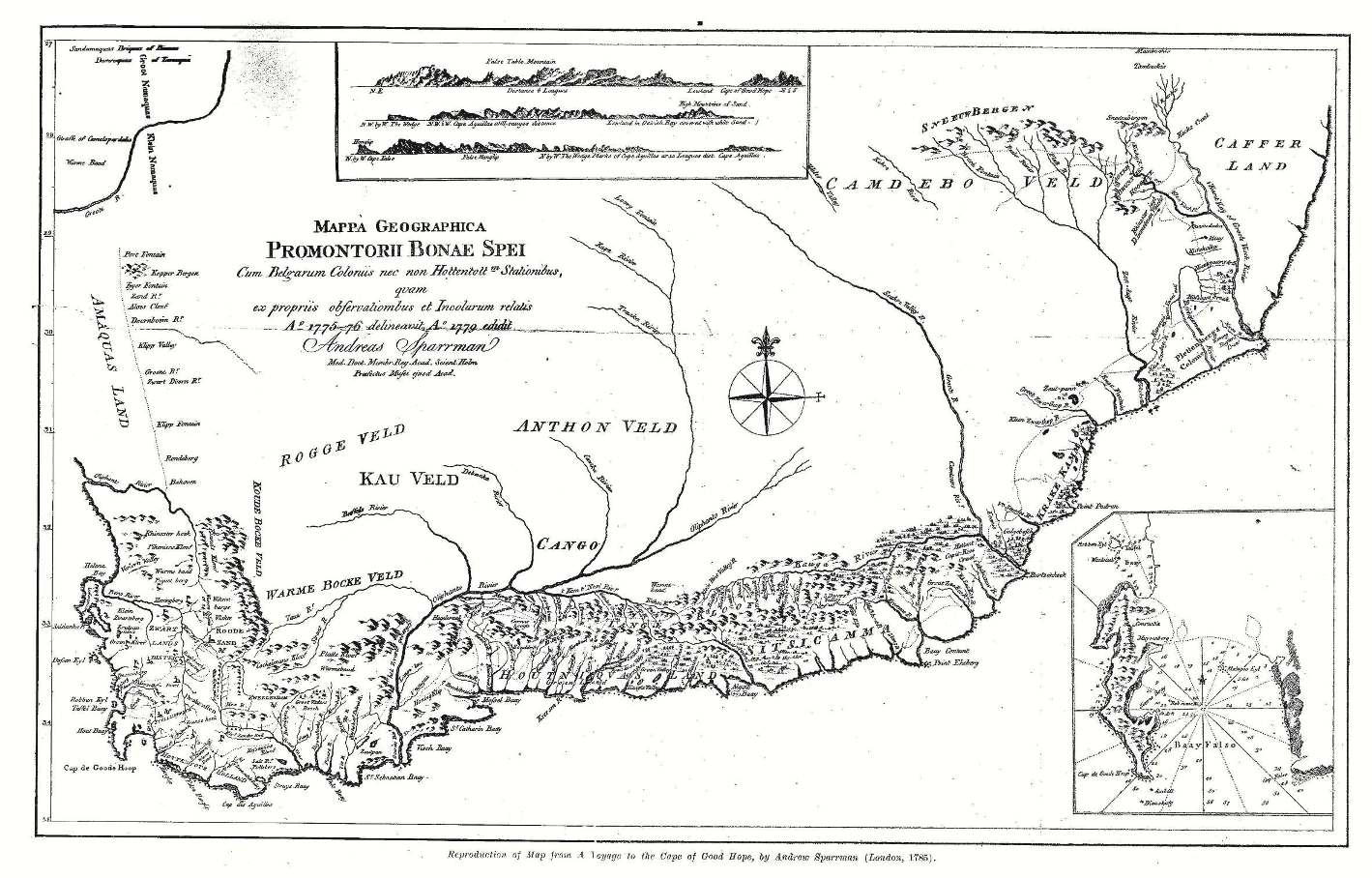 Maps of Sparrman’s two Journeys interpreted from his Journals

Prof Vernon S Forbes studied geology and mineralogy at the University of California and UCT and was awarded a PhD by the University of Rhodes in 1958 for his thesis sub-titled A Geographical Commentary upon Routes, Records, Observations and Opinions contained in Selected concerning Travel at the Cape, 1750-1800. He edited five volumes published by the VRS, including two on George Thomson, two on Anders Sparrmann and one on Carl Thurnburg.Forbes rendered distinguished service to the Department of Geology at Rhodes for thirty years as Lecturer, Senior Lecturer and Professor until his retirement in 1970. In recognition of an outstanding academic career in office and in retirement, Rhodes University awarded Forbes an Honorary Doctorate of Literature in 1989.

Translated from the Swedish by J and I Rudner

Jalmar Rudner, Swedish architect and town-planner, worked for the CapeTown City Council for 30 years, and on his retirement for the National Monuments Council as archaeologist. Ione Rudner (MA Natal) worked for the South African Museum for some 29 Years and in later years was editor in charge of publications. In their spare time the couple ran the archaeology department for 13 years, undertook numerous expeditions, research, and published extensively. They turned to historical studies, especially translating and editing the narratives of early Swedish travellers in southern Africa