François Valentyn (1666–1727) was sent out to the Dutch East Indies as a young man to work as a minister of religion. His interests extended to the natural world which he encountered in Indonesia and the Cape. Valentyn visited the Cape several times over a period of almost 30 years and observed the changes occurring in the fledgling colony over this time. As a passionate observer of facts rather than a true scientist, his work is packed with information. This volume is the first complete English translation of part five, Chapters 1 to 4 of Valentyn’s work, Oud en Nieuw Oost-Indiën (1724–26), in which his account of the Cape appears.

The abovementioned chapters mainly cover the lay-out of the Cape, the livelihood of the Burghers as well as the Journal kept during the journey inland by Governor Van der Stel in 1685.

He made extensive use of the work of other writers, often using their very words, sometimes with and sometimes without, acknowledgement.  Though copies of Valentyn’s original are extremely rare, the contents of part five have long been known to South African historians and linguists and have been used extensively as source material. 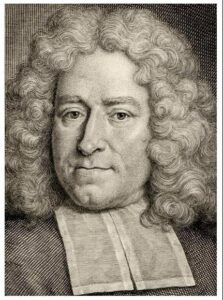 Born in Dordrecht in 1666 Francois Valentyn entered the university before his sixteenth year and had completed his examinations as candidate for the ministry by the time he was eighteen. Barely nineteen years old, he was sent to the East by the Dutch East India Company as a qualified minister of religion. Valentyn lived in the East Indies sixteen years where he also worked amongst the local inhabitants. He studied the Malay language and translated the Bible into Malay, but it was never published.

There is a difference of opinion as to Valentyn’s personal and scientific qualities. He clashed with many because of his stubbornness and irritating self-esteem. Valentyn’s use of the products of other scientists’ and writers’ intellectual labour, passing it off as his own, reveals a propensity, for self-admiration. Modern critics have accused of plagiarism. 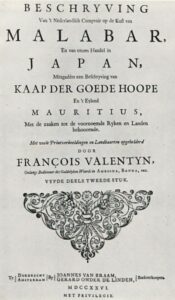 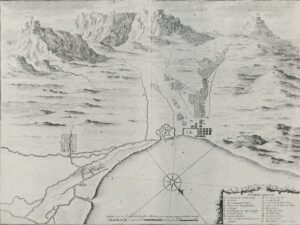 Lay-Out of the Cape

Valentyn stayed over at the Cape for short periods between 1685 and 1714. He did not have time to travel in the interior, the furthest points visited Stellenbosch and Hottentots-Holland in 1705 and for his descriptions of the interior relied on other writers. His map of the Cape is a prized possession and was the work of an experienced cartographer but was probably based on older maps and new information supplied by Valentyn. 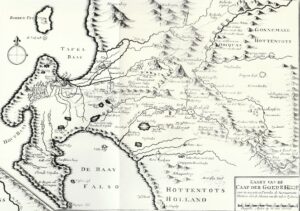 Portion of Valentyn’s Map of the Cape of Good Hope

……them to the sail-maker in our ship, when in 1695 I journeyed homewards He as an old man had the misfortune to lose his ship, named Stavenis, on the 16th of February 1686, having sailed from Bengal on the 18th of De­cember i685. This was due to mere carelessness of the Mate, who was on watch and was twice warned of heavy breakers ahead by the look-out and by the people on the forecastle-head, but who threatened to kick their backsides since they were fully 200 miles from the coast. Thus they were wrecked on the mainland of the Cape, but still very far from the Table Bay. All the crew got ashore except for 13 who were lost or drowned in the heavy surf. The Master, Willem Knyf, was no sooner ashore than some Hottentots came to him, and informed him that somewhat further North a ship had been wrecked, with white men aboard, which they took to be English. With these they resolved to build a vessel from the pieces and scraps, and sail her to the Cape. This being done, the Master, Knyf, sailed with 10 sailors and some Englishmen, reaching the Cape at the beginning of March; but the rest of his crew, about 48 in number (among whom was this sail-maker) did not dare to sail in this vessel, and went inland, to see if they could thus reach the Cape.

As soon as they were come somewhat inland they met some cattle-owning Hottentots, who not only received them in a very amiable and friendly manner, and fed them for 2 years with the meat and milk of their beasts, but also showed them all imaginable friendship and affection to the best of their ability, and at last brought them safe to the Castle.

By their long stay among these Hottentots most of them had learnt their language, and there were also some, who (for lack of better) had so far become intimate with some Hottentot women, that they had fathered some children on them, and some of these, in acknowledgment of the love and trust shown them for 2 years, had been moved not to abandon these Hottentot women (as did their comrades) but rather to remain with them for the sake of the children they had already had by them, as also they indeed did thus remain……