Drawing on a wide selection of sources, this volume seeks to investigate the controversies surrounding the execution of ‘Breaker’ Morant and his two Australian compatriots. It explores not only the murders associated with Morant, but looks at the context in which the Bushveldt Carbineers were recruited and operated. It remains one of the most scholarly works on the subject. 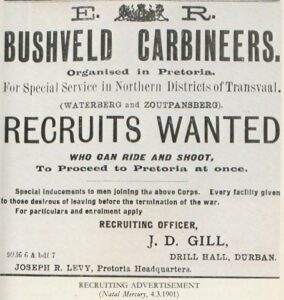 Morat set off in hot pursuit of the retreating Boers and, in the first act of vengeance, had a wounded captive shot without proper trail. Morant was accused of the summary execution of Floris Visser, a wounded prisoner of war, and the slaying of four Afrikaners and four Dutch schoolteachers who had surrendered at the Elim Hospital in the Soutpansberg. He was further accused of killing a South African-born Minister of the Berlin Missionary Society.

Major Lenehan the Bushveldt Carbineer’s, commanding officer, Morant and others were taken into custody and an exhaustive inquiry was instituted. The outcome of the courts’ verdicts was that Morant, amongst others faced a firing squad. 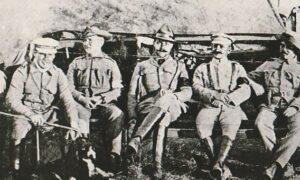 BEFORE THE STORM (Lt Morat on the left)

The Bushveldt Carbineers came into being early in 1901 for a particular purpose – the subjugation of an outlying area of the Northern Transvaal in which there was sporadic guerrilla activity. Early in March the first recruits were being sent to Pretoria from Durban. There were later appointments of officers that were to prove significant, the commissioning of HH Morant “gentleman”, as lieutenant on 1 April

As many of the volunteers for the first phase of the war were time expired and homeward bound, were active recruiting centres. 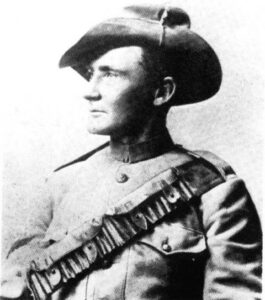 Explanations of alleged verbal orders from Lord Kitchener that prisoners were not to be taken were invoked to persuade reluctant BVC rankers to carry out drastic orders. Remote from any immediate scrutiny of their doings, a small group of officers ruled by intimidation and directed or undertook the killing of groups of surrendered Boers and even of one of their own men.

The execution was implemented by a a firing squad from the Cameron Highlanders on 27 February 1902.

Major Lenehan, the commanding officer of the Bushveldt Carbineers, and most of the officers were Australians. Morant and Handcock, one of his compatriates, have become folk heroes in modern Australia, representing a turning point for Australians’ self-determination and independence from British rule.

“…..follow up any clues that came to light, not an easy business. But luckily they were so afraid of Taylor and the Carbineers that they became more cautious than we had hoped for.

I thought out a method of payment for services rendered which worked well in spite of its apparent improbability of success. A reliable “boy” went every week into the Spelonken to visit the “boys” who were giving infor­mation; he had to play cards or some native game for money, say 5/- to 10/-, with the agent and to lose this amount to him, never more. The agent was told of a subsequent reward when the work was completed. A method was adopted of checking this by the next “boy’s” visit. In spite of the improba­bility of success of which I was only too well aware, it worked remarkably well, and over a period of several months only once was one of the “boys” caught out in trying to cheat.

Our “boys” took a keen interest in getting information, but unfortu­nately it was only that of natives. The great difficulty was to get evidence from white men. We succeeded in this eventually to a certain degree, but in the case of the murder of the Rev. Heese there was little probability of this as the only witness was Morant’s “boy”.

After Morant and Handcock had left the Cape cart at Bandolier Kopjes jammed between the trees and the telegraph pole, they separated. The evidence however proved that Handcock had been seen in the neighbour­hood of the murder and only returned to H.Q. for his supper.

An amusing incident occurred after a game between our “gambler” and a “boy” who was well-known to the Rev. Reuter of the Medingen Mission not far from Fort Edward. The Rev. Father on one occasion met our man and gave him a severe lecture on the wickedness of gambling (no doubt with a twinkle in his eye) and threatened to report him to Fort Edward. I haven’t a doubt that he had some inkling that the matter was not dead as we had tried to make it appear, because I received a mysterious and anony­mous warning that under no circumstances must “Captain de Bertodano” ever set foot in the Spelonken. Thinking that this emanated from Bulala Taylor, I was foolish enough to consider doing so, in fact had actually set out on one occasion with a patrol from Pietersburg, but was the same day recalled by H.Q. to Pretoria. It was only a little later that I found that the warning was genuine and concluded that my unknown friend was Father Reuter: I always regretted never having met him: a fine man.

(The only reason for supposing that some one objected to my presence in the Spelonken was that I had some time before caught out a Staff officer in Pretoria who had betrayed important information to the Boers: this caused considerable stir and my name had been bandie~1 about in connec­tion therewith. (I had and have always disliked the “lime light”:) The officer in question was kicked out of the Services. Lord Kitchener tried his best to have him tried by Court-martial but the then Prime Minister, Arthur Balfour, was afraid of the scandal.)

For months we worked hard to collect the necessary evidence to convict Morant and Handcock for the murder of the Missionary. Morant’s “boy” was the only witness who saw the murder so far. We tried to get this “boy” ~p Pietersburg for safety but could not manage it without rousing suspicion.

Whether Morant had some suspicion that enquiries were going on or not, I cannot say, but when he went on leave to Pretoria, his “boy” did not accompany him except that he left Fort Edward with Morant. At any rate ~e “boy” was not with Morant when he arrived at Pietersburg. We were never able to find any trace of the unfortunate lad and came to the con­clusion that he had been shot. When the trial took place, enquiries were made at all the locations (Magatos, etc.) and a reward offered, with no effect.

The evidence of the shooting of the Boers who had surrendered under ~e white flag, caused little trouble as the facts had been admitted by the accused. But in the case of the murder of the Rev. Heese, no direct white evidence could be procured. Morant and Handcock were found “Not ~1ilty”. I do not think that there was a man on the Court-martial who did not but believe that they were guilty. Had we been able to find Morant’s boy”, his direct evidence would have perhaps completed the case.

I was in Pietersburg during part of the trials, but did not attend them, even that of the Missionary: being primarily responsible for having sent the poor man into the Spelonken, and savage at his cold-blooded murder, I thought it better to keep away.

One afternoon walking through the Camp, I met Morant out for exer­cise with a young Lieut. of the Wiltshire Regiment (dark red hair, but whose name I forget). The following is the conversation which ensued between Morant and me. I cannot, of course, recall the exact words and sequence of these, but I have never forgotten the effect of them. Morant came up to me and said that his trial for the shooting of the missionary was a scandal and a disgrace to the Army, that he was innocent, that he had been selected as a victim because he had shot a few d…d Boers. “You are the man who has worked up all the evidence and you ought to be ashamed of yourself for the betrayal of your brother officers.” I replied very quietly, “Morant, I am very proud of having been the cause of bringing you to trial. You know in your heart that you and Handcock murdered poor old Heese because you were afraid that he would report the shooting of the Boers in cold blood. But you were such…….”

Edited, with commentary by Arthur Davey
After a period as a career civil servant and archivist, in 1960 Arthur Davey was appointed as a history lecturer at the University of South Africa. At the time of his retirement he was Associate Professor at the University of Cape Town. Dr Davey’s publications include The British Pro-Boers, 1877-1902 (1978) and The Defence of Ladysmith and Mafeking (1983).