This diary, kept by Adam Tas from June 1705, is the work of an engaging and genial man and describes the comfortable life of the emerging Cape ‘gentry’ as well as the drama leading up to the arrest of Tas as the ringleader of a plot to upseat the Governor Willen Adriaan van der Stel. The arrest of Tas in February 1706 brought the writing of his diary to an abrupt end. 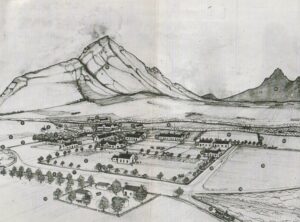 He is best known for the part he played in the free burgher conflicts with the Governor Willem Adriaan van der Stel, concerning the corruption of VOC officials and their misuse of trading monopolies. Tas and Hüsing drafted a petition, accusing local VOC officials of abusing the VOC’s trading monopoly, and managed to persuade 63 of the 550 Cape free burghers to sign it. Without informing the local officials, the signed petition was sent directly to the VOC headquarters in Amsterdam. When van der Stel discovered the conspiracy, a frantic persecution of the colonists started. Tas was arrested on 28 February 1706, escorted in chains to Cape Town, and convicted. There he lay for thirteen months and seventeen days, until April 16, 1707, when the decision of the Directors of the VOC upon the complaints of the colonists eventually reached the Cape. Tas and his fellow prisoners from amongst the colonists were at once set at liberty.  Tas settled down quietly upon his homestead at Stellenbosch, the name of which he altered upon his return to Libertas.

Adam Tas (1668–1722) was an early Dutch free burgher, farming in the Stellenbosch district. He was born in Amsterdam and came to the Cape when he was 29. He took up his quarters with his uncle, Henning Hüsing at Meerlust close to Stellenbosch. After a period working as a clerk for his uncle, he received his commission as Ensign in the Cape Burgher Infantry in 1699. He married Elizabeth van Brakel a wealthy widow a who owned a collection of farms in the district. 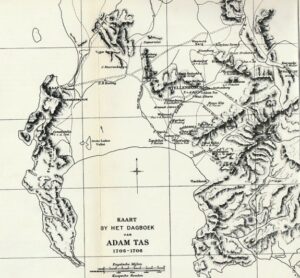 Map of the Cape Peninsula and Stellenbosh 1705-6 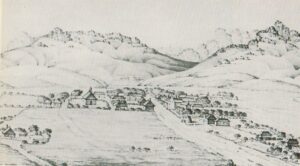 The VOC dismissed van der Stel and ordered his return to the Netherlands (23 April 1707). VOC officials were subsequently forbidden to own any land at the Cape of Good Hope.

these two days of rain in the middle of the dry season, as this is a most uncommon occurrence, which has likely never occurred before. I was also told that Mr. Mahieu, the sick-comforter, has suffered great damage caused to his new house by the heavy rain, which he estimates at f.1000, but he is probably guilty of exaggeration. They tell me that a chimney or two, besides an oven, has fallen in. Who knows what this new house, which has already been under construc­tion for such a longtime, will cost before it is finished. The house is as tedious in the manner of its construction as the man, who is having it built, is tedious, in all matters, even in his manner of speech.

Monday the 28th. Calm, pleasant morning. I was told this forenoon that at Vergelegen, the spacious homestead of the Governor, a large outbuilding collapsed as a result of the rain aforesaid, which cost the lives of 4 or 5 Hottentots, while some sheep also perished. This afternoon I was at the home of Hans Contreman, where I was told that some malicious or rather ignorant persons were speaking of uncle Husing in a damnably bitter manner. Among other things it was said of him that he was a traitor and corrupter of the citizens, and now that new butchers have been appointed, they mightily rail upon the multitude of his cattle, saying that they will yet be eaten by the crows, and that he will yet become a poor man, and more such lewd and scurrilous talk. It has further been said of my uncle that he is a malefactor or mischief-monger at the Cape, and of me they have said that I am another such at Stellenbosch, all of which libellous accusations and palpable falsehoods obviously emanate from the Governor alone and are intended to incite the people against uncle Husing and me; indeed, the infamous wretch would gladly make away with us if he could; the damned tyrant has for years oppressed and fleeced the burghers in an unheard of manner, with the result that they have become almost refractory, and now the impudent slanderer seeks to shift the blame from himself and to besmirch honourable men in such a manner. O tempora! O mores! Yet we may hope that the God of righteousness will one day bring……