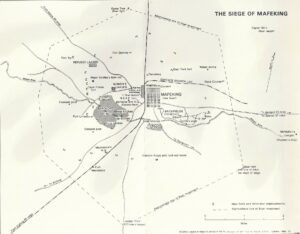 Even before the South African War started on 15 October 1899 work to build defences around the perimeter of Mafeking started and Boer forces began to besiege the hamlet of Mafeking. Under the command of Robert Baden-Powell, a charismatic cavalry officer, the tiny British garrison managed to hold out for the next eight months. 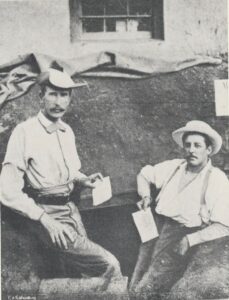 At the end of the nineteenth century Mafeking had little to distinguish it from any other trading settlement and village in South Africa. Situated on the railway line from Bulawayo to the Cape, and almost on the Transvaal border, it consisted of a station and the usual straggling collection of low mud-built houses and stores, roofed over with corrugated iron. Half a mile to the southwest, on either bank of the Molopo River, lay the round huts of the Barolong settlement. 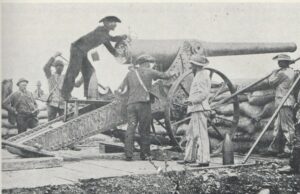 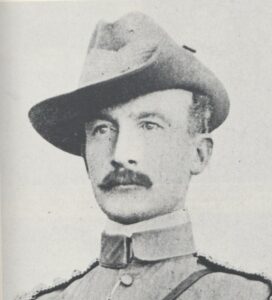 A well-established resident of Mafeking was Edward Ross who kept a diary during this period which for the first time is published here.  He was an auctioneer by trade and a member of the local Town Guard in 1899 and 1900. Ross provides a very different view of the siege, the colonial and imperial goverments as well as Baden Powell and his staff in particular. Ross was also a keen and proficient amateur photographer, and took a large number of photographs during the siege and is well-known for his role in the production of banknotes during the siege, using woodcut printing and backed by the Mafeking branch of Standard Bank of South Africa. 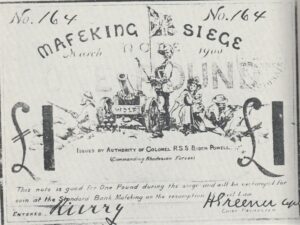 ……..and it was only by stealth I managed to get enough. I had a little signboard printed, “Mafeking Mint. No Admission”, but this was regarded by everybody as a joke, most people saying, “Well, if there’s no admission, I’m going in to see what’s going on,” and sometimes when the bell rang the “Mint” was packed. Not much use trying to keep it private. Of course everything did not work smoothly; for instance, one morning Greener sent me a batch of paper, and only in the light could it be seen that he had got hold of some old B.B.P.~ notepaper with their crest at the top. Naturally this could not be used, and so a fresh batch had to be made the next evening.

This note business is going to be a good thing for the Government as I am sure they will be worth much more than face value as curios after the siege, and people are collecting as many as they can get hold of now, to make money afterwards, and as I have made 620 that means about £6oo clear profit for the Imperial exchequer! And that’s how the £1 note was made.

I have by the courtesy of the staff been able to verify my figures re Big Ben’s shells, and find the total number fired at us is 1 379. And this is the gun they told us could only fire about 200 shots. Now multiply this by 94 and you get nearly 6~ tons of cast iron hurled at us by this one gun alone. Now add to this the armament they continuously used, namely, one 12-pounder Krupp, one 10-centimeter French gun, one 9-pounder, one 7-pounder, one 5-pounder Snider, one Hotchkiss, one 1-pound Maxim, from 8 000 to 2 000 (at intervals) Mausers, Lee Metfords, Martini-Henrys, Snider and Joubert elephant rifles and tell me if you can possibly conceive what it was like once or twice when the whole lot were being used at the same time. Did you ever have your head in an elephant’s mouth when he sneezed? Because if you did, you might compare that to a cat miaowing, to what the other is like. There is absolutely nothing in the world that one can compare with it, except the same thing going on somewhere else. Of course, we have had a much softer time since Big Ben has gone, but what I want to know is, who gave the bally Boers permission to take that gun away? That gun belongs to Mafeking, and we are going to have it stuck up in the Market Square or else there’ll be a row. We resent their interference with what we now consider our property, and we will have it too.

You’ll no doubt remember we’ve had a Good Friday during the siege well, our baker, who I suppose has a bit of humour in him, reminded us of the fact by putting a cross in the shape of two rough furrows in our daily ration of hard-baked horse oat bread. This stuff we have got to eat or go without anything at all, and is made out of badly crushed oats, with half the husks left in just to give you something to do in the way of picking your teeth, taking the sharp pointed pieces out of your gums with a pair of tweezers, etc. It is made into a sort of round dog-biscuit about inches in diameter and half an inch in thickness. If you break a piece off the husks stick out in such a manner that it makes a splendid substitute for a toothbrush. But it is not good from a really serious point of view as believe it has already sent one or two to the hospital with “perforatin [sic] of the bowels”. Talking of eating, the horsemeat is really not so bad, jus a little sweet that’s all. What we do is to put our biscuit and our mea ration into a pot with some water and let it cook for three or four hours. This soup we have for one meal in the morning and the balance for dinner late in the afternoon, that fixes us up until the next morning. Sometimes we get a snack of lunch in the shape of “Brawn” made from the following: horse hoofs, horse heads, cow hide, donkey meat, carpenters’ glue, spice and split peas. One cannot get through very much of this, but the native seem to highly appreciate it and get full up with it. I think everything it the place has been eaten except horseshoes and barbed wire. I of course must not forget our “Sowen porridge”: this is a skilly made from fermented oats; this is not very palatable, but it fills the vacuum for a couple of hours. When this was first made everybody, white and black, turned up their noses at it, but now it is, “Please give me a quart of sowens,” for which you gladly pay your sixpence.

On the eating tack reminds me that some artful johnny has managed to keep a fowl down in his dugout all this time, and he has now sold it by auction and has put into his pocket the nice little sum of 30/-.

I want here just to say a word or two in favour of our womenfolk. They have indeed behaved well, untiring in their devotion to work at the hospital, each one in the town trying to do their utmost in eking out the ration for their husbands, their children, and themselves, without [sic] hardly murmur of complaint. The Sisters of Mercy at the convent proving them selves the nearest relations to angels it is possible to be on this earth. The young ones helping the old, and so on, keeping up the men’s spirits when desponding moods come on, and always doing their level best to brighten things generally. What will be done for them after the siege? Surely they

Edited by Brian P. Willan
Brian Willan has also edited the diary of Solomon T Plaatje, court interpreter in Mafeking during the siege, as well as writing his biograph. In 2020 he was co-editor of Sol T Plaatje – A life in letters, HiPSA Volume III-2.