Francois le Vaillant: Travels into the interior of Africa via the Cape of Good Hope. Vol I

Francois le Vaillant: Travels into the interior of Africa via the Cape of Good Hope. Vol I

François Vaillant was born in Suriname (Dutch Guiana), the son of a French lawyer who was the French Consul in the Dutch Colony. Growing up amid forests, François, like his parents, took an interest in the local fauna, collecting birds and insects. His family returned to France in 1763 when he was 10 years old.  In 1772, François joined the Berry cavalry regiment as a cadet officer in Metz but was eventually rejected as an officer because he was not tall enough. He married and moved to Paris in 1777. Presumably he intended to make a living out of the trading of bird and other natural history specimens, which he preserved using an arsenic-based soap developed by a friend of his. By 1780 he had established a reputation as a bird taxidermist and collector in Paris. 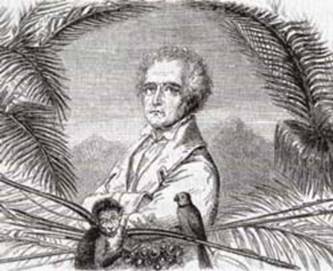 In 1780, he set out from Holland for the Cape to collect specimens of birds and animals from this distant and (to him) exotic region. Le Vaillant (as he renamed himself during his travels) is justly famous as the founder of South African ornithology. Still, he was far more renowned and influential in his time for writing the book “Voyage dans l’intérieur de l’Afrique”  (“Travels”) that appeared in 1790 and put South Africa firmly into the European imagination. In France it was warmly reviewed by the Moniteur, the publication of the Revolutionary Parliament. At the same time, King Louis XVI, an avid hunter, had a lavish map based on the travels specially commissioned for him. 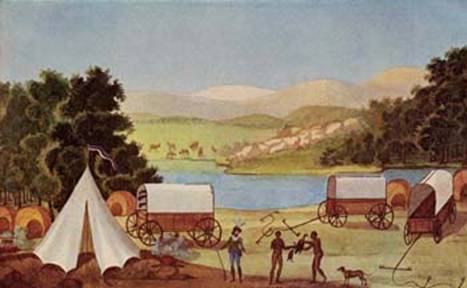 “Travels” was republished numerous times in France and rapidly translated across Europe, becoming one of the most influential pieces of writing about South Africa ever. It was the first lavishly illustrated account of a hunting expedition; the first safari or travel account that used the freedom of wilderness to attack civilised conventions; the first highly critical account of Dutch colonialism and the brutality of settler expansion; the first detailed ethnological account based on fieldwork. Though Le Vaillant’s account influenced significant South Afican literary genres and themes, the book itself has long remained out of print in English and French. Here a new translation of volume one is prefaced by an intoductory section that places Le Vaillant in his historical and intellectual context and discusses the literary and historical importance of the Travels.

This first volume of Le Vaillant’s Travels into the interior of Africa via the Cape of Good Hope is taken up with an account of his journey eastwards to Kok’s Kraal, on the western bank of the Great Fish River where he remained between October and December 1782. The second volume, that will be published shortly as HiPSA Vol III-3, is very different, and is substantially given over to a description of the indigenous peoples that he encountered at Kok’s Kraal.

“I noticed a young girl of sixteen. Lost in the crowd, she demonstrated less eagerness to have a share of the jewels that I was distributing to her companions than curiosity about my appearance. She was looking at me with such obvious interest that I went nearer to her to give her all the time to look at me at her leisure. I found her figure charming. She had the healthiest and most beautiful teeth in the world, she was elegant and slender, and the sensual curves of her body could have made her a model for the brush of Albani. She was the youngest of the Graces in the guise of a Hottentot.

The impressions made by beauty are universal.   It is a sovereign whose empire is everywhere. I could feel by the lavishness of my gifts that I was swaying a little under its power.   My young savage soon got used to me.   I had just given her a belt, bracelets, a necklace of little white beads that seemed to delight her. I took a red handkerchief from my neck and she wrapped it around her head. With this adornment she was, as one might say in elevated language, adorable. I took pleasure in dressing her up myself.   When her toilette was finished, she asked me for some jewels for her sister who had stayed behind with the horde.   She pointed out her mother and told me she no longer had a father. I burdened her with questions as I found her responses so charming.   Nothing could equal the pleasure I had in looking at her, unless it was my pleasure in hearing her. I asked her to stay with me and made her all sorts of promises, but when, in particular, I talked to her of taking her to my country where all the women are queens and rule over large hordes of slaves, far from letting herself be tempted, she rejected my proposition out of hand, openly making several impatient and angry movements. A monarch could not have overcome her resistance and the sorrow that the very idea of leaving her family and her horde caused her. Eventually I begged her to bring me her sister at least, who would in her turn have reasons to be satisfied. She promised me this. At that moment she looked intently at a chair near me. She showed me a knife that I had left there by accident. I hastened to offer it to her and she immediately gave it to her mother.

She was busy the whole time with her new trinkets. She touched her arms, her feet, her necklace, her belt, put her hand on her head twenty times to touch and feel her handkerchief that she liked so much.   I opened my toilet-chest and took from it a mirror that I placed before her. She looked at herself in it very attentively and even with self-satisfaction. She showed clearly by her gestures and her different poses how pleased she was – I do not say with her looks, but rather with her accessories which made a stronger and stronger impression on her.” 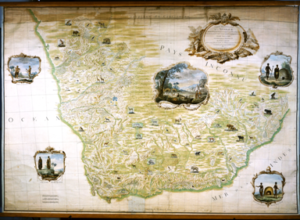 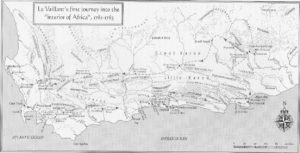 Edited and translated by Ian Glenn with the assistance of  Ian Farlam and Catherine Lauga de Plessis.

Ian Glenn is Director of the Centre of Film and Media at the University of Cape Town. He holds degrees from the Universities of Natal, York, and Pennsylvania. He has published widely on modern literature and African and South African literature, and is co-author of Francois Levaillant and the Birds of Africa (2004). He still hopes to find Le Vaillant’s missing travel notebooks.

Catherine Lauga du Plessis was born in Paris and studied English at the Sorbonne. She taught English at Lycée Honoré de Balzac, l’École Supérieure des Mines de Paris and the Sorbonne until 1976 when she came to South Africa where she taught in the Department of French at the University of Cape Town for 16 years. Her translations of South African fiction into French have won her several international awards. She holds the rank of Officier des Palmes Académiques.