Francois le Vaillant: Travels into the interior of Africa via the Cape of Good Hope. Vol II

Francois le Vaillant: Travels into the interior of Africa via the Cape of Good Hope. Vol II

François le Vaillant was renowned in his time for writing his two-volume Voyage dans l’intérieur de l’Afrique which appeared in 1790, thereby putting South Africa firmly into the European imagination. In France it was warmly reviewed by the Moniteur, the publication of the Revolutionary Parliament. At the same time, King Louis XVI, an avid hunter, had a lavish map based on the travels specially commissioned for himself. 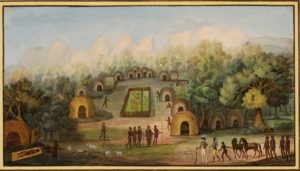 Le Vaillant and his party arriving at a Gonaqua village in 1782, to be met by Chief Haabas and his entourage

The first volume of Le Vaillant’s Travels, newly translated into English, was published by the Van Riebeeck Society as Travels into the interior of Africa via the Cape of Good Hope, Vol I, in 2007 (VRS Vol II-38). This first volume is taken up with an account of his journey eastwards to Kok’s Kraal, on the western bank of the Great Fish River where he remained between October and December 1782. It was a lavishly illustrated account of a hunting expedition and a highly critical account of Dutch colonialism.

The second volume of the two, also newly translated into English, is now published by HiPSA as Travels into the interior of Africa via the Cape of Good Hope, Vol II. This volume is very different from the first, being far more a description of the indigenous peoples whom he encountered at Kok’s Kraal. In this way, Le Vaillant speaks to the intellectual climate of Europe, feeding the Enlightenment reader’s hunger for the classification of knowledge across a broad spectrum of human activity. But the intellectual climate of the eighteenth century was complex, for, alongside the cult of reason, it also celebrated the unrestrained expression of emotion and the lyrical description of nature. Here again Le Vaillant provides his readers with the intriguing material they sought. In doing so he claims to be giving a truthful description of peoples and places. Yet, the authenticity of one whole episode in his narrative, his expedition across the Great Fish River, is profoundly suspect. It is equally unlikely that Le Vaillant wrote the final text of his narrative, alone, for it is full of the wit and indirect allusions that characterized good style in the Parisian salons, of which Le Vaillant had little knowledge. Overall, it is a complex and fascinating story, written by a complex and fascinating man.

For all of the reasons outlined above, both volumes of Le Vaillant’s Travels into the Interior of Africa via the Cape of Good Hope sold very well to his contemporaries: at least seven French editions appeared during Le Vaillant’s lifetime, and the work was quickly translated into English, German, Dutch, Russian, Swedish, Danish and Italian. 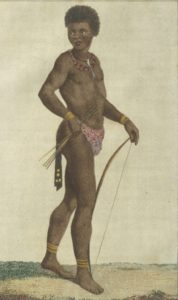 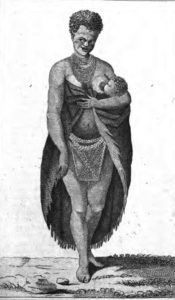 His accounts of the Khoekhoe and Gonaqua are particularly illuminating because of the length of time he spent in their company and the fact that, unlike most European explorers of this era, he took the trouble to learn the Khoi language, reaching what he felt was ‘a level that allowed me to be understood in very little time’. This meant that he secured not only an understanding of their words but also their trust, a fact which is readily apparent in the rare descriptions that his text provides of their worldview, their experiences, their opinions and their troubled relations with Xhosa and colonist alike.

To view a High Resolution Copy of the Map click HERE

Subsequent to the publication in 2021 of Le Vaillant’s Travels into the Interior of Africa via the Cape of Good Hope, volume 2, the editor, David Culpin, was able to identify two places mentioned in the text (page 166, footnote 435) as  unknown. They are as follows:

Wetwater: ‘Wetwater’ is a misprint for ‘Witwater’. The river’s coordinates are 33°34’0″ S and 19°43’0″ E. It lies roughly 27 km north-east of Worcester and runs across the route followed by Le Vaillant.

Constapel: According to E.E. Mossop, writing in 1927, the ‘route to the Bokkeveld Karoo by the Hex River Pass […] was not an unusual one a century ago and was the route followed by the Official Commission for Cattle Census of 1804’. He adds in a footnote, ‘The Constapel is a mountain (berg) which begins between the Verkeerde Valley and Buffels River at Touwsberg’. E.E. Mossop’, Old Cape Highways (Cape Town: Maskew Miller, 1927), p. 237 and note 1.

Erratum: On page xlii, lines 10-11, what should have been an editorial note (‘This sentence …. from Melanie’) was mistakenly included in the text. HiPSA apologises for this error.

“I had left my horse in the shade of a large tree, and it was there that they had come to compliment me. I remained there for only a few moments, in order to refresh myself, for it was with relish that I contemplated this interesting tribe, and I went towards them escorted by the whole troupe. As I passed by the huts which, like the huts of the Hottentots, have only a low doorway, the mistress of the place (who had at first shown herself in order to see me coming in the distance) immediately withdrew, with the result that I was continually obliged to bend down in order to inspect the interior. The sight of those brown, immobile faces, glued as it were against the wall at the back of the hut, and seen only in outline, was a most curious spectacle for me. I might just as well have left my visiting card with all the ladies, for I was received by none of them.

However, their shyness gradually dissipated, and in the end I was surrounded by them, each bearing a gift of milk. As Narina had not yet joined these curious ladies, I asked after her, and someone ran off to fetch her. She arrived carrying a container of warm goat’s milk which she came and gave me with great eagerness. I preferred to drink her milk, as much because of the naturally graceful manner in which she presented it to me as because of the care she had taken over the cleanliness of her vessel, which the containers of the other women were far from having.

Moreover these women, dressed in their best outfits, freshly decorated with grease, their faces painted in a hundred different ways, clearly showed both the stir that the news of my visit had caused among the tribe, and the particular consideration which they had for this stranger. Narina had adorned herself in the presents I had given her, but I was more than a little surprised to see that she had not adopted the same regime as the other women, and had not anointed herself as they had done. She knew how much I disliked this particular form of coquetry and, however difficult it might have been for her to set it aside, she had made this effort in order to please me.[1] She introduced me to her sister, who I thought was pretty; but whether it was because my feelings for another blinded me to her attractions, or because the smell of her cosmetic preparations repulsed me, I did not find that she had the same piquancy as Narina, and I felt nothing for her.

When I arrived at Haabas’s hut he pointed out his wife to me. There was nothing about her that distinguished her from the others, and I saw here (as is often seen elsewhere) that Madame la Commandante[2] was supremely old and ugly. Nonetheless, playing the part of the polite courtier, I presented her with a red handkerchief, which she received unceremoniously and immediately wound it around her head. I added a tinder box to this gift but, as I really wanted to discover what sort of things she liked, and since I really wished to see a savage woman struggling over the choice of her finery, I showed her my entire collection of glass trinkets, and invited her to choose for herself whatever she liked best. But I did not obtain the satisfaction for which I had hoped for she threw herself without hesitation on the white and red necklaces; the other colours being, she said, too close to the colour of her skin, produced no effect and were not to her liking. I have always noticed that, in general, the savages do not much favour black or blue. I also gave her some thick brass wire to make two pairs of bracelets, and it appeared to me that this was the item she liked best.

The other women were not without envy with respect to these presents: they raised their hands in ecstasy and, full of admiration, they declared in a loud voice that Haabas’s wife was the happiest of women and that her collection of jewellery surpassed anything yet seen among all the tribes of the Gonaqua nation.

Next I distributed the remainder of the glass baubles I had brought, and I openly confess that I gave the best pieces to the youngest and most beautiful women.”

TRANSLATED WITH AN INTRODUCTION AND NOTES BY D.J. CULPIN

D.J. Culpin is Extraordinary Professor of French at the University of the Western Cape and was previously Reader in French at the University of St Andrews in Scotland. He specialises in French literature and ideas of the seventeenth and eighteenth centuries, focusing on the literature of ideas and travel narratives. His publications include a monograph on Marivaux, a student guide to La Rochefoucauld’s Maximes (1995), and a critical edition of Charles Perrault’s Les Hommes illustres (2003), as well as articles in journals such as French Studies and the Revue d’Histoire Littéraire de la France. He has also published a translation and critical edition of the Narrative of the Shipwreck of the Eole by C.E. Boniface (2012), the first French book published in South Africa. Professor Culpin previously taught at the University of Hong Kong and the University of Wales, Lampeter, and has held Visiting or Research Fellowships at the Universities of Oxford, Adelaide, Cape Town and Johannesburg.