During tha 1750’s a coloured man called Adam Kok (ca1710-ca1795), a reputedly emancipated slave, acquired grazing rights in the Piketberg area and attracted a following from among the more vulnerable local groups, the remains of Khoi tribes, as well as Basters, the offspring of white fathers and Khoi mothers. Although the group was remarkably diverse – some spoke Siri, a Khoi language – their leaders mostly spoke a form of Dutch or Afrikaans. The Kok community was so numerous that Adam Kok (known as Adam Kok I) was officially recognised as ‘Captain’ or Kaptyn by the VOC authorities. 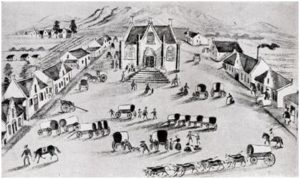 Under the pressure of white expansion they were gradually forced inland, first to Namaqualand and some of them later into the Transgariep. In 1801 the missionaries of the London Missionary Society (LMS) established themselves at a place called Klaarwater. In 1813 John Campbell of the LMS persuaded the Kok group to change their name, and they decided to call themselves “Griquas”, in commemoration of their Khoi (Chaguriqua) origin, while Klaarwater became Griquatown. 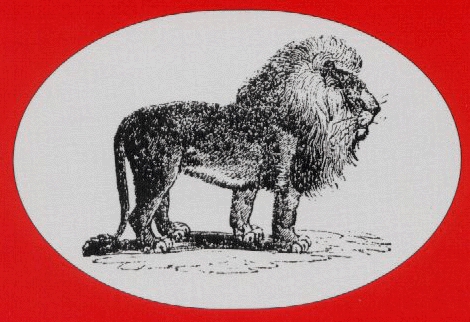 The London Missionary Society also established a mission for the San at Philippolis in the Transgariep in 1822. A random collection of Griquas and other clans were persuaded to acknowlege Adam Kok II as their leader in return for which they would be allowed officially to establish themselves in the Transgariep and would undertake to protect the mission at Philippolis against Korana raiders. Thus, the Philippolis Captaincy became a centre of Griqua authority. Its borders were, to the south the Orange River, to the west approximately the modern boundery line between the Free State and the Northern Cape, to the east near the modern Behulie and in the north the Riet River in the vicinity of the modern Reddersburg. 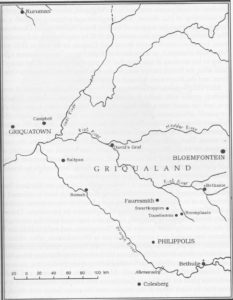 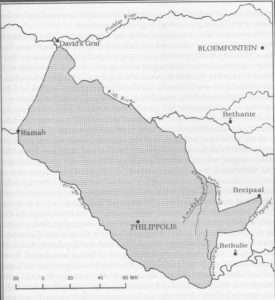 Map showing the unleasable area of the Philippolis Captaincy (shaded), as laid down in the Treaty of 1846

From 1825 white farmers from the Cape Colony were permitted by the colonial authorities to cross the northern frontier to seek temporary grazing across the Orange River. Very soon the white farmers start to undermine the Griqua authority and the situation was further exacerbated by the fact that a significant number of Griquas were willing to sell their farms to whites. In 1837, under Abraham Kok, and again in 1838, under Adam Kok III a number of treaties were signed with the Cape Colony that provided the Griquas with some measure of protection against white Colonial subjects in their territory.

In 1842 hostilities between Boers and Griquas broke out when Adam Kok attempted, per the treaty, to arrest a Boer living in his territory. This eventually led to the Colonial Government agreeing in 1861 that all the Griqua land in the Philippolis Capaincy be sold and incorporated into the Republic of the Orange Free State. During 1863-64 the majority of the Griquas undertook an epic trek across the Drakensberg to what was later called Griqualand East.

The present work comprises a collection of 162 official and semi-official documents relating to the Captaincy, which existed at Philippolis in the modern Free State from 1826 until 1861 when it was transferred to Kokstad in what is now Griqualand East. These records, which have been gathered from widely scattered sources and have, in many cases, never been published, give a comprehensive picture of a hitherto insufficiently documented aspect of the history of the Northern Frontier. They include the text of the original Griqua law code, and have been augmented with a brief survey of Griqua history, a chronology, and a detailed index. 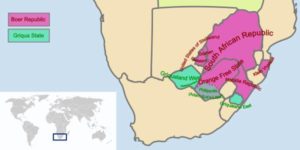 70. Adam Kok III to John Montagu: Answers to an official questionnaire (1845). Answers to questions proposed to the Chief Adam Kok, in a letter from the Colonial Secretary, April 18, 1845

“1st. The territory claimed by my people is bounded on the south and southwest by the Orange River; on the north and north-east by the Modder River; on the east by the country of Lepui; and on the west by that of Waterboer.

The tribes in my neighbourhood are those of Waterboer, Moroko, Moshesh and Lepui, all of whom are independent of me.1

No written agreement respecting boundary lines has been entered into with any neighbouring Chief except Waterboer,2 but I have no dispute respecting territory with any of the above mentioned Chiefs.

I know of no lands in my immediate neighbourhood unclaimed or unoccupied, and there is no tract of country which I occupy in common with any neighbouring Chief.

2nd. My subjects are not all of one tribe, and consist of Grikwas, Bechuanas and Bushmen. Of these the lastmentioned were the original possessors of the country, and the Bechuanas consist chiefly of such persons as sought refuge amongst us from the wars of the interior. Some are, however, the subjects of Moshesh, and are subject to my laws only as long as they reside in my country. There are also some Korannas living in my territory under a subordinate Chief named Piet Witvoet. None of the other tribes are under a subordinate Chief, but live immediately under my rule.

The people under my rule amount in number to about six thousand, of whom rather more than three thousand are Grikwas, and the remainder consists of the tribes mentioned above.

3rd. My people were formerly wholly a pastoral people, but they at present also cultivate the ground. They sow wheat, barley and other grain, and also plant vegetables and fruit trees; but I am not able to say to what amount. Last year many thousands of muids of wheat and barley were reaped by my people. We have also commenced the breeding of wool sheep.

Individual right of property is recognized by our laws, but no lands can be hired or sold among my own people without my consent, and it is contrary to our laws to sell land to any person not being a Grikwa subject.

I should not be able to alienate any portion of my territory without the consent of all my people, as such an act would require the change of one of our fundamental laws [….] “