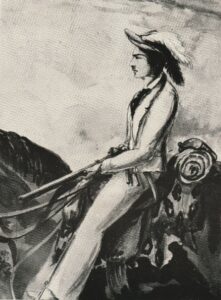 Thomas Baines was an English artist and explorer.  Born in England in 1820, Baines was apprenticed to a coach painter at an early age. At the age of 22, he left England for South Africa and arrived in Cape Town in 1848 where he worked for a while as a scenic and portrait artist and later in Grahamstown as the official war artist during the Eighth Frontier War. 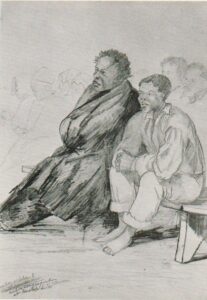 Thomas Baines is best known today for his detailed paintings and sketches which give a unique insight into colonial life in southern Africa. He is considered as one of South Africa’s most notable artists, describing many historical events, which he meticulously recorded both with brush and with pen. 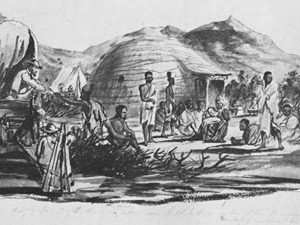 His diaries or journals, published here, were in his own words kept “mainly for the purpose of recalling to my mind the incidents necessary to be remembered in painting from the sketches”. He also made rough notes while travelling, to be written up at leisure, and then rewritten for publication in book form.

Baines was a very knowledgeable man, and very intelligent; he was also a man of imagination. He was, however, untutored. This is evident more in his writing than in his painting. His spelling was weak; his complete ignorance of syntax, combined with the absence of punctuation, often obscured his exact meaning. 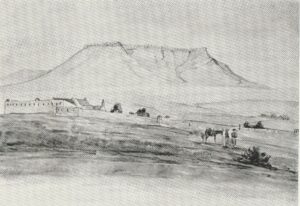 This volume covers many of his journeys in the eastern Cape, first with the expeditions of Mr W. F. Liddle and lateron his own.

Bained travelled with the Liddle Expedition from Grahamstown to Shiloh, the Moravian Mission Station and further north as far as Colesberg. On his own he visited King Williams Town, East London and Kaffraria.

“…..sympathize but little with my forlorn condition, and insisted upon a detail of my somewhat eccentric peregrinations, while, parched with thirst and half choked with dust, I was hardly able to ask him for a drop of water; and how long I should have waited for the cooling draught I know not, had not a female in the wagon expostulated with him on ‘the sin of withholding water from a thirsty person.

On reaching the highlands of Grass Ridge about eleven in the fore­noon, I saw a group of wagons outspanned by the roadside, and soon recognised them as those I sought. My dog, which had wisely chosen rather to stay by the flesh-pots than to accompany my wanderings, bounded forth to meet me, and Abram handed me a cake of coarse meal with which to beguile the time while he cooked the coffee kettle. He informed me that they had seen a tiger, or, rather a leopard or panther, near the wagons; and shortly after we had inspanned he pointed out a couple of ostriches swiftly skimming the horizon, and, when I awoke from a short sleep in the wagon, told me that four lions had just passed us. Thinking myself . . . . as, I believe, does every ‘fresh arrival’, in a land of savage beasts, I began to look to my fire-arms, when it was explained that the lions in question were per­fectly tame and were being carried to Algoa Bay on speculation.

About six the same evening we crossed the Sundays River, and, passing the comfortable-looking inn upon its western bank, entered the Addo bush, which Abram, determined if possible to make me imagine myself in a savage land, represented as the haunt of elephants, lions, and numberless other wild animals. A few of these creatures, I believe, do still inhabit its deepest recesses but they are rarely met with, and their spoor is only occasionally seen upon the road. About nine the oxen were allowed to lie down in the yokes, and, as I did not make coffee, Abram invited me to take tea with him, remarking, as he handed me the pannikin, that the water he had used was not dirty but only a little thickened by the trampling of the oxen.

After tea a discussion arose between him and Oom – Uncle – Jonas. January respecting the treatment of children, on which they appeared to speak with much kindness and good sense; the doctrines of predestina­tion and fatality were next argued, and, though their opinions seemed to differ, it was at length pretty generally agreed that a blind reliance upon fate ‘came rather from the Devil than the Lord’. Old Jonas, referring to my last night’s adventure in refutation of something advanced by Abram, said that while I was absent his heart was heavy for me, but that now I had returned and was safely sleeping with them it was again light. My own, I thought, must have been hard indeed had it not been touched with the kind feeling of the old man, expressed when he thought I was asleep, and in a language he did not know I partially understood.

[4 Mar.] On the morning of the next day I beheld for the first time a son of Amakosa, followed by his wife, who bore upon her head his scanty travelling equipment and what appeared to me the shafts of his assagais, the blades being probably concealed in the bundle; and could not help contrasting rather unfavourably the ragged garments of my friends with his picturesque costume and proud bearing, rather incon­sistent, by the way, with the accounts I had heard of the thoroughly subdued and humbled Kafir; and regretting that so fine a subject for the pencil should ever be rendered less inviting to the artist by the march of civilisation. We crossed the Bushman’s River before sunset and about eleven halted on a hill, near a long-deserted Kafir kraal; the oxen were again made fast to the yokes, the general opinion being that wolves were too plentiful to allow of their being turned loose; and, in answer to a question respecting the time they intended to start in the morning, I was informed that they never travelled on a Sunday, but were glad to see that I had a watch with me, as they would now be enabled to know exactly when the sabbath was ended, and delay no longer than was absolutely their duty.

[5 Mar.] The night was cold and damp, and in the morning the clus­tering dewdrops trembling on every spray and blade of herbage glit­tered in the light of the rising sun, reflecting to the eye of the spectator the prismatic colours and all their brilliancy, and reminding me more forcibly of my home than anything I had yet seen in Africa. Light mists were rising from the valleys, and the course of the Bushman’s River might be traced for many miles by the vapour which filled almost to overflowing the space between the hills on either side; on the other side [of] the road was a vlei or small pool, in the clear bright surface of which the overhanging trees were mirrored; alas, that its purity should be only superficial, but it seemed to me too true a picture of life and not less perhaps of travel in South Africa. Nevertheless, the coffee tasted well, and, as mud has little or no perceptible flavour, the transparency of the fluid is perhaps after all a matter of slight importance. In the afternoon a detachment of artillery arrived from Graham’s Town and encamped around the vlei, their white tents and wagons and piled arms forming, in conjunction with the dark foliage, as pretty a bit of scenery as could well be desired.

Shortly after I had wrapped my kaross around me for the night, the Bechuana gathered round the fire and, having sung a hymn, listened to a prayer of considerable length, apparently a form with extempore additions repeated by one of them with a solemn earnestness that made me ashamed of my own cold and faint-hearted devotions and of the comparison I had drawn the day before between them and the Kafir. If they had lost the picturesque wildness of the savage state, here was at…..”

Edited, with Introduction, Notes and Map by R. F. Kennedy