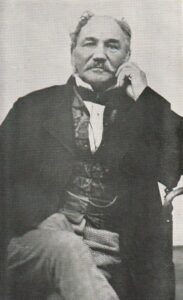 Bain was born in Scotland and raised by an aunt who lived near Edinburgh. Here he received a classical education, but no vocational training. In 1816 he emigrated to Cape Town accompanied by his uncle Lieutenant Colonel William Geddes who was stationed in the Cape. In 1818, at the age of twenty-one he was married to Maria Elizabeth von Backstrom in the Grootte Kerk in Cape Town. In 1822 he bought property in Graaff Reinet and carried on for some years the business of a saddler. The couple had ten children and living in Graaf Reinet the older children had the advantage of attending school conducted by the young Mr Rose-Innes who later became the head of the Education Department of the Cape Colony. 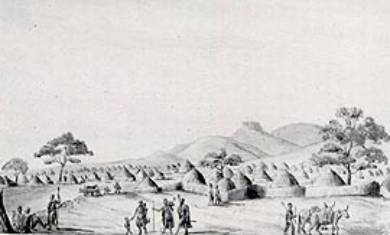 View of Kuruman, 1825 (From a copy made by Arthur Elliot of a tinted sketch drawn by Bain during his first visit.)

It is also evident that he involved himself in public affairs. He worked to the benefit of the local population of Graaff-Reinet by undertaking the job as chief manager to build a pass up the Oudeberg in 1832 although he had no surveying or engineering training. All expenses of this venture were covered by prominant individuals in the town and district. During the sixth Frontior War 1834-5 he displayed engineering talents which gave rise to permanent employment as surveyor of military roads under the Corps of Royal Engineers in 1836 living in Grahamstown. From there his engineering career blossemed and he was appointed as Enigineering Inspector by the Cape Roads Board in 1845. Under his leadership many mountain passes were constructed of witch Michells Pass in 1848 and Bain’s Kloof Pass in 1853 are but a few.  Devoting his spare time to geological studies, Bain prepared in 1852 the first comprehensive geological map of South Africa, a work of great merit, which was published by the Geological Society of London in 1856. 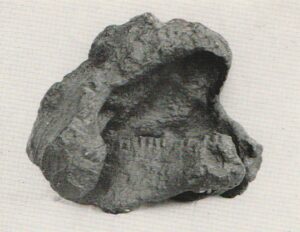 Apart from being famous as a road builder Bain was also known for his geological work which received international recognition.  We will also be remembered for his outspoken personality and sense of humour. While resident in Grahamstown he wrote some satirical sketches for local amateur dramatic entertainment and invented the character Kaatje Kekkelbek who endeared herself forever to South Africans, and held John Philip and other missionaries up to ridicule. Kaatje, the Hottentot girl, uses Hottentot-Afrikaans in the spoken parts, and sings in Afrikaans-English. She comes on stage playing a Jew’s-harp:

I come from Kat Rivier,

But scarce of wine and beer.

Myn A B C at Philip’s school

I learnt a kleine beetje,

But left it just as great a fool

The period covered in the life of Andrew Geddes Bain in this volume spans from 1816 to 1864. Since the second British occupation of the Cape of Good Hope in 1814 and more specifically after the Napoleonic Wars, much emigration from Britain followed. The Cape Colony was fortunate in attracting many men, pioneer traders, scientists including botanists, geologists and engineers, enterprising farmers and men who later played an important role in the civil service. Bain himself could be included in all the foregoing categories, for as trader, explorer, soldier, road engineer and geologist he played a pioneer and valuable part in the development of South Africa. 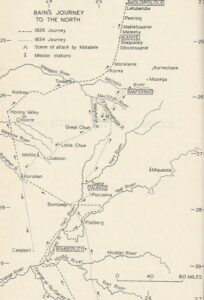 In 1825 Bain was the first to take out a Licence to trade across the Orange River and later into Bechuanaland (today’s Botswana). To procure ivory was object of most of these trading ventures. During these journeys he discovered his talent for drawing and writing and became a regular correspondent for John Fairbairn’s South African Commercial Advertiser. Bain, who was a keen observer, a good writer and draughtsman, and endowed with a keen sense of humour, wrote accounts of events in Graaff-Reinet signing them “an intelligent correspondent at Graaff-Reinet”. Outspoken, he was sued for libel a number of times. 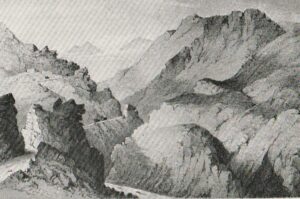 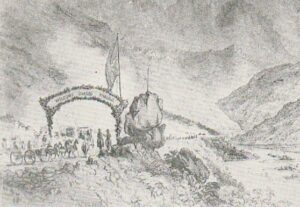 The Opening of Michell’s Pass by the Governor, Sir Harry Smith

In 1854 Andrew Geddes Bain’s son Thomas succeeded him as Inspector of Roads for the Western Cape and he was transferred to the Eastern Cape. There was endless work ahead and the Government in the next few years made full use of his services. In 1860, when he was 63 years of age, Bain started the survey and construction of the Katberg Pass between Fort Beaufort and Queenstown. Before the work on this pass was completed Bain was forced by ill health to take long leave which he decided to spend in England. When he arrived back in Cape Town he was too ill to travel home to the Katberg. He died in Cape Town, following a heart attack, on 20 October 1864. 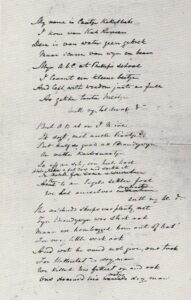 “He then ordered two large wooden dishes to be brought which were inverted and given to us for seats that we might sit down by him. Then, asking us if we would eat anything, we said we would take a little milk which was brought us directly in a large well scoured wooden dish. His brother Kooa tasted it, according to custom, & then presented it to us.

His conversation commenced by asking us if many impediments had not been thrown in our way to visit him by his neighbours, the Bachapins & Baralongs, as he said he knew that they represented the Bawanketsie to be a very savage race. We owned they had tried many plans to dissuade us from coming, but we did not listen to their tales as Mr. Moffat had told us they were extremely hospitable, which account agreed exactly with the reception he had given us, for not one of the others had given us a drop of milk without getting tobacco for it. At this he laughed heartily & said he regretted he could not receive us better, for as he had been so buffeted about by the Mantatees he had now nothing comfortable about him.

He seemed surprised when we told him we had been more than three moons on our journey to him, that people could go so far from home. When his cattle came out of the Kraal we expressed our surprise at the great number of fine oxen he had & that we had never seen such large herds at one place before. He said, “I have now no cattle, (meaning comparatively), the Mantatees are fattening on my flocks & herds. When Makaba, my father, lived (continued he) then the Bawanketsies were rich, but now we are poor beggars without a single town to settle in.” He then presented us with a fine large ox that we might not starve (as he expressed it) In his dominions, & sent some men down with it to the waggons to kill it for us.

The Bawanketsie oxen are remarkable for the amazing size of their horns, being doubtless the largest in the world, tho’ the bodies do not exceed the common size of the Colonial oxen. Many of them have long loose horns hanging under their necks which has a very singular appearance. His flocks of sheep were very small compared to his oxen; many of their tails were much longer, tho’ I do not think heavier than those of the Colonial breed.

He now asked us if we would visit his wives & desired his brother Kooa to lead us to their huts. They were women of middle age, well loaded with beads & rings which seems to be all their minds are set upon. Each had a separate hut, merely a temporary dwelling, surrounded by a screen after the Bechuana manner, in the midst of which we found the ladies squatted attended by their domestics. After visiting his 3 queens, which was all he had in this place tho’ I believe he has altogether 16, we returned to Sibigho & he accompanied us to our waggons where an immense concourse of people was collected.

I fired a pistol by way of salute & to let them see the use of fire arms, but so terrified were they that they all fell flat on their faces & did not look up for some time. One poor woman swoon’d away, in which situation she lay nearly a quarter of an hour & was at last revived by a person blowing snuff up her nostrils.

Sibigho now presented us with an elephant’s tooth of at least 90 lbs. weight & in return we gave him some of our best beads & trinkets. We could scarcely think that all this kindness was from disinterested motives, as we soon found it was but a preamble to the Mantatee attack. We waived the conversation … “