Lawrence Richardson (c.1869–1953), a member of the Society of Friends (Quakers), was involved in two fact-finding and humanitarian missions to South Africa in the wake of the South African War. His meticulous diaries detail his interviews and draw a perceptive picture of a society devastated by war.

The Society of Friends strongly disapproved of war as an arbiter between nations and conceived it their duty to bring unobtrusive relief to sufferers, irrespective of their country, race, or creed. In September 1899, the Society was one of several bodies that urged the British government to avoid a conflict, through peaceful negotiation.

In its beginnings and prolongation, the Anglo-Boer War imposed severe tests on the British Quakers. Opinions of members were divided, as the general population was inclined to identify them as “pro-Boer”. When farm-burning and the concentration camp policies of the military in South Africa became known, the Society was outspoken in its rebukes of excesses and want of sympathy for human distress. The society itself moved into relief work in December 1899 when it appointed a Friends’ South African Relief Fund Committee. After his return to England at the end of 1902, Richardson kept in close contact with the situation in South Africa. In September 1903, he was asked to go to South Africa again to join James Butler, a South African Quaker who was editor of the Midlands News in Cradock, on a second journey of investigation. Richardson resumed his journal after an interval of nine months. During his travels in the Orange River Colony and Transvaal, Butler wrote to his family, providing a parallel version of part of their journey. A brief account of the second mission, including the places visited, can be found in the joint report of Butler and Richardson as an annexure in this volume.

At the end of the war the Relief Committee remained anxious about Boer destitution for it realised that the concentration camps would have to remain in being for some time. It was not clear how much assistance the crown colony administration would provide. As a volunteer Richardson, together with the secretary of the Relief Committee, William Alexander, joined the first fact-finding mission to South Africa in 1902. He kept summaries of his interviews in journals and these journal entries provided the nucleus of periodic letters to England. 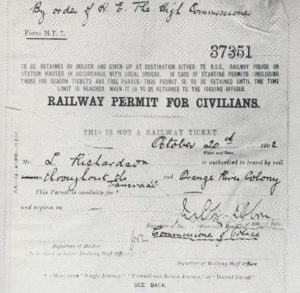 Richardson’s papers have particular significance. Moreover, the painstaking verification of his information and an insistence on the qualification of general statements, make him a highly credible source. John Wilhelm Rowntree, a respected senior member of the Quakers in England, wrote to Richardson in 1903 and said: “I think the letters you have written are remarkable for their care, balanced judgement and thoroughness. They will be very valuable to the historian.”

On Wednesday afternoon [22 October] we had half an hour’s talk with Lord Milner at his office in Johannesburg. We were rather nervous before­hand but he is a man who put one at ease at once. He talked very freely about the repatriation work and the prospects of the country. We were able to lay before him some of the complaints and misunderstandings we had come across and he seemed glad to know of them….

As a result of this interview we got a letter to the manager of the rail­ways asking him to give us a free pass over the Transvaal and O.R.C. railways; the manager said Lord Milner’s wish was law to him and gave us pas­ses at once.

Also we got an introduction to the private secretary of Sir Arthur Lawley deputy-governor of the Transvaal, which led to an interview with Mr Duncan, the treasurer of the Transvaal who is head of the repatriation work in this colony and gave us full information as to how the work is managed. Also we have a letter from Sir Arthur Lawley asking magistrates and camp superintendents to give us full facilities for seeing things.

I am extremely glad to have thus got on the right side of the officials and be able to go about freely. If we can for the time forget politics, as we endeavour to do, I hope we shall be able to keep on good terms with the officials and with the Dutch as well. There is no doubt that the officials are doing their best towards the rebuilding of the country and are doing a very great deal indeed. Nevertheless the work of repatriation is so gigantic that it is not to be wondered at if hitches and breakdowns occur.

The country has been swept bare, hardly a house has its roof left, away from the railways, and most of the stock has been destroyed. Reliable authority [Howard Pim] estimates that the Boers have lost 5/6 of their property or £25 000 000 value.

The railways are unable to bring all the stores that are wanted and are seriously in arrears. The cattle transport is a still more serious question; it is estimated that only 100 000 cattle are left in the O.R.C. and 50 000 in the Transvaal; and these are in such poor condition that a trek to an out-lying district may take a fortnight where it ought to take a week. Ploughing only be done by lending animals round from one farm to another.

All sorts of dangers are ahead – rinderpest, horse sickness and other diseases; failure of the mealie crop from too little rain or impassable roads from too much rain.

Nevertheless the work of repatriation is going forward and over half the people have gone back to their farms. Those that are left in camp still are mostly bywoners … and the widows; these will be the most difficult question and there is a great danger lest a pauper class should be formed – and S. Africa has as yet no poorhouses.

In going out of the camps the people are allowed to take away their tent, bedstead, cooking utensils etc. A memo. is kept of these but we understand they will not be charged for them. They are also given a month’s rations free. A waggon and oxen are lent just to take them home. What else they may need — ploughs, seeds, cattle for their own use, further supplies of food, building materials etc. — these are supplied by the Repatriation Board for the district, a strict account of everything they get being kept. On1y what we should consider the very barest necessities are supplied thus; they will live in the tent while getting the ground ploughed and sown and then set to work to repair the house with sundried bricks (a good material) and corrugated iron. They manage to make a start, where English people wou1d starve helplessly; on the other hand we hear that in Johannesburg the Boer is helpless at finding work compared with the Englishman — they are accustomed to a very different life.

The payment of compensation is a separate matter. For receipts given by the British army, the military are responsible and these are paid in full; we have not heard much about these military receipts, but I don’t think they amount to much.

P.S. I learn that the military have paid out the bulk of their claims amounting to £600 000. Reasonable proof of goods taken is accepted as well as actual receipts.

Edited by Arthur Davey
For many years a Council member of the Van Riebeeck Society, Arthur Davey had published extensively on the South African war, including a study of the British Pro-Boers.