This is the first part of the first volume of “Beschreibung des Vorgebirges der Guten Hoffnung” (Chapters I-IX) published by O.F. Mentzel in 1785.

“A complete and authentic geographical and topographical description of the famous and (all things considered) remarkable African Cape of Good Hope” by O.F Mentzel published 1785

Otto Frederick Mentzel, the son of a medical doctor, was born in Berlin in 1710. He was well educated and as a young man served in the army of the King of Prussia. He came to the Cape as a soldier, although his education was above that of the average common soldier who enlisted in the Dutch East India Company. We do not know the reasons why, nor the circumstances under which, Mentzel entered the Company’s service. Perhaps the glamour of the East fascinated him.

He arrived in the Cape in 1732 or 1733 and when he first met Captain Allemann, Commander of the Military Forces, he tells his readers, he was very hard up. Allemann patronised him almost from the start, as soon as he had heard that this humble soldier was a fellow Prussian. Very soon Mentzel became the tutor of Allemann’s children. Mentzel had the proper disposition for making friends; he was courteous and obliging, and, judging from the many stories and anecdotes in his writings, he must have been an entertaining conversationalist. Mentzel left the Cape unintentionally at the beginning of January 1741. He boarded a ship that was anchored in Table Bay to deliver letters to be posted in Holland for his family and friends in Germany. Due to a misunderstanding he could not get back to shore before the ship lifted anchor and was on its way to Europe. Mentzel never came back to the Cape after this unplanned departure. 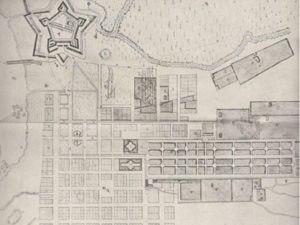 What is surprising is that Mentzel did not publish any of his impressions of the Cape until forty years after his departure, when he was more than 70 years old.

This publication, being the first of three volumes published by the Society, contains an historical background, a description of the physical features of the Cape and accounts of the administration and finances of the colony. He described briefly, yet thoroughly, clearly and truthfully the boundaries, internal and external conditions, constitution, form of government, judicial and police systems, military organisation and provisions for defence, revenue, trade, local privileges, urban and rural industries, occupations, customs, habits and mode of life of the Christian as well as of the heathen inhabitants, each in its proper order.

In describing conditions at the Cape as he found them in the mid-18th century, Mentzel intended to correct the errors perpetrated by such earlier travellers as Kolbe.

142 Description of the Cape

[…] a month, but nothing else so far as I know. When he passes, the guard falls into line and orders arms, while other sentries present arms. At the approach of the three upper-merchants the sentry on duty would call out “Guardsmen! “ There­upon the merchants would, generally, give a sign to the sentry and the men would group themselves in single file under the gate and take their hats off.

Among the ordinary members of the Council of Policy are the four merchants.

The first is the director of the bureau, in which all correspondence is conducted with Holland, Batavia and Ceylon. It is the business of this office to issue official notices, letters patent governing promotions, and, in short, to deal with all matters that do not fall within the scope of the Offices of Justice, Trade or Pay. This official receives a monthly salary of f6o, a kostgeld allowance of 24 R. monthly, making an annual emolument of f720 and 288 R. He has besides a considerable share in the usual perquisites that appertain to the legal business of his office; it must be noted, however, that he is the most hard-worked member of the Council of Policy.

The second merchant is styled the Dispensir. He superintends the provisioning of the garrison, the ships’ crews, the hospitals, the slaves, and the Governor’s table. He has charge over the grain-store, the bakery and the mill. Assisted by a Bottelier* he accepts the delivery and checks the quan­tities of all produce sent in by the farmers, and certifies the consignment notes ; the Governor then issues an order for payment, which is duly honoured by the Pay Office. The authority of the Dispensir extends to all transactions arising from provisions belonging to the Company, such as the victualling of ships, the distribution of rations, and the sale of surplus products. Among the provisions would be included such items as corned-beef, bacon, rice, butter, cheese, olive oil, etc. His salary and kostgeld is the same as that of the first merchant, namely, f720 and 288 R. annually. He is allowed to deduct a certain percentage from the quantities of goods stored to cover depredations of rats or loss of weight by evaporation; any difference in his favour is his lawful perquisite.

The third merchant was in charge of the warehouse and was therefore styled the warehouse-master. Merchandise of all sorts was stored there, such as groceries, iron, steel, copper, brass, lead and tinware ; writing materials, books (namely, bibles and prayer books), tools, tobacco and pipes, and generally everything useful for production and manufacture. Although the designation of merchant given to this official was an honorary distinction, yet he might properly be regarded as a merchant, seeing that he sold on behalf of the Company such articles as above-named and also bought such commo­dities as ivory, etc. The vintage of Constantia, Rondeboscb. and other presses was stored directly on board the ships, or in the Company’s cellars. He received the identical salary and kostgeld as the other merchants, namely, f720 and 288 R. annually.

The fourth merchant is called the shop-keeper. He sells wholesale, by the piece, East Indian cotton goods such as chintz, calico, “salemporis,” gingham,“ geraas,” “bastas,” “hanegatjes,” as well as quilts and counterpanes lined with cotton wool and cotton yarns. This storekeeper shares with the garrison book-keeper the duty of paying out half-yearly the wages and salaries due to the servants of the Company— civil, naval and military. Payment is made at the end of February and at the end of August; all books are balanced on the 31st August. All stores and magazines are then closed for business for a period of fourteen days; stocks are taken and the figures are transferred to new account books. To prevent any errors from creeping into the pay-books a general muster is held throughout the Indies at the end of July or at the beginning of August; the names of all persons in the service of the East India Company, from the highest to the lowest, are called over, and each has to answer either in person or through his superior. During this muster the whole garrison is under arms: the officers acknowledge the call by saluting with their spontoons, the drummers by a sharp roll on the drum. The emoluments of this officer too are the same as the foregoing, namely, f720 and 288 R annually. Each of these merchants is allowed, monthly, two loads of fire-wood, but no other perquisite saving the labour of one free-worker, who is generally a tailor by trade. When the merchants are about with sword and staff they are saluted by the sentries, but not on other occasions.