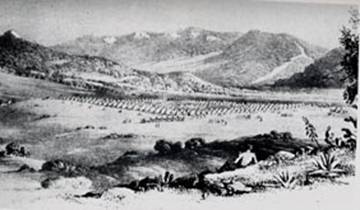 The Cape Monthly Magazine was the best-known of the 19th century Cape journals. Edited by Professor Roderick Noble of the South African College, and Alfred Whaley Cole, it attracted contributions from leading Cape intellectuals. This selection deals with travels and historical reminiscences and includes articles by Dr W.G. Atherstone, Charles Brownlee and Robert Godlonton 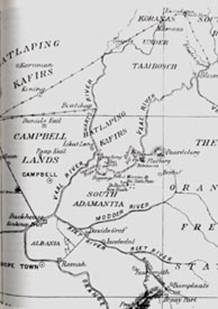 Part of a map of the Diamond Fields

mountains, and below us lay the Fish River bush, spreading far as the eye could reach to the right; whilst on our left — unseen from the distance —lay the grassy slopes of Glen Lynden, Glen Pringle, and the “haughs” of the meandering Koonap, and the Amankazana or ‘River of Girls” scenes rendered classic by Pringle — not unto Boers, bless their unpoetical souls! they never heard of him or his poesy; but our Scotch friend knew Pringle by heart, and the places had only to be pointed out, which her travelling companion did to perfection, for she seemed to know everything and every place, and its whole historical associations, when the ready quo­tation would fit in as aptly as if dovetailed into the panorama by the poet himself! I sat listening silently, in a soft, delicious reverie, drinking in the balmy air and the dreamy visions of poesy raised by these prattling en­thusiasts, just putting a word in now and then to show I was still awake. Crossing the belt of blue trap-rock, with its pebbles of granite and quartzite and gneiss, that woke me up thoroughly, we entered the Ecka Pass, scraped round the steep wooded hills clothed with evergreens, aloes, euphorbias, and the brilliant strelitzias and crassulas peeping out by the roadside. The slates here seem whitened and scorched, and baked into hones by the trap rock, and twisted and tilted up bodily with the strata above them, all dip­ping northwards up to the Diamond-fields. But, what’s up now? — the ex­press cart stops suddenly. “Adam — his spoor!” grins the driver; “see, he wore veldschoens; dit staat niet in de Bijbel !“ “Footprints of primitive man! Bless me! how very interesting,” gasped out the intelligent stranger. “I’d no idea you’d got such things here in South Africa! Why, you might almost find out Adam’s stature from the size of that foot if you sent it to Owen or Huxley! Veldschoens mean sandals, I suppose. Did the Patriarchs wear sandals? I must look up the passage. But what a strange rock it is! That blue hard rock was soft mud, I presume, when those footsteps were printed there, and those large rounded boulders and waterworn pebbles imbedded in it must be evidence of the Flood?” “Well, madam,” said I, slowly, solemnly, musing thoughtfully, “if those footprints are Adam’s, of course we could measure his height from their size, and IF that boulder formation is the ‘boulder clay’ of Natal, which savants there say is a glacial drift, and if the groovings and markings they find in it are really the mark­ings of glaciers and the spoor of pre-Adamite icebergs, I think we may legi­timately infer the approximate date of Adam’s presence on earth; but the fact is, those are merely two waterworn pebbles lying imbedded side by side in the hard rock, worn away by atmospheric effects till they’ve assumed the exact appearance of footsteps of some giant.” So the whole interesting theory topples down in a moment; Adam vanishes with his veldschoens, the icebergs melt and disappear with the glaciers and grooves, and we rub our eyes and wonder — I know you do, dear reader — what we’ve been dreaming about, and if it’s at all probable that we shall ever get to the Diamond-fields at this rate of travelling. We passed two “primitive men in the road soon after, draped in Nature’s undress uniform — red clay, glossy with grease, and a smothered laugh put a stop to all further antiqua­rian discussion. At the Koonap the post overtook us with four men pas­sengers, and we all were transferred to a light spring wagonette with six prancing horses that snorted and tossed their proud heads as saucily as if they felt and would tell us, “We’re off to the Diamond-fields too.” What a merry hilarious crew it was — German and English, Colonial and Scotch —and what racy diamond stories and jokes and wonderful anecdotes, keeping all in a roar of laughter: you’d have fancied Mark Twain had got in amongst them by mistake, and contaged the whole lot. We reached Fort Beaufort at night, and got off before daybreak, when we found, to our horror, that the ladies had left us — skedaddled under cover of night, and no one was rude enough to ask the young lady’s name or address!

Dawn greeted us with its wild scarlet streamers — ominous signals of storm — that vanished even as we gazed on them, melting away in the fra­grant air with the straggling mists of the mountain as the sun leapt down on us, bounding away, full of life, through the beautiful Blinkwater valley.

Long grassy bottoms are crossed, frosted and sparkling with icicles, with their parklike clumps of evergreens and groves of scattered acacias of brightest hue, and Ainslie’s mill with its sheltering trees and noisy rivulet working and murmuring out of sight. The wooded heights of Fort Fordyce and the sunlit peaks of the Tyumie call up memories and scenes that would, once on a time, have sent a cold shudder through the eager listener. But