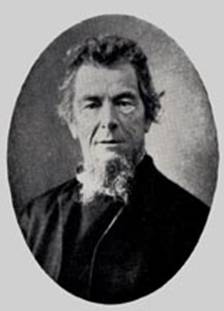 Archdeacon Merriman was appointed Archdeacon of Grahamstown by Bishop Robert Gray in 1848. His instructions were to expand the church in the Eastern Cape by establishing new congregations and building churches in the small townships. He was to ‘awaken religious instincts long dormant through lack of opportunity’ and to ‘preach to barbarous people the saving grace of Christianity.’ In accomplishing these goals he travelled widely throughout the Eastern Frontier regions of the Cape Colony, commenting on Dutch and British settlers and meeting many of the Xhosa leaders. 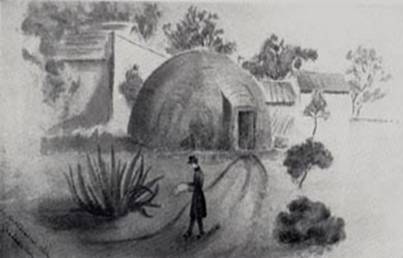 and this is their usual custom. In fact the Methodists have no Sunday School there of their own—why should they? We are doing their work, and I had to give tickets of attendance to their children (the Wesleyan teacher’s own son among the number) for which at certain seasons they receive books as rewards.

After this I was less astonished that the reading the Athanasian Creed in the Service on Whitsunday and Trinity Sunday should seem a startling novelty to the congregation, and that the clerk should be unable to find the place on the first Sunday until it was half concluded. The principal man resident at Bathurst who goes to church, though not professing himself a churchman, is confessedly unsound in the Doctrine of the Trinity.

On Thursday 7th June 1 left home on foot accompanied by a Kaffir man (Wilhelm Goliat) to make a visitation of the Winterberg, Mancazana Post, the Moravian Missionary Station of Shiloh, and return to the opening of Fort Beaufort Church.

As Wilhelm could understand but little English, and I still less of Kaffir, our prospect of communication with each other did not appear to be great. However he knew Dutch well, and between the three tongues we contrived to make ourselves intelligible to each other, using sometimes a third person as interpreter between us. But Wilhelm’s desire of learning English was so great that we ended by usually conversing in that tongue.

Our first day’s march was wet and disagreeable, leaving Graham’s Town at 3 o’clock and reaching Fort Brown 2 hours after sunset. The next day we walked to Fort Beaufort where I was kindly enter­tained by an officer of the Cape Mounted Rifles who overtook us on the road and offered me hospitality. The following evening (Saturday) we reached Post Retief, an abandoned military post on the Winterberg, the buildings of which are now occupied by Rev. J. Willson, who has the special charge of the district, Wilhelm knocked up and very footsore, I pretty brisk and vigorous.

On Sunday I officiated and administered the Holy Communion to about 7 persons in the little school room, just below the Didima berg, and to my very great joy my Kaffir attendant, into whose heart I had by this time wound myself, presented himself among the communicants, bringing at the same time his certificate or quarterly ticket from the Wesleyan community of which he is a member. As this is to the best of my belief the first Kaffir that has ever communicated with the English Church, which he did unsolicited and uninvited by me (I had simply informed him on the road that I was going to the Winterberg to celebrate the communion and was carrying the vessels over my shoulder, as he was carrying my few clothes), I could not but call to mind the Bishop’s words to me at Protea, viz, that there seemed to be a special grace attending the first celebration of the sacraments in any place. This was the first time I believe that the sacrament of the Lord’s Supper had ever been celebrated on that mountain. Sincerely do I trust that this first fruits of that interesting people may be the earnest of an abundant harvest of them in our communion hereafter. Though if it be so we shall have cause to say of them, as must be said in this instance, “other men have laboured, and we have entered into their labours

This single circumstance I thought abundantly rewarded my going on foot instead of on horseback. For I should never, unless by walking, have had sufficient communication with Wilhelm to win his confidence. Nor should I have had the opportunity which I enjoyed of going and sitting for an hour occasionally in the Kaffir kraals, getting friends at least with the little children and women, drinking their sour milk (which it is useful to learn to like) and very generally concluding by reading to them a Psalm from the Book of Psalms in their own tongue, to which they invariably listened with very devout attention. Nor could I, except by walking, have stopped to pluck and admire the very beautiful flowers with which the bush is at this time full, as well as the splendid bulbs for which the Winter-berg is famous, many of which were still in bloom.

On Monday 11 th [June] we had a meeting of the inhabitants of the Winterberg to consult about the difficulties in which they were involved by the debt which still stood against them for the unfinished buildings begun some four years ago by Mr Boon. After much discussion I persuaded them to make a vigorous effort to raise the funds and satisfy all claims against the end of September when I promised to visit them again; well knowing that they would raise nothing towards a clergyman’s stipend or for any other church purpose while this burden hung on them and afforded them a con­stant theme for grumbling against Mr Boon, whose zeal had certainly seemed in this matter to have outrun his discretion.

The day following I set out in company with Mr Wilson for Shiloh. We rode the first part of the way, breakfasting at the farm house of Mr Smith whose son accompanied us to the top of the hill behind their house, and pointed out the direction we were to take