The Diary of Dr Andrew Smith, director of the ‘Expedition for exploring Central Africa’, 1834-6; Vol. I

The Diary of Dr Andrew Smith, director of the ‘Expedition for exploring Central Africa’, 1834-6; Vol. I 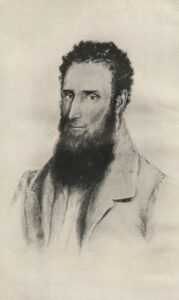 Dr Andrew Smith during the Expedition (Sketch by Charles Bell)

On several occasions he was sent by governors on missions to visit indigenous tribes beyond the frontier. During these missions was able to indulge in his interests of natural history and anthropology.

In 1833 the reports of traders from North of the Orange River led to an 18-month-long expedition by Andrew Smith to Basutoland, Kuruman, the headquarters of Mzilikazi (the chief of the Ndebele) and as far north as the Magaliesberg. Amongst others he was accompanied by Charles Bell as the expedition artist. Smith returned with two of Mzilikazi’s advisors who forged an alliance with the Cape Colony on behalf of their chief. Smith’s “Report of the expedition for exploring Central Africa” was published in 1836. Except for two short reports that appeared after his return to Cape Town from the interior in 1836, no detailed account of his travels was ever published. 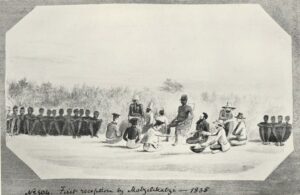 First Reception of Smith by Mzilihazi (Sketch by Charles Bell)

The Diary of Smith, kept during the “Expedition for Exploring Central Africa”, was discovered in the South African Museum in Cape Town in the late 1930’s and was edited by Percival R Kirby and published by the VRS in two volumes, Vol I-20 in 1939 and Vol I-21 in 1940. The first volume covers Smith’s travels to today’s Basutoland, where he visited Moshesh, the well-known chief of the Basutos at his stronghold, Thaba Bosiu. From there he travelled up to Kuruman, where he was welcomed by Dr. Robert Moffat who joined him exploring the Ndebele country. As mentioned above, he visted Mzilikazi and he explored the Oori, Mariqua and Limpopo Rivers. 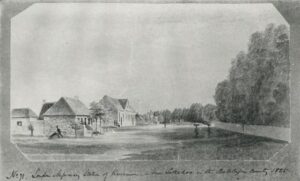 The first volume takes the journey up to 9 May 1835 before they started travelling further north.

“Abram Kok, one of the chief’s sons, lives near where we halted, He has a mat house and no furniture. His wife [was] dressed in leather and his face [was] painted red to protect it against the sun and wind. [He] has a little land under cultivation. Several other spots of cultivated land observable from the road. The place where we halted is called Bank Fonteyn, and belongs to Adam Kok. Here is a small river which runs during the rainy season; also a little land under cultivation which requires to be irrigated, and for that purpose a dam has been formed above the land. A person living here in the capacity of a servant asked 8 Rds. for a small year old calf and would take nothing less. They evince but little desire to part with their property, and they appear to fancy that we must take what they offer and at any price they choose to fix. In this respect they approximate to the Colonial farmers. Everywhere complaints about the Boers, and about losses they sustain by having the grass eaten off by their cattle. The complaint appears just, as everywhere immense flocks and herds are to be seen feeding over the entire country in this direction, and even the farmers are actually residing close to the houses of the Bastards, and threatening them, if they do [not] rest quietly, that the circumstance will be reported to Government. The places will then be taken and measured out to the colonists. The Bastards in consequence of these observations appear very miserable, and will neither sow nor build, if their own statements are to be credited, lest they should by a step of Government might lose both labour and property. Their minds ought to be set at rest on this subject.

About 2 o’clock left Bank Fonteyn, and about ½ past six reached Bosch Spruit, the property of a Bastard from the Roggeveldt. He purchased this property from Hendrick Hendricks for 100 Rds. It is well supplied with water, having close to the house in the channel of the stream four or five very large deep holes. The water, however, is so low at present that it cannot with the means he possesses be led out. By means of a pump a sufficiency would be obtained to irrigate a very considerable portion of land. He complains of being very poor, having only about 200 goats. Several persons reside in the place with him, who have come there in consequence of the drought in other directions. On the flats, but especially on the hills, an abundance of dry grass. Close to him are farmers residing with their flocks, and actually the cattle of those individuals may be seen feeding almost upon the very precincts of the house. Wherever the eye can be turned nothing but flocks of sheep and herds of cattle are to be seen together, with here and there a wagon or two, the temporary abodes of the farmers.

Bastards acknowledge one serious incon­venience which is experienced on this side of the Colonial boundary, namely the non-existence of firm and just laws. They speak of the great proportion of inhabitants being in one family and of the chief not being inclined to go against his own relatives.”

Edited by Percival R. Kirby
The musicologist, Percival Kirby, discovered the diary in the South African Museum where it had remained, unknown, since 1913.