The Reverend Francis Owen was sent to Zululand in 1837 by the Church Missionary Society in London to open a mission at the kraal of the Zulu King Dingane [Dingaan]. Prior to 1837, the American Board Missionary Society from New England planned to establish a mission station at the Royal Kraal, Mgungundlovu. Dingane did not allow them to build so near to his kraal but relegated them to a location four days away by ox wagon. Owen and his household were permitted to occupy a hillside above the kraal and a cordial relationship between the missionary and the king developed. Dingane was more interested in persuading the reluctant missionary to teach him about musketry rather than religion.

The spread of Western colonisation was closing in on the King of the Zulus. English traders had settled at Port Natal during the reign of his predecessor, King Shaka, and missionaries had entered his kingdom soon afterwards. Their numbers were small, however, and they posed no direct threat. In 1837, the Voortrekkers arrived in Natal and attempted to ascertain whether they could occupy the empty land South of the Tugela River. Their leader Piet Retief visited Dingane and gained the impression that Dingane was willing to negotiate subject to Retief recovering cattle that were stolen from the Zulus by Sekonyela who lived west of the Drakensberg. Retief returned to Mgungundlovu in February 1838 accompanied by about seventy of his men and thirty servants with his aim to finalise negotiations with the king of the Zulus. On 4 February a deed of transfer of land was signed by the two leaders. 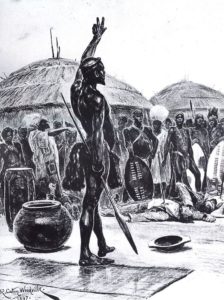 On 6 February the Reverend Francis Owen was informed by a messenger from Dingane that he intended to kill the Retief-party but that the missionaries will come to no harm. Before Owen could warn Retief, he and his household witnessed the events from a distance. He described what he saw and felt that same day in his dairy, being the only white witness of the massacre.

This publication consists of Owen’s dairy that was sent in instalments to the headquarters of the Church Missionary Society in London. It starts on 2 March 1837 when he and his wife and sister arrived in Table Bay and ends in November 1854 when they sailed from Cape Town back to their home country. They settled at Dingane’s kraal in October 1837 to establish his mission station and remained there until 11 February 1838 when they moved to Port Natal (today’s Durban). His contact with Dingane continued while in Port Natal until he left in May 1839. Without any doubt Owen wrote one of the best-known descriptions of life in Dingane’s kraal.

After he left Port Natal, Owen remained in South Africa until 1854 while continuing to do work for his missionary society in other parts of South Africa as well as in Bechuanaland (today’s Botswana). Now, the first time, his dairy has been published in full except for the Bechuanaland section ‘which had been rewritten to include the history but to exclude the theology’.

[…] Missionaries. He then gave an order, that no one in furture, neither man nor woman should go to be taught, and that the children should not go and learn to sew. Mr. Venable intended coming to see the king in this business, but yesterday morning about 10, four messengers arrived who had been travelling all night from the capital, in order to bring James Brownlee, the Interpreter, to interpret for the king. They said that William as well as Mr. Hully, my own Interpreter, were not here and that Thos. Halstead, the Boers Interpreter was at Capt. Gardiner’s, a palpable lie, for he was here when the messenger left on Sunday evening, and I tremble to say is now amongst the number of the slain: so the natives to say tho’ Dingarns servant this morning informed me he was not to be killed. The reason for this call from James Brownlee is mysterious, he is a boy and the king likes him; for what end he should have sent in so unaccountable a manner and with such haste is surprising. On Mr. V’s arrival he was surprised to see the Boer guns under the trees and the natives handling them freely, but they themselves not to be found, but described as having gone a hunting, etc. At length Umthlela the Indoona told him that the Boers were killed. Mr. Venable made no reply, and the savage, remorseless Indoona asked him if he did not thank the king for having killed them. Before this conversation, Mr. V. had told him for what purpose he had come to see the king, and Umthlela had asked him what they wanted to teach. Being told the “Book,” he asked, cannot you teach us to shoot, or to ride? At length our friend left and came to the station where as he saw no one about as usual he ex­pected to find us also gone. Our conversation has been partly on the wisest course to be adopted in the present exigency. We agree that we have no security for life. The man who brings our milk informs us that the army went out to-day against the Boers. We tremble for the result. In the evening the king sent to me for some medicine to heal a man who had been wounded by a spear in a quarrel with another Zoolu.

Feb. 7th.—In the morning two Indoonas with an attendant called. One of them patted his breast, a common gesti­culation of friendship. No Indoona had ever been to the station before and they asked to see the hut, waggon, etc. They were remarkably civil. They had been sent by the king to inform me that it was not his intention to kill either me or the other missionaries, for we had come into his country by fews and fews : he could live in peace with us, for we were his people. All George’s people, meaning the British were his, i.e., he liked them, but the Amaboro were not his people: nor where they George’s. He said that all the armies that came into his country should be killed, that the Amaboro (Boers) were going to kill the king: they had come like an army and had fallen into a passion with him. Many other causes were then assigned for their slaughter, as that they had not brought Sinkoyella and his people prisoners. Some of the other reasons I could not well understand nor did I trouble myself about them as there was but one true reason, the dread of their power and that the whole was a premedi­tated preconcerted plan of Dingarn who was anxious to see in order that he might butcher them all at once, I cannot now have a reasonable doubt, tho’ I could not imagine previously that his designs were so treacherous. The thought frequently entered my mind but I rejected it. I said little in reply to the king. I remarked that I had come into his country only to teach the Book: that I was not a fighting person, as those who taught the Book in my country did not handle the gun.

I did not give an adequate description of the dreadful carnage yesterday. I omitted to state that many of the Boers had children with them, some under 11 years of age, as I am informed, as these were all butchered. They also had their Hottentot servants and these were likewise slaugh­tered besides their Interpreter and his servant. The number of slain must have been nearer a hundred than sixty, but if there had been ten hundred it would have been all the same. Dingarn afterwards sent for Mr. Venable and his interpreter. He set the latter to unhalter some of his newly acquired horses which were knee haltered. As he never possessed a horse before, none of his own people were as yet adequate to this office. The usual messenger who comes to the station was thrown yesterday and seriously injured, nevertheless, he was obliged to come this morning, tho’ apparently in great pain. When the above task was performed the sun was too hot: the king went into his hut and there was no con­versation. The thermometer to-day in our hut is at 101o, higher that it has ever been. In the evening, Mr. Venable went down again to the king. He professed that he had given orders that Thos. Halstead, the Boers interpreter, should be saved, but his people were not able to distinguish him. This is Dingarn’s usual method when he does a thing of which he is ashamed, he throws the odium of it upon his people. So he professed great surprise that Mungo should have prohibited the people from attending the teaching, and said he should send a messenger to him. He lamented that the Port Natal people should be afraid of him and said that they had built a fort. He observed that Capt. Gardiner and he had fallen out. He said that he should never send us away or drive us out, but if at any time the teachers should […]