A Narrative of the Ninth Frontier War by the Assistant Military Secretary to Lieutenant General Thesiger.

The Frontier Wars were a series of nine wars (from 1779 to 1879) between the Xhosa Kingdom and European settlers in what is now the Eastern Cape in South Africa. These events were the longest-running military action in the history of African colonialism. The ninth and final war lasted a year and was the a final blow for the last independent Xhosa state, Gcalekaland, thereafter administered as a British territory. 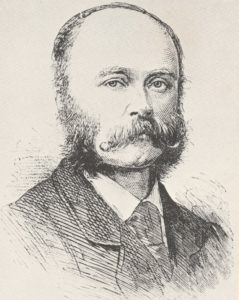 Major (later in life Lieutenant-Colonel) John North Crealock was born in Devonshire in 1837. He was commissioned as Ensign in 1854 in the 95th regiment and promoted to lieutenant the following year. In 1856, the regiment was ordered to the Cape, but then the Indian Mutiny intervened, and so Crealock’s first projected term of service in South Africa became no more than a short stay in Cape Town. This was time enough for him to indulge his love of sketching, and three of those earlier Cape sketches survive in the Africana Museum, Johannesburg. 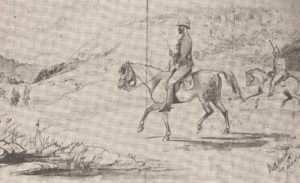 He spent eleven years in India after which he returned to England with many paintings and manuscripts. So, the routine of recording his overseas assignments was already well established before he accompanied Lieutenant-General Frederick Thesiger to the Cape as his assistant military secretary in 1878. 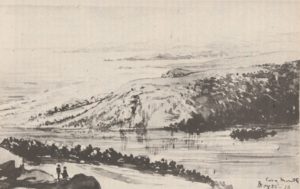 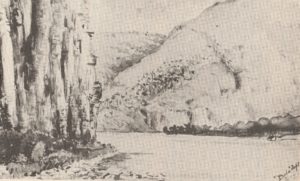 Crealock, a controversial figure in 19th-century British military history, fought in the Indian Mutiny, the ninth Frontier War, and Anglo-Zulu war. Crealock was not popular amongst his fellow officers, and although he was gifted as an artist and descriptive writer, he was arrogant, tactless, opinionated, interfering and probably not very efficient. His general assessment of the military situation was, however, sober and restrained. 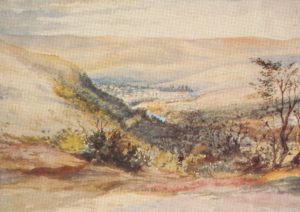 This volume is devoted to an almost day-by-day account (and sketches) of the two months of intensive bush warfare which Crealock’s superior, Lieutenant-General Thesiger conducted to defeat the resistance of the colonial-based Xhosa in the last phases of the Ninth Frontier War of 1877-1878. Another feature of this volume is the fact that twenty of Crealock’s sketches are reproduced, and there are seven detailed maps of the area of operation. 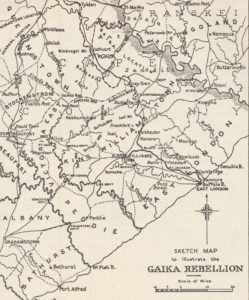 Map of the Theater of War

Instructions for the attack on April 5 were sent to all commanders, and arrangements made for the disposal of the various troops after it was over. As the various corps were to be disbanded, a continuance of operations for a time was impossible. Riding down to Isidengi we met Mr Ayliff and his 1000 or 1200 Fingoes arriving, a wild looking crew — somewhat pictu­resque. They had a great opinion of themselves. The general inspected them later in the day in a hollow square and at Mr Ayliff’s request roundly (be]rated them. They looked surprised as they had been used to words of praise hitherto on very slender grounds. ‘Their duty to their Queen’ was a duty they had never heard of before evidently. That night after sunset the various corps moved from their camps to lay down in the positions whence they were to advance at daybreak the next morning.

It appears Lonsedale’s raid to the Intaba had resulted in our losing 1 killed and I wounded, and 8 of the rebels killed and 3 wounded. Our dinner party at Isidengi (where we moved on our way to Haine’s Mill for the attack) was small, the two A.D.C.’s having been permitted by the general to go with C[om]m[andan]t Streatfield’s Fingoes to get a taste of the Bush.

Left Isidengi at daylight riding down the Gwengwe valley round to Haine’s Mill. All the patrols seemed on the alert. It was as lovely a ride in the early morning as we had found it 3 weeks before in the evening. Our packhorses were to follow for there was no road for a wagon. As we meant to ride on to K[ing] W[illiam’s] Town after the day’s work was over, the packhorses were hardly necessary but I remembered of old, how thriftless the General always was as regarded (sic) his own comfort and I remem­bered how seldom we had been enabled to carry out any plan as to our own movements and it was lucky I did as we did not see our baggage again, and bad to live on what our packhorses carried for several days after. The day was a long, uninteresting one. We could not detect what was happening in the vast forest before us. Now and again a sharp burst of musketry made us hope the Caffres had been found and were standing (sic) [?surrendering.] Little did we know then that it was the Transkei Fingoes (and others too until changed by a better [unit]) [who] fir[ed] wild volleys before they came to a thick bit of bush so as to warn the Caffres, and again they never failed to fire off 100 rounds at every Bush Buck they saw. At 5.30 they began to emerge, firing volleys of valuable ammunition into the air! and singing the most magnificent war songs! No Caffres hardly had been found; the 1200 Transkei [Fingoes] claimed to have killed 8 Caffres with the loss of one of their own men. Streatfield’s [men] had killed 3, and had one man wounded; more had endeavoured to pass by the paths where the Europeans were waylaying. Now we know the ways of these Transkei Fingoes and the fastnesses of the Caffres, we know how easily a 1000 Caffres may have lain perdu.9’ Sandilli himself never left his hiding place, we believe, under the krantz now called after him.

Thus ended our big beat of the Buffalo Poort to our disappointment — but who comes here but an orderly with a despatch from Capt[ain] Warren R.E. commanding the Diamond Field[s] Horse who has been patrolling out in the Green River and Debe Nek direction. Seyolo92 had ‘gone out’ and in making for the Intaba across the open had been attacked and severely mauled by his [Warren’s] men;93 1200 men had made for the Intaba and had joined the fugitives from the Perie. Down sat the Mil[itary] Sec[retary] and wrote many a hasty order from the ready tongue of the General; no more ideas of rest and rations for anyone. Lonsdale on being applied to said his men could press an additional 3 or 4 hours march that evening. Wood was already on the move…….