Edmund Garrett (1865-1907) was a member of the family who produced leading feminists such as Dr Elizabeth Garrett Anderson and Millicent Garrett Fawcett. In 1895 he was appointed editor of the Cape Times and remained there during the crucial period of the Jameson Raid, the lead-up to the South African War. A staunch imperialist, he formed close relationships with Sir Alfred Milner, Governor of the Cape, and Dr Jane Waterston. His letters to his cousins give an intimate and lively account of life in Cape Town until 1899, when he was forced to return to England on account of his health. 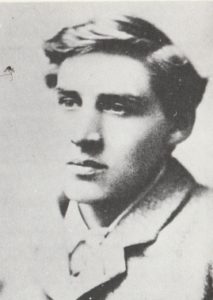 Alfred Milner said Garrett, through the Cape Times, more than once “exercised a decisive influence on the course of affairs…. His position in South African politics became one of such importance that he was practically compelled to add to his arduous duties as editors of the Cape Times those of a member of Parliament”.

Garrett’s political foes and others who disagreed with his policy did not doubt that he was influential but expressed him in rather less flattering terms. Some, such as Olive Schreiner, were inclined to blame Garrett as much as anyone else when war broke out between the Republics and the British Empire in October 1899. 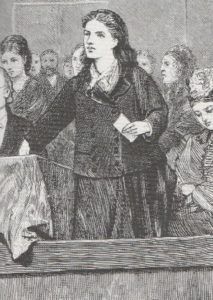 After leaving university at Cambridge, he started his career at the Pall Mall Gazette in London. He went to South Africa to recuperate from tuberculosis, the affliction which was to plague him, on and off, until it finally killed him. He was appointed editor of the Cape Times in 1895, and in 1898 he added to his arduous duties as editor, by becoming a member of the Cape Parliament. But the enormous physical strain was too much for his frail constitution. In the summer of 1899, his health broke down permanently, and he was obliged to leave South Africa in an advanced stage of tuberculosis.

The Garret Papers consist, for the most part, of letters that he wrote to his cousin Agnes Garrett from 1896 to 1898 and so cover the greater part of his editorship of the Cape Times. 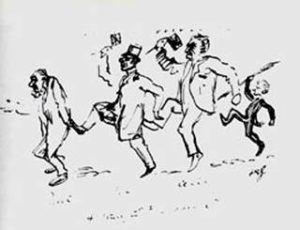 “A Study in Pressure” Sketch by Garrett depicting Kruger, Chamberlain, Rhodes and himself in the rear

Edmund Garrett lost both his father and mother at an early age and was brought up by his half-sister Rhoda, a daughter of their father’s first marriage, and by his two cousins Millicent and Agnes Garrett. Rhoda as well as the two cousins were about twenty years older than Edmund. All three of them were very active in the women’s suffrage movement in Britain which started in the 1860’s. After Rhoda’s death and Millicent’s marriage, Edmund was Agnes’s special charge – she was his “mother, sister and friend” throughout his life. 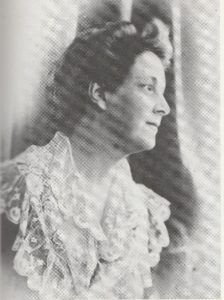 […] Well, the arms had been got in and all was ready except the temper of the men. When that was all right the Rand was to rise and establish itself at Pretoria, and of course as you now see the Chartered Company’s forces, the best fighters in South Africa, were [. . .] at various points for the border and put the thing through, not as charter of course — but as English colonists taking sides in a civil war.’ If done properly there would and could be no bloodshed worth speaking of, and then the fait accompli, — England goes in as umpire, carefully snubs any few Union Jack wavers, and the true Republic of the Transvaal begins by summoning a Conference to get first steps in Federation of the colonies and Republics under own flags. At least that’s my view of the programme. The great thing was to keep both English Government, High Corn-missioner’ and Chartered Company as such, and Rhodes out of it till all was over:’ Rhodes quite ready to face the Cape Dutchmen and carry them with him for uitlander versus Boer if his part was only letting his troops intervene to prevent bloodshed or to see the Revolution home.

All ready but men, on Rand. They not quite. So day put off. That is, the Revolution part found it would take them a week longer to be able to put the rest into the corner where they must take up arms. So they tell Jameson ‘Not yet ready’. (It’s no use denying that concerted action now and will be still less so by you get this.) He, ambitious unscrupulous hothead, jumps to conclusion ‘They’re funking — it will all simmer down — will force their hand’ — and marches in, in spite. Rhodes on Sunday evening, Xmas week, gets wire calmly apprising that Chartered Company forces have begun war on the Transvaal (for that is what it is) in order not to help but to create a revolution!! — Jameson cut wires ‘and by now is either entering Johannesburg or fighting the Boers on the velt both sides armed with such Maxims etc as never get used on both sides in South Africa,’ both absolutely determined, and splendid fighting stuff — the beginning perhaps of a race war in South Africa, perhaps Europe too, such as none can see end of.

Well, it was inevitable. Cat’s out of bag. Rhodes may say and do what he likes, but on Jameson’s luck in the next 4 and 20 hours hangs his career, and perhaps his career in this Colony is past hanging already.

All his years of work, some of it not quite quite clean, thrown away. All our carefully conquered Afrikander sympathy flung into Paul Kruger’s arms.’ Let me tell you the history of one night of my life: Monday 30th Dec 1895. News of Revolution begun hourly expected. I send for Hofmeyr, and after an hour’s bard work, squeeze out of him a word of almost sympathy with uitlander for publication. I know, meanwhile, not from Rhodes, that “something” has begun in Transvaal. Wires blocked: exact news coming in morning.

In consultation with Hamilton and Leonard, who have come down to Cape Town, I concoct a most careful article to secure Afrikander sympathy; the Physician, sent by me, drags by the beard a Dutch master from Normal College to do same into Dutch, ready to print in Dutch and English.

Long wires from Edwards’ at Johannesburg on tension of feeling there, but ignorance of Jameson movement so far: I also ignorant of exact facts.