The Journal of Joseph Tindall, missionary in South-West Africa, 1839-55

The Journal of Joseph Tindall, missionary in South-West Africa, 1839-55 Joseph Tindall, and his wife arrived in Cape Town in June 1836, and from 1839 to 1855 he was a missionary at various places in the territory now known as Namibia.

The extracts from his journal, recorded in this volume, were transcribed by his daugher-in-law between July 1909 and December 1912 when she passed away. She destroyed the original journal. This transcription was edited by his grandson, B.A. Tindall, and published here as VRS Volume I-40. 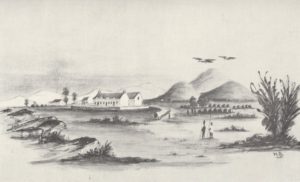 Nisbett Bath Mission Station c 1850 (from a watercolour by an unidentified trader H.B.) 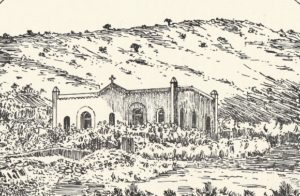 The journal starts with a description of his early life, his journey to Cape Town, and eventually to what is now called Namibia. Tindall, belonging to the Wesleyan Missionary Society, initially worked at the Nisbett Bath Mission Station (today’s Warmbad), with Jonker Afrikaner in Damaraland, and at the Concordiaville Mission Station (today’s Klein Windhoek). He spoke the Namaqua-Khoi dialect and published a grammar and vocabulary of that language, now called Nama, in 1856. 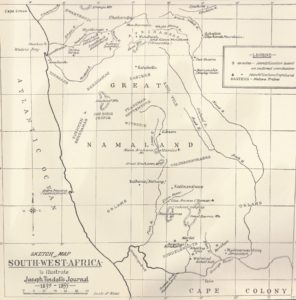 In 1843 he and his son, Henry established a mission station, at what was called Wesley Vale – today’s Leonardville west of Rehoboth, and in 1845 at Elephant’s Fountain – today’s Gobabis. His journal includes much information about local customs and conflicts between Damara groups.

In 1855 Joseph Tindall left Namibia and was transferred to Somerset West and retired in 1858. He moved to Robertson where his son Henry was Methodist minister and died there in 1861, aged 54.

It is dangerous travelling in Bushman fields. They sometimes poison pools and fountains of water in order to destroy wild animal which may chance to drink. They follow the footprints of these till they come upon the dead. Several pack oxen belonging to the Chief of the Red People drank at one of the poisoned pools. Most of them died from the effects.

The case of Hendrik, who caught two Damaras eating his lamb5 and hanged one on a tree, and beat the other almost to death was investigated after my departure. Hendrik was ordered to appear before the council. He went quite beside himself, confessed to hanging the one Damara and flogging the other almost to death and said he had come to fight, asked why they did not stand up and drew out a butcher’s knife. This was taken from him, one man’s arm cut in doing so, and he was secured. He then in a rage asked ‘Who has seen God? Who has returned from Hell? I do not believe there is such a place. There is one present whom I will shoot at the first opportunity.’ His gun and cattle were taken from him and he was beaten on his back. This brought him to his right mind. The punishment was lighter than he merited, but was as severe as his judges could inflict, their own unpunished crimes causing them shame.

Aug. 11th. Set off with waggon east of station.

Aug. 12th. Out-spanned at Tweefontein, a place where there are two small streams; disappointed in expectation of a greater quantity of water. He who turns the barren wilderness etc. can cause these to increase.

13th. Halted among rich and poor Cattle Damaras. The latter are cattle herds for Ameral and his people. This is an imprudent mixture and contrary to my advice, which was for each nation to know the bounds of its own field. May God make this arrangement turn out for the furtherance of the gospel.

14th. Halted at our cattle farm, about 50 miles east of station The fold quite surrounded with Damara huts. There were 51 inmates which depend entirely (the milk of a few goats excepted) on their success, and the success of a few field roots. What can be done for the thousands of poor Damaras and Hottentots living in the bush? A great number of rich Damara chiefs are living apparently at variance with each other, having more or less intercourse with Hottentot tribes, occupying the same country. Two influential chiefs have contrary to my advice been permitted to and reside south of Elephant’s Fountain. In many cases the cattle of both nations drink at the same water, and this is the occasion of much strife. A short time after we had unyoked, a rhinoceros made her appearance, directing her course to the waggon, pursued by poor Damaras. A great many people ran to meet her which threw her into great confusion. She turned upon one party; others ran up to her, and threw their assegais at her, a few of which entered her thick hide. One Damara was so bold as to attempt to hamstring her. Out of compassion to the animal I requested Henry to give her a musket ball; I quickly gave her a second, which brought her on her side. The Damaras soon divided her. I then went to the water. There were a few pools of dirty rater and several wells of clear water. The Damaras were standing in the wells, ladling the water out with deep wooden vessels, and pouring it into troughs out of which the cattle drank. Several hundred were watered in about an hour and a half. When they were driven off to graze the wells were secured with thorn boughs. About midday, our cattle were driven to the water. I followed, anticipating the sight I should witness, having some knowledge of Hottentot indifference to the wants and comfort of cattle, having seen it hundreds of times to my great grief and annoyance. Begging, praying, insisting, encouraging, appealing to Christian principles, are all of no avail. I have tried all, and I am still striving, but nothing will do, except the discipline exercised over the ox and the horse, which, alas, are more knowing than they in this particular; they drink daily out of the dirty pools, in which their cattle fight with each other, being angry at having so short a supply. The cattle hastened to the wells, took a longing gaze at the clean water, then had to turn off and drink the dirty water of the pools. Yes, the Hottentots pride themselves on being much superior to the Damaras, for whom they invariably have a term of contempt; Specially Ameral’s tribe, who call themselves Oorlams, and expect the Damaras to give them this term of superiority, the origin and meaning of which I have never been able to ascertain, and all that they know of it is that, when they were in the service of the Dutch farmers, they were sometimes encouraged in their work by being told ‘Jou vader was een gooie Oerlam gewees’. Nevertheless, they have some good qualities, and now and then I see a glimpse of shame, which I consider a sign of the dawn of day. O that it might break forth before they plague the life away of a few missionaries! ‘Cattle-farm’ may sound strange in the ears of the lend of missions, more than it would if they could see matters on