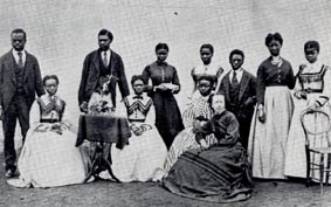 Jane Waterston (1843–1932) accompanied the missionary, Dr James Stewart, to the Eastern Cape when he became principal of the Lovedale Institution. There she started the Girls’ Institution but her real desire was to work as a doctor amongst women in the interior of Africa. In 1874 she returned to England where she was amongst the first women to train in medicine at the London School of Medicine for Women. After a brief and disillusioning stay in Nyasaland, she moved to Cape Town where she was a notable figure, participating actively in the political life of the town. She retained her friendship with James Stewart throughout her life, writing to him regularly on a wide variety of topics. 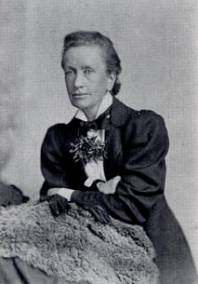 caring for him does not depend on his being good but on his being Louis, so you see I have a good deal of the woman about me yet.

I am busy and new patients turning up. I am satisfied there is a corner for me to fill. I have spent part of this evening fitting a truss on a young girl. It was dangerous for her going without but she never would have allowed a man to do it. I have had two gentlemen patients today and I am getting more of them. I shall not refuse any without good cause. I am also getting more black patients. They feel, I think, that I treat them like human beings and not niggers as the term is here.

I give a lecture in May for the same Society as last year. I have refused all the other Societies. It will be a sequel to the one I gave last year and the title “The Higher Education of Women. Its duties and responsibilities”. I have not begun it yet but I am in a thinking mood at present so hope to evolve something.

My letter has got to be longer than I intended. One puzzle here is, where the bounce has gone to of our Dutch brethren, they are very docile at present. Sir Hercules has got a well deserved slap in the face and MacKenzie is to the front again. Noble is greatly pleased for he has been a very loyal friend to MacKenzie and has steadily backed him.

I must stop or you will stop half way in reading this screed. Much love to Mrs Stewart and the children. Yours very truly, Jane E. Waterston.

I went to Moore when I got the Express and gave him the paper and spoke to him about the Argus. I have been again and again to his Office about it and never found him in. I think round about ways are very long.

I send two Cape Times which will show a marked change of front in the course of two or three days. Read them in order. I should have sent them some days ago but was waiting until I had time to write.

I hope the parcels arrived all right. I wrote to Mrs Stephen telling her I have sent them off.

I have been doing very little writing for the last two or three months simply through press of engrossing work. Many confinements and other very anxious and worrying work taking it out of me in every sense of the word and sending me home so tired at night that the sight of pens and paper was enough. Sunday work was the rule and sometimes all Sunday. This is the first real Sunday rest have had for a long time and so I am writing a few letters. I have been thirty years now here and have gained a lot of experience in every way and yet I feel if I knew nothing. I am engaged already for a number of confinements next year. What a wonderful difference the antiseptic method makes in a confinement. My patients are delighted with the sweetness of their rooms and if absence of fever, even of milk fever. To do it perfectly takes any amount carbolic wool and gauze, Iodoform pessaries, Quinine and Condy. But if purity and sweetness of the patient, bed and room are worth it all. I never syringe now. It does not always do and with the present method is not needed.

If l am spared and can afford it I will go Home in two years time form surgeon’s Diploma as I can get it in Edinburgh now. I also want to perfect myself a little more in medicine and, last but not least, I am anxious to see m father and mother again for they are getting very old. Death has been busy among people I know at Home, so many deaths, not like Mr Weir’s, full of days with a gentle fitting end.

I am satisfied with the profession I have chosen. When most worried I have never wished myself not a Doctor.

It is a pity you do not get the Cape Times. I like it better than the Argus although in many things not agreeing with it. The Times gave full reports of the Synod, far better ones than the Argus and one longed for one of our old Scotch heroes to stand up and lash them with his tongue. For an elder to stand up an say that total Abstinence was the work of the Prince of Darkness and for others to wish that no member with the blue ribbon on should get the sacrament, a to please the wine farmers, made one think that the Devil himself must be inspiring the deliberations. What hope for the country when such is the highest spiritual teaching.

I send you the Times with the leader on the close of the Synod. I only hear