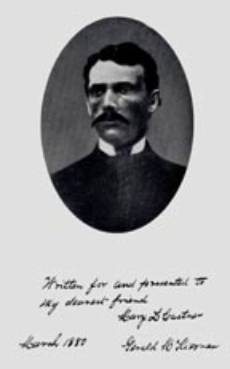 Gerald McKiernan was an American trader, operating in South West Africa in the last decade before German colonial rule. The manuscript consists of a narrative of 5 years’ travel in Africa, from 1875 to 1879, and a diary which he kept from 1877 to 1879. The author travelled widely, probably reaching well into Angola. 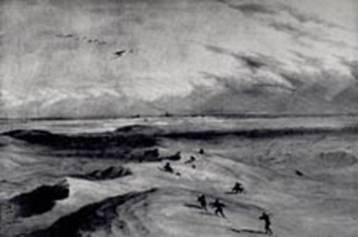 and were often not as stupid. It always seemed to me that a native knew more, or was quicker to comprehend at 12 than at 25. I never thought it possible that anyone could be so stupid as not to be able to turn a grindstone, which is as simple a process as I know of, but we had Bushmen with us who could not do it after repeated trials. At walking or running few can excel or equal a Bushman, but at lifting weights or any bodily labour they are of but little use; but the women bear large burdens on their heads for miles with ease. I never saw any signs of love or affection between the sexes. I suppose they have preferences, but not such as exist amongst civilized people. I have observed women kissing their children, but I cannot say whether it was in imitation of whites or not. Different tribes have different manners and customs, and one description will not do for all. Damaras—Ovaherero—will stare you out of countenance when at meals and, as Mark Twain says of some of the natives of Palestine, swallow every time you do; but I have found true native politeness amongst Bushmen. They were very fond of squatting about the tent and looking at the objects that were strange to them, but when food was brought, they almost invariably retired to a distance; very often when they were half starved too. Their life is that of a stray dog, full today, empty tomorrow; and like a dog, when they are full, they coil down and go to sleep (and) never rise until forced by hunger. Happy existence: no care, no ambition; nothing but the animal wants to satisfy.

I never could determine whether they have an idea of a future existence or not. They have no rites or ceremonies that I am aware of, excepting that of driving out the evil in sickness, which is a powwow something like that performed by the Indians, and often described. I once asked a Bergdamara who made him; he did not comprehend the question. I then asked him where his people came from in the beginning. He said that they came down in the rain; all of their blessings follow the rain, so that was a natural deduction. I then asked him what he thought became of the sun when it set. He said that a man carried it back to the place of rising while we slept. I was satisfied, and left him in darkness. I once asked Noora, an Ondonga Ovampo, what would become of him when he died. He said the hyenas would eat him—the Ondongas do not bury the dead. ‘And what then?’ I asked him. ‘When the hyenas have eaten me, what is there left?’ was the question I got in answer to mine. The Ovaherero must have an idea of immortality. At the death of the head of a family all the choice oxen of the herd are slaughtered and usually of a certain color that he most admired. In fact, they are selected, when calves, by him, and are on no account sold or slaughtered till his death, if they survive him. If they die before he does, they die a natural death, but that is no loss: they are eaten all the same. A Damara never likes to speak of his belief and, I think, has a great dread of death. I do not think they believe in natural deaths, but attribute it to evil influence of others. They are firm believers in the evil eye. They practice circumcision and have a grand ceremony once a year, when bullocks are sacrificed. The animals are smothered to death; no blood is shed in taking the life. What importance they attach to the observance, I do not know; I never could find out, but I think it likely that they practice it from custom, but have long since lost the import of it. Many of the Kaffir tribes practice the same rite; all undoubtedly came from the north, and may in past ages have acquired it in the countries bordering on Egypt. It is thought by some that there is Arab blood in the Kaffirs. The Bergdamaras cut off the first joint of the little finger of the left hand of the girls; I could never get a reason for it. In some of the Kaffir tribes, Basutos, Fingoes etc., at circumcision the boys and girls are covered from head to foot with white clay and driven from the habitations, and for nine days no one is allowed to speak to or give them food. They are supposed to steal their living for that length of time, and I am afraid that they never forget the lesson.

Nearly all tribes have witch doctors who are also prophets, and

are always consulted before any undertaking by the chiefs who maintain them. They are cunning and unscrupulous and manage to deceive. Like all oracles they are fond of good living and always 4emand oxen to be slaughtered, otherwise the oracle will not Work. Rain being the great blessing, it is manufactured to order. Raindoctors are found in most of the tribes, Some more potent than others. Nahanda, chief or king of the Evara (Evare), a tribe of Ovampo on the Cunena River (Kunene), is the great raindoctor those latitudes, and large presents of cattle and ivory are annually sent him by the surrounding tribes, some living 300 or 400 miles away, for the supply of rain, that the crops may be planted early by those that live by agriculture, and to grow grass for the pastoral people. The raindoctors work in secret and the process is unknown, but as the season of periodical rains does not often vary more than month and usually begins with a new moon—and they reckon time by moons—they are never out much, and manage to hold their reputation If they fail in their predictions, they manufacture a good excuse, and so keep their reputation. At Lake N’Gami I was warned at the approach of the rains not to shoot any crocodiles, if there were any clouds or signs of rain, as it would defeat the working of the raindoctor.