Sir Walter Stanford served for many years in the Native Affairs Department of the Cape Colony, retiring in 1907, when he began to write his memoirs. The first volume describes his youth, education at Lovedale College and his work in the Native Affairs Department during the 1870s, concluding with the Cape Native Laws and Customs Commission in 1881–3. 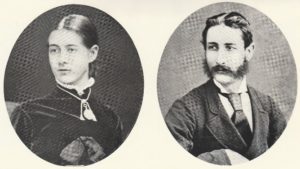 On both his father’s and his mother’s side, Walter Ernest Mortimer Stanford was descended from the 1820 Settlers. He was born on 2 August 1850 in Alice in the Eastern Cape. When he was six years old his father was killed in a riding accident, leaving his mother with six children to care for. Walter was sent to live with his uncle, who was a missionary in charge of the Glen Grey Mission Station in the Queenstown district, where he stayed for three years receiving some schooling from his aunt. He then re-joined his mother in Alice and underwent two years of schooling at the Lovedale Missionary Institution. This, his only formal education, terminated before he was twelve years old.

The Native Laws and Customs Commission – Stanford at extreme Left

After his retirement he began to place on record his reminiscences of his life and work. For these recollections he relied partly on his memory but, to a far greater degree, on written records. From 1876 until 1933, within three months of his death, he kept a diary, making entries on almost every day during that period. These diaries comprise no fewer than seventy-two volumes. Despite many interruptions, however, his Reminiscences, which are now published in two volumes, were completed in 1929.

Walter Stanford as a young man

On 1 July 1863, just before his thirteenth birthday, he became a clerk at Glen Grey under his uncle, who at that stage had been appointed as a Government Agent for the “Tambookie”, the name used for the abaThembu people.  So, Walter Stanford entered the service of the Department of Native Affairs in which, save for a few months, he was to remain for forty-five years, and through which he was destined to exercise a profound influence on the development of South Africa. 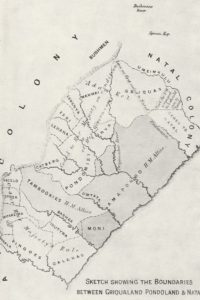 Sketch showing the boundaries between Griqualand, Pondoland and Natal 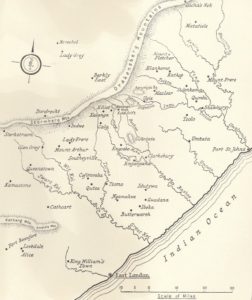 Sketch map of the Border country, to illustrate Stanford’s Reminiscences

[….] warnings of intended treachery reached the magistrates but the meeting passed over without any overt act. The conduct of Makwaai’s men however was such that Mr. Brownlee was satisfied of their intention to rebel.

Following on the meeting traders were warned to leave the district. In doing so they were not personally molested but their stores were looted. On the evening of the 3rd October Ramhlagwana warned Mr. Brownlee that an attack on Mooiterie’s Kop had been arranged for that night. Ramhlagwana’s son Stampi and his brother Umsi were in the plot. On this information Mr. Brownlee and the officers with him put up defences and this becoming known the attack was deferred. On the morning of the 4th it was decided that Mr. Brownlee and party should return to Kokstad and Liefeldt [with] his clerk Austin fall back on the Fingo locations southward where later he successfully organised a defensive force. Ramhlagwana and his brother Sili with fifty armed men met the chief magistrate as he approached the border of his location.

The hostile Basuto, some four hundred strong, who were threatening a flank attack from the right, fell back on observing this movement. For about five miles Ramhlagwana kept with Mr. Brownlee and then turned homeward. The Umizimvubu drift was not far off when some mounted Basuto galloped forward to intercept the chief magistrate. These were checked and at the river a force of thirty Europeans and one hundred natives thoughtfully sent forward from Kokstad by Mr. J. T. Wylde, then Magistrate of the Mount Currie district, was found.

A laager had been formed by farmers from the neighbourhood near this drift and, leaving Commandant Strachan in control, Mr. Brownlee proceeded to Kokstad and energetically entered upon the task of organising such forces as were available to meet the emergency.

For an hour after Mr. Brownlee’s departure from Mooiterie’s Kop Liefeldt and Austin waited there with sixty loyal Fingos of the Hlubi tribe. The treacherous petty chief Umsi with about forty Basuto were also there. After the interval mentioned Liefeldt dashed out on horseback with Austin and got through to the location of the chief Ludidi and other Fingo headmen on the Kenigha River. The people there were in a state of panic, but the presence of their magistrate restored confidence and [they] faced the Basuto, who were already devastating the country around. The sixty Fingos who were at Mooiterie’s Kop belonged to three locations. They were suffered to depart with their arms by the Basuto headman, Sekaki, but were afterwards attacked and lost eleven men in cutting their way through the Basuto.

Umhlonhlo now came forward as the friend of the Government. He sent a congratulatory message to Mr. Brownlee and expressed readiness to take the field with his men under [the] command of the magistrate. Umhlonhlo’s loyalty in this critical time would have been very valuable to the country and it was even suggested that his well-known influence with the Bathlokoa chief, Lindingwana, might be used to detach that chief from the rebel Basuto with whom he was rightly suspected of being in sympathy.

It was not without grave misgivings that the experienced Chief Magistrate accepted the offer of Umhlonhlo made through his magistrate. But Hope was confident and the issues at stake were very important. So, accompanied by Umhlonhlo, Hope attended a preliminary meeting at Hlankomo (Chevy Chase) and then proceeded to Maclear. Here he met the magistrates of Maclear and Tsolo, Thomson and Welsh. Umhlonhlo and Lindingwana played their parts with consummate skill. ‘They were children of the Government.’ In reality Lindingwana was pressing Umhlonhlo to begin operations then and there by the murder of the three magistrates. In fact they had the magistrates at their mercy. Umhlonhlo refused. He had been promised arms and ammunition for his men, and until these were secured he would not move. Thus the meeting broke up with protestations of friendship and loyalty from these two chiefs.

Hope and Welsh returned to their respective magistracies. Meanwhile the Chief Magistrate had rapidly got forces together and, with these, Commandant Strachan attacked Makwaai, Sekaki and other Basuto leaders driving them and their adherents [….]

Born in Scotland, Mr Macquarrie has been an educator in South Africa for almost thirty-six years, beginning as a teacher, serving as a principal, and then becoming an inspector under the Cape Education Department, where he supervised European, Coloured, and African schools. When the Bantu Education Act was passed in 1953, Mr. Macquarrie, was transferred to the education section of the Native Affairs Department. Because he opposed both the principles of the act and the methods of its application, he resigned as an inspector and became senior lecurer in the Faculty of Education, University of Natal, Pietermaritzburg. He has written prolifically on education and social problems and is well known for forthright views on race and education.