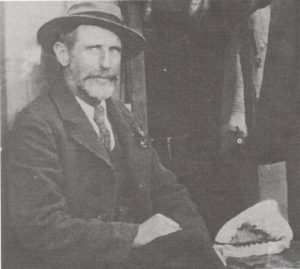 John (Jack) Moody Lane, was a born Ulsterman, and later became a burgher of the South African Republic. As a storekeeper in the hamlet of Hartbeesfontein in the Western Transvaal, he was still loyal to the British cause, and faced dire penalties if he did not go to war with his commando. Refusing to bear arms against his mother country, he was placed in charge of the ammunition in the main laager of General Piet Cronjé, Deputy Commandant General of the Republic, in command of all the Boer forces on the South-Western front. 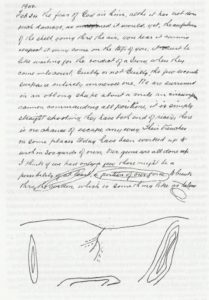 Page out of Jack Lane’s Diary

Not only was he opposed to Kruger and ‘Krugerism’, but he was incensed at being commandeered. ln his diary, he criticises much of what he sees and hears about Cronjé. This viewpoint makes the work unique and unmatched by any other diarist in the camps of the Boers. He has bouts of introspection, self-pity and concern about his Boer wife and their large family. Yet he can laugh to himself about his position and what he sees almost daily of the self-important General.

Despite his evident prejudice, there is much of interest in his descriptions of life in the laager and at ‘positions’. His two-sentence sketch of the Comte de Villebois-Mareuil equals the best of its kind, as does his description of the chaotic withdrawal from Magersfontein and the nine days of bombardment which ended in the Boer surrender at Paardeberg. 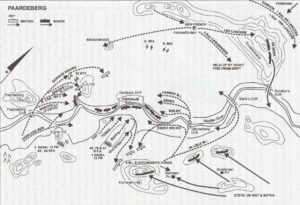 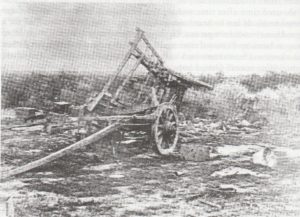 Devastation after the Battle of Paardeberg

To establish the proper context, the editor (his grandson) has placed before the reader facts, views and opinions including those emerging from other contemporary accounts; archival material; family letters and standard histories. Reference is also made to Jack’s spending the rest of the war as a prisoner on St Helena and his selection after the war as a member of a delegation of Boer farmers to tour Canada, Australia and New Zealand with their wives, to report back on ‘Agriculture in the Empire’. He deposited the diary after the war in Ulster with his eldest brother.

In 1922 Jack Lane was eventually awarded the Medalje voor de Anglo-Boere Oorlog 1899-1902, which recognised his services as Opperwachtmeester. 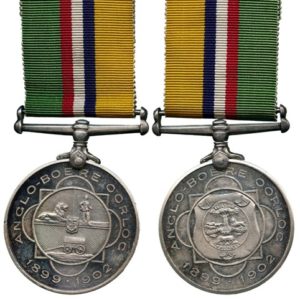 The British are now charging at all points, seems to be a combined attempt to get home, men rushing about from one place to another. North sends to West for help, and vice versa, here you hear a cry they are thro another we have beaten them back, certainly this last half hour has been the warmest I have seen so far. I think the British have gained no points. I see several of the burghers dead and wounded. The fire is hot, shells now flying in earnest. The ‘Zip, Zip; of the Lee Metfords as it goes close by you, sometimes in the ground sending sand all over your face. Sometimes I imagined I was hit and said now I have got it. Men come running from the trenches, saying ammunition was running short. I had to go over river, to show them where it was and got several boxes over under difficulties, the river strong and the boxes heavy, several boxes fell into river but suppose when it goes down will be able to get them again, or rather I should say the British I think will have that pleasure. Had hardly got into cover, when a lyddite burst just on the top of us, painting us a nice olive green colour.

About four o’clock, the British commenced their charging tactics again, all round at every point. About five hundred yards lower down the river our pom pom is placed on the opposite side to what lam and has started firing at the rate of about forty five per minute, on a body of British advancing. I have a good view. Immediately behind where pom pom is placed, the whole space is covered with horses, mules, oxen and sheep, all crowded together Just like a shower of hail the shrapnel burst, one after the other from the British, mowing the poor brutes down just as a reaper would mow wheat, when the stuff knocked up by these shells cleared away you could see nothing but dead cattle covering a radius of a hundred yards, some giving the last kicks and struggle of death, and horses on their backs with their legs stretched up in the air. And I see five men also lying who were running down the river bank to seek shelter. It is an awful sight. The reason of this special fusillade on this particular spot is, the British have evidently located the pom pom and concentrated a whole battery’s fire on it. If one gets in close proximity of where one of our guns are, you have a warm time of it, as the British never leave off till they have either silenced it, or it has been removed. They hardly leave a yard of ground without a shell falling on it, so well do they search the place.

I get sight of Smith on the other side of river (he and Fuller having left me about an hour ago) corning up along river bank. As he was just opposite me, a shrapnel burst right over him covering him with stuff, the bullets striking all round him. I don’t know why he did not get hit. He seemed quite stupefied as I shouted time after time to him to take shelter, he simply stood there bewildered. At last he heard me, and takes shelter where he remained for a good hour — could not get out. The laager is now properly on fire, every other wagon burning. I crossed river again, to see about ammunition just before sundown and Smith came back with me. We stopped here until seven o’clock, when firing ceased. Over, I hope, for the day.

The loss on our side, I hear, is heavy; but number not known, nor do I think will ever be. If you find one dead, you try to make a hole and put the body in. Some of them barely covered. So lots are killed that nothing will be ever known of till after the war. What the British loss is, I cannot say, but it must be heavy. We come over to wagon and start making food, had nothing since this morning. All round wagon, dead horses, mules, oxen and sheep, the stench is beginning.

Having satisfied the inner man, I go up to laager, or rather, what was the laager, which is all on fire, the night is dark. The flames making a grand sight, very few wagons are left intact, a sad sight, nothing but the irons laying red hot on ground. I see General, who gives order all remaining ammunition is to be loaded off wagon, and spread here and there over ground. Ask General, ‘Are we not going to push on tonight out of this Hell?’ Says, ’Decidedly not? I am surprised at this, as one point is still open, which, he could, I think, get thro’ By tomorrow we will be so completely surrounded. Then no chance of getting out, nor do I think he will even try. De Wet, he says, with reinforce­ments will release us, but in my opinion Cronjé must do something on his part. The British have all the hills in their possession and will be able to keep back any help that may come from outside to release us. Have just seen all ammunition loaded off and each box about three yards apart, this makes the chance less of being blown up. I am thoroughly done up, make a bed in the best way I can, in close proximity to a lot of dead mules and oxen. The stench is awful. It is the best place I can get. My feet are touching the dead animals. I am off to a sort of sleep.

Awakened long before dawn and could not get to sleep again. A sort of uneasy feeling and thinking of all events of yesterday’s fight. About daybreak, General sent his Secretary, Kaiser, with a flag of truce to the British lines on our right, asking for forty eight hours armistice in order to get our wounded into some place of safety or shelter, as they are lying all over the place in the different trenches (I think there is a bit of ‘Schlenter’ in this). So long as Secretary is away with flag of truce, we know there will be no firing, so took the opportunity of going a bit round. (The British will be fools if they grant this armistice as asked for).

William Lane was born in the Potchefstroom district of the Transvaal. His schooling started at an Afrikaans-medium farm school in the same district and ended at St. John’s College in Johannesburg. After serving in the Royal Navy in the Second World War he obtained degrees in Arts at Rhodes University and Law at the University of the Orange Free State.

He had spells as an in-house lawyer and as an advocate at the Johannesburg Bar. Most of his professional career was in a leading firm of attorneys in Johannesburg of which he became senior partner. In days before ruthless specialisation, he served clients, interests and causes across a wide field.

He grew up in an environment and a family carrying the scars of the Anglo-Boer War. His interest in the War was aroused by the discovery in Ireland of his Ulster-born grandfather’s diary. The latter had been with the commandos of General Piet Cronjé at the battles of Modder River, Magersfontein and Paardeberg.

The diary’s hostility towards the Boers and their cause raised questions of its credibility. In fairness, not only to the historical record but also to descendants of different political persuasions, research was necessary. This and his professional commitments caused a delay in the publication by a publisher of unquestionable independence.