Of all the many wrecks off the South African coast, that of the Grosvenor has usually been portrayed as the most romantic. 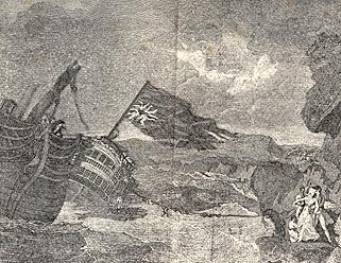 The Grosvenor, an English East Indiaman, sailed in June 1782 from Ceylon (present-day Sri Lanka) for England, but was wrecked some miles north of the Umzimvubu River (present-day Port St Johns). It had on board one hundred and fifty men, women and children. After the ship had struck the coast one hundred and thirty-six persons found themselves on African soil in a part inhabited by natives of the continent. The whole party, except two, decided to make their way overland to the Cape of Good Hope, which they believed they would reach within sixteen days. What befell the survivors, the misery they endured and the hardships they experienced, during the three-month ordeal that ended with only about eight souls, including a boy of eleven, reaching the Dutch Colony, is related in the first part of this volume.

The Account by John Hynes – One of the Survivors

Because the women and children travelled much slower than the young men, they decided to divide into separate parties. John Haynes was part of a group of about forty-three younger men who travelled ahead but they took a young boy of about seven, named Law, whom they agreed to carry by turns whenever he should be unable to walk.

Hayne’s account goes into graphic details of how they survived by obtaining food from the sea including consuming dead whales, what they had to do to quench their thirst when they could not find fresh water, and how most of the members of the party died, one by one (including the young boy) on the way. 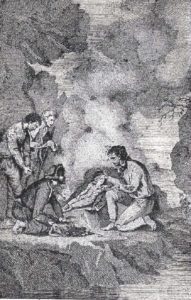 The unhappy fate of Master Law

When the news of the wreck reached Cape Town, a relief party was sent out by the Dutch authorities. The party was obliged to turn back owing to the hostile attitude of the Thembu tribes but came across another eight survivors whom they took back with them to Cape Town.

Van Reenen was a member of an expedition that was undertaken in 1790 to look for more survivors of the Grosvenor after reports reached Cape Town of some white women living among the amaXhosa. The expedition found the wreck of the Grosvenor close to today’s Port St Johns and understood from the natives that most of the goods that washed ashore had been taken to the Portuguese trading station in Delagoa Bay to be sold. The white women reportedly living among the natives were not found. 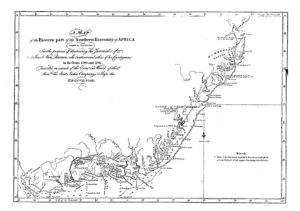 This map was compiled by Captain Riou when he published his literal translation of Van Reenen’s journal in 1792. Riou mentions in his introduction that in compiling the map he copied various parts using, amongst others, a maritime survey of 1785 and, for the interior parts, maps of the journeys of Sparrman and Patterson that took place in the first half of the 1770’s.

[…] by signs advised them to go inland, and pointed out to them the path they were to pursue. This path they accordingly took, and after having travelled about three miles, came to a village where they found only women and children.

Here they rested awhile, and the women brought out a little milk, which they gave to master Law. The milk was contained in a small basket, curiously formed of rushes, and so compact as to hold any liquid. During their stay, they examined several of their huts, where they had an opportunity of seeing the manner in which they churned their butter: The milk was put into a leather bag, which being hung up in the middle of the hut, was pushed backward and forward by two persons standing at the sides; and this they continued to do, till the butter was arrived at a proper state of consistence.

When it is properly prepared, they mix soot with it, to anoint their bodies. This operation not only serves them as a security against the intense heats of the climate, but renders them active, and gives them that agility which the inhabitants of Africa are well known to exhibit both in the chace and in battle.

While the travellers were resting themselves, the men belonging to the village returned from hunting, each bearing upon the point of his assaygay, his division of the spoil they had taken, which consisted of a piece of a deer, weighing about ten pounds.

As soon as they saw the strangers, they gathered round them in a ring, and seemed to gaze on them with admiration. After which, they shewed them two bowls of milk, which they appeared to be willing to barter; but as the English had nothing left that would prove acceptable to the natives, they had the mortification to see it applied to other purposes.

The bargain being declined, the savages brought from their huts sticks fuzzed at the ends, and seating themselves round the bowls, dipped their sticks into the milk, and thus, in a short time sucked the whole of it up.

They had scarcely finished their meal, than they all rose hastily up, and in an instant went off in different directions, at which our people were very much surprized. There were at least forty of them. The noise of some of their companions at a distance seeming to have awakened their attention, they scampered into the woods, and were out of sight in an instant.

It was not long, however, before they returned with a deer they had killed; which our people begged very fervently to be permitted to partake of, but in vain; and night coming on, they insisted that their visitors should quit the Kraal. This they were forced to comply with, and after walking four or five miles, they laid themselves down to rest.