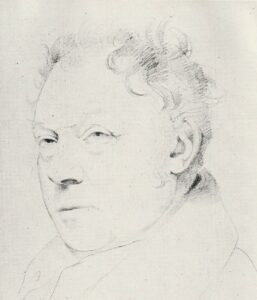 William Somerville, an Edinburgh doctor, accompanied the invading forces of Major-General Craig when the British took the Cape in 1795. He remained at the Cape for some years, accompanying Major-General Dundas to the eastern districts during the height of conflict on the frontier. Subsequently he accompanied an expedition to the Orange River. On both occasions he recorded the cultures of the indigenous people whom he met, and the flora and fauna.

In 1797 Lord Macartney, the Governor appointed Summerville as Secretary of the Court of Appeal in Cape Town despite his ignorance of legal proceedings. He was later appointed as assistant at Graaff-Reinet. From 1797, there was a concern about the Cape’s meat supply, which to a large extent, was dependant on the eastern districts for a considerable portion of its supply. The food supply crisis was directly responsible for the 1801-2 expedition to the country of the Tlhaping beyond the Orange River to barter cattle with the natives, primarily to replace the draught oxen lost by the grain farmers in the 1800 drought. 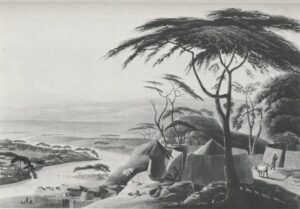 Town of Leetakoo (by Samuel Daniell)

The 1801-2 expedition, also called the ‘Truter-Somerville Expedition’, visited Lattakoo on 26 November 1801 and to their astonishment they found a town ‘as large as Cape Town, containing several thousand inhabitants. Bartering began under Molehabangwe’s supervision five days later and carried on for another twelve days but without much success for the Tlhaping could not be persuaded to exchange their precious cattle for unwanted trade goods. 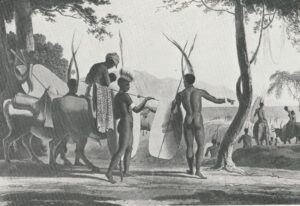 Xhosas on the March (by Samuel Daniell)

The Tlhaping were the first of the Southern Tswana to have met up with Europeans. In 1801 they were ruled by Molehabangwe and was based in their capital called ‘Dithakong’ located between today’s Kuruman and Mafakeng in the North West Provence. The town of Dithakong was called Lattakoo by the missionaries and explorers. The characteristic Tswana chiefdom has a large single settlement, of up to 10 000 residents, and possibly a few smaller outlying villages. A Xhosa Village (by Samuel Daniell)

Judged in terms of the effort, time and money expended, the expedition can be considered a failure. However, we are left with a very interesting journal by Dr William Somerville and many drawings made during the expedition by the artist Samual Daniell.

…people called Bastards, who are sprung from white people and Hottentots, they are the most intelligent and faithful servants that the farmers can employ, it is to be apprehended that many of them have made their desire of instruction a pretext for indulging in habits of idleness, they have left their service and followed the missionaries, by which not only the individuals who employed them but the colony at large materially suffers. The cattle and sheep which they had earned are the only means they have of maintaining themselves and their numerous families, of cattle, sheep and goats there are about 5 or 6ooo collected at this confined spot; the water is not super abundant, and however fertile the soil may be it is now so overstocked that every blade of grass is consumed. The milk which is almost the sole diet of the children becomes daily more scanty, the want of pasture has reduced the cattle of every sort to a miserable condition, even our draft oxen lost flesh during the few days we halted, instead of gaining from the rest they had. These people attend divine service morning and evening with regularity, but the influence of the principles which they are taught upon their moral conduct is not very apparent, not one of them has shewed the least mark of industry or drive to learn any useful art, the whole day is spent in sleeping and smoking. Were they very sincere in their professions, it is probable that they would shew a warmth of heart and regard for their indefatigable teachers, but the contrary of this is so shamefully conspicuous that no measure which prudence has permitted the latter to make use of has been successful in prevailing upon the Bastards or Hottentots to work, the small garden they have is solely the fruit of their own labours under the rays of a scorching sun — during our stay there was but one bastard who worked.

……..The Koras profess a great disposition to learn, but the same obstacle recurs that has been found with regard to the Bosjiesmen — the difficulty of feeding them and the danger of exhausting their scanty stock, which would inevitably drive them to become plunderers. Even at the moment there is very strong grounds to believe that some of those who attend Church are connected with the Bosjiesmen who rob the colonists.

On the 12 Novr. we advanced NE. 5 hours to a rivulet of excellent water, called Wit Water. The country is still Karoo — the grass (called by Colonists Sour Grass) becomes more plentiful as we remove from the residence of the missionaries. The water is encompassed with pitfalls that several people fell into them. Within couple of hundred yards of the brook the axle which had already given so much trouble broke in pieces, and the waggon fell to the ground.

13th. The water here arises from a plentiful spring. The day spent till six in the evening in putting a new axle to the waggon – which being finished we proceeded further a little to the Eastward of North thro’ the same sort of country, abounding with grass altho it was compleatly dried and withered by the excessive heat. We spent the night at a Fountain much frequented by Buffaloes.

[NOVEMBER] 14 Mr. Daniell and I with two of our party went on before the waggons in hopes of finding game along the road, we continued until we arrived at the water that had been described to us as the proper halting place. Having travelled 4 hours slowly on horseback we arrived a little after sunset, and expected the waggons to reach the place about 9 — in this hope we were sadly) disappointed, for at midnight there was no appearance of them, Such a circumstance being totally unexpected no precaution had beer taken in case of such an accident befalling us, suspecting that the waggons had lost the road over night, it was not very likely that by returning we should find them; therefore trusting that Mr. Truter would send in search of us, we spent a most uncomfortable night by such a fire as the scanty supply of fuel the spot afforded would allow — one was appointed to keep watch in case of a surprise of the Bosjiesmen whose fires we had seen around the preceeding evening.

Sunday 15th. At day break finding that no one joined us, I sent a person on horseback to look for the waggons with directions to return with some provision as speedily as possible, for the cold of the night now gave place to a more urgent sensation, that of Hunger, no one having ate since noon the day before. Some Harte beasts came to drink at the fountain, a shot was fired at them, which only frightened them away from us. About seven two men whom Mr.

Introduction and notes by Edna and Frank Bradlow
Dr Frank Bradlow was chairman of the Van Riebeeck Society for many years, and a well-known specialist in Africana. Dr Edna Bradlow taught at the University of Cape Town