Carl Peter Thunberg (1743-1828) is the Swedish master botanist, best known for his works Flora Japonica and Flora Capensis on plants of Japan and the Cape respectively. 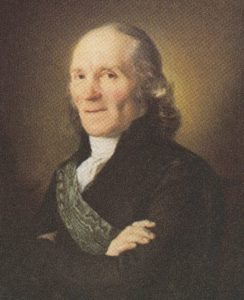 During his visit to the Cape, from April 1772 to March 1775, he undertook three journeys to the interior to collect plant and animal specimens for the Botanic Garden at Leiden. During these journeys he kept travel journals and field notes never published. When he returned to Sweden after his visits to the Cape and Asia he immersed himself in his studies and in drawing up scientific descriptions of plants and other organisms he had encountered or discovered. He had no desire to write a book about his travels at the Cape but, after repeated requests by collegues and friends, he decided to do so twelve years later. It stands to reason that he drew extensively upon the unaltered pages of his journals and field notes he never thought of ever publishing and now in Sweden there was no way in which he could check these stories. 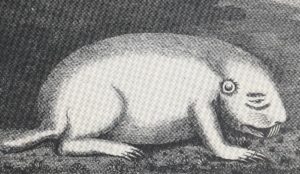 Carl Peter Thurnberg was born in 1743 in Jönköping, Sweden. At the age of 18, he entered Uppsala University where he was taught by Carl von Linné (Linnaeus), regarded as the “father of modern taxonomy”. Thunberg graduated in 1767 after six years of studying. To deepen his knowledge in botany, medicine and natural history, he was encouraged by Linnaeus in 1770 to travel to Amsterdam. There he met a Dutch bonanist who convinced him to the East Indies to collect plant and animal specimens for the botanic garden at Leiden and assisted him to enter the VOC as a surgeon on board the Schoonzicht. On his way to Batavia he arrived in the Cape in March 1772, to perfect his Dutch and ended up staying for a period of three years 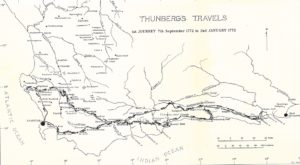 To view a high resolution copy of this map, click HERE

On the second journey, from September 1773 until January 1774, he travelled north again as far as mouth of the Breede River then east through the Oliphants River valley to Swellendam from where they continued east as far as the Sundays River.

This volume contains the English translation of Thurnberg’s book called Travels at the Cape of Good Hope 1772-1775 which was first published in two volumes in 1793 and 1795. It contains accounts of his three journeys into the interior, traveling further than any previous visitor from overseas. These journeys rightfully occupy the greater part of his account of his  visit to the Cape in his book about his travels but since the journeys occupied only about one third of the time that he spent at the Cape, he tells us what he had learnt of the laws, customs, occupations and modes of living of the colonists, slaves and indigenous peoples. 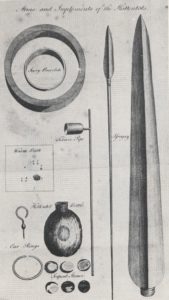 “Arms and Implements of the Hottentots”

In September 1772, accompanied by the superintendent of the Company Garden, Thunberg undertook the first journey that took them to the north of Saldanha Bay, east along the Breede River Valley through the Langkloof as far as the Gamtoos River and returning by way of the Little Karoo and the Overberg. To view a high resolution copy of this map, click HERE

The third journey in the last quarter of 1774 that Thunberg undertook took him and his party north through Piekenierskloof as far as the Hantams River and then back through the Tankwa and Roggeveld Karoo, past today’s Worcester, Tulbagh to reach Cape Town late in December. At the initiative from Linnaeus, Thurnberg graduated at Uppsala as Doctor of Medicine in absentia while he was in the Cape. On 2 March 1775 he sailed for Batavia from where he carried on to Japan.

……..to get honey out of them. For this purpose, they first tie a noose round the trunk, in which they put one foot, then they fasten another noose higher up, and when mounted in that untie the former, and so on.

Roads, that can be properly so called, are not to be found in all this southern part of Africa; yet the way which people in general take, when they travel, is pretty well beaten in the neighbourhood of the Cape; farther down in the country indeed, very often not the least vestige of a road appears. Therefore in plains that are either very extensive, or covered with bush, it may easily happen that a traveller shall lose his way; so that he ought to be well acquainted with, and accurately observe the marks, by which he may get into the right road again. He must see then whether there be any sheep’s dung in the fields, which shews that there is a farm-house in the vicinity; and likewise, whether he can discover any herds of cattle grazing, or any cultivated land.

The country here, in general, consisted of extensive plains, full of rich pasture, interspersed with hillocks, and valleys, that abounded in wood and water.

The trees in the woods were large and tall, but for the most part crooked and misshapen, and at the same time covered with moss, like those in the northern regions.

The Hottentot women here, wore a little sea-shell (Nerita histrio, and the Cypraea moneta) by way of ornament, both on their caps, and round their wrists, in the form of bracelets. Their cap is a slip of buffalo leather, of a hand’s breadth, without any crown, ornamented on the outside with these shells, in various rows, according to the different taste and wealth of the owner.

The Hottentots of this place had a custom, which is not general with this nation, of wearing a bag of leather, that hung by a strap over their shoulders, quite down on their hips. At the lower end it was ornamented with thongs of leather, like fringes, to which were tied shells, that made a rattling noise. This bag served to keep various articles in.

Other Hottentot women wore on their heads a striped conical cap, made of several narrow slips of black, white, and brown lamb-skins sewed together. These caps were also, sometimes, decorated with glass beads, fixed on them in various forms, or hanging down, like strings of pearls.

Round their arms and legs they generally wore rings of ox-hides, which I had here the opportunity of seeing made. The slips, cut from the hide were beaten till they were quite round, and both the ends stuck so fast together, that it could not be perceived where they were joined. These rings they afterwards forced over their feet, wearing, especially the women, such a number of them, as to cover half the leg, or more. I have also sometimes seen them wash, and afterwards grease these rings.

In the eggs of ostriches, as I was informed, a stone was sometimes found which was set, and used for buttons.

There are instances of an European’s having married a Hottentot Woman, who has then been baptized. But it has more frequently happened that a colonist, without regular marriage, has had several children by Hottentot mistress, and that these children have been baptized when the were several years old.

In many places I observed the land to have been set on fire for the purpose of clearing it; though in a very different manner from what is done in the north. Divers plains here, produce a very high sort of grass which being of too coarse a nature, and unfit food for cattle, is not consumed, and thus prevents fresh verdure from shooting up; not to mention that it harbours a great number of serpents and beasts of prey. Such a piece of land as this, therefore, is set on fire, to the end that new grass may sprint up from the roots. Now if any of these places were overgrown with bushes these latter were burned quite black, and left standing in this sooty condition for a great length of time afterwards, to my great vexation, as well as that of other travellers, who were obliged to pass through them.

Almost every day we were wet to the skin, in consequence of deluging showers of rain, which were sometimes accompanied with thunder…………..

Vernon S Forbes studied geology and mineralogy at the University of California and UCT and was awarded a PhD by the University of Rhodes in 1958 for his thesis sub-titled A Geographical Commentary upon Routes, Records, Observations and Opinions contained in Selected concerning Travel at the Cape, 1750-1800. He edited five volumes published by the VRS, including two on George Thomson, two on Anders Sparrmann and one on Carl Thurnburg. Forbes rendered distinguished service to the Department of Geology at Rhodes for thirty years as Lecturer, Senior Lecturer and Professor until his retirement in 1970. In recognition of an outstanding academic career in office and in retirement, Rhodes University awarded Forbes an Honorary Doctorate of Literature in 1989.

Translated from the Swedish by J and I Rudner

Jalmar Rudner, Swedish architect and town-planner, worked for the CapeTown City Council for 30 years, and on his retirement for the National Monuments Council as archaeologist. Ione Rudner (MA Natal) worked for the South African Museum for some 29 Years and in later years was editor in charge of publications. In their spare time the couple ran the archaeology department for 13 years, undertook numerous expeditions, research, and published extensively. They turned to historical studies, especially translating and editing the narratives of early Swedish travellers in southern Africa.