This volume contains the fascinating narrative by a 15-year-old Huguenot refugee who was a castaway among the Xhosa and his rescue with the survivors of the Stavenisse and the Good Hope who built a new boat, Centaurus, from the wreckage with which they sailed to the Cape.

The building of the Centaurus (by Nils Andersen)

Guillaume Chenu de Chalezac was a 15-year-old French boy who left France in 1686 at the insistance of his parents to escape the persecution of the Huguenots. The plan was to reach family in Holland or Germany. They secured a berth for their son on a ship sailing to Madeira from where they hoped he would find a returning vessel to take him to safety in Holland. When he reached Madeira, the authorities threatened to send him back to France. This forced him to approach the captain of an English ship, the Bauden which was due to sail to the East Indies.

During this voyage the captain and the pilot were killed in an encounter with pirates and the Bauden had to continue its voyage with nobody that “understood navigation” at the helm. When they saw their first land, after four months at sea, a small boat with eight men, including Chenu, was sent ashore in an attempt to obtain more reliable information about their position. Bad weather and a rocky coast line contributed to them reaching the shore in a wretched condition ten days after leaving the ship. According to a map included in this volume the yawl went ashore close to the mouth of the Great Kei River on the Eastern Coast. 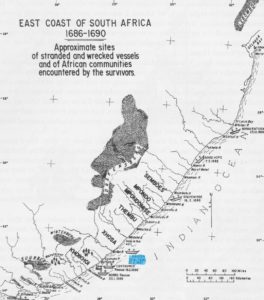 East coast of South Africa, 1686-90, showing sites of stranded/wrecked vessels, and of African communities met by the survivors

The castaways obtained some food from the friendly Xhosa people, but a scuffle developed when there was a misunderstanding that resulted in the death of Chenu’s comrades and he being seriously wounded. He was found lying on the beach and was carried by two black men to their huts where his wounds were dressed and gave him food and something to drink. Chenu went on to live in the household of a Xhosa chief for almost a year. The central theme of Chenu’s narrative is the way of life of the Xhosa-speaking people who took him in.  He eventually arrived back in the Cape with the Stavenisse survivors on the self-built vessel Centaurus in 1687.

Letter from Guillaume Chenu to King Frederick William I, 1718

Chenu went on to be in the service of the VOC at the Cape where Simon van der Stel identified him as a young refugee nobleman sought by the Princess of Orange. His return to a commission in the Prussian army completes his story.

EXTRACTS FROM THE TEXT

“While the roast is on the fire, they dance back and forth, vying with each other in their dancing.

When the meat is cooked, the bridegroom leaves the male company, removes from his head a kind of cap he wears and goes, dancing all the time, towards the group of women. He approaches his bride, kisses her and returns to his place. The girl follows him a short time later in the same style, and then returns to her company. This stratagem is carried out three times, and appears to have a likeness to the custom of the ancient Romans, who were required to tear their brides away from their mothers.

When the ox is roasted it is divided into two parts, one of which is given to the men and the other to the women, and each group eats it separated from the other.

After all these ceremonies, the bridegroom gives ten oxen to the father and the brothers of the woman, to whom he is then properly married. They can then consummate the marriage.

Before a man may marry, however, he must be circumcised. Circum­cision takes place between the age of 11 and 18. Normally 10 or 12 are circumcised together at one time. They must enter a river up to the waist. One of them comes out again in order to fetch others not far away, who are already circumcised but not yet married. This operation is carried out in a manner more cruel than among the Jews, and many die from it.

After this has been done, they are led on to a mountain where a hut has been built for them and there they are obliged to remain for three months without seeing any women. Food and drink are brought to them by their friends.

After the three months have passed, they are given a girdle of rushes, which they put round their bodies. They come down from the mountain, return to their homes and dance for a whole night. On one occasion curiosity drove me to watch this ceremony, but it nearly cost me dear. I was seized by two or three of the strongest, in order to perform the execution on me. I was never more frightened in my life and it was only after my threatening them that the king of the whites, whom they fear very much, would exterminate their whole nation that they left me alone. [….] ”

8. THE XHOSA WAY OF LIFE: FOOD AND DRINK -HUNTING – BELIEFS

“The most common staple food of these people is curdled milk. They also have a type of bread, which they make out of a sweet seed. This seed grows without their having to do more than scratch the soil a little, sow it, and soon a plant 10 to 12 feet high grows up, so excellent is the soil.

To make bread, they grind this grain between two stones, baking a cake of it under the ashes. It is good to eat, but the beer they brew is so bad that one has to be a Caffre to be able to drink it. They make it by using a seed like mustard, which they also grind between two stones, putting the ground meal in big earthenware pots. These they fill with water, which they boil for an hour, then let it settle for three days.

After making it, they invite their neighbours and drink until everything is emptied. This drink, which is their greatest delicacy, is extremely bitter, with a nasty taste, but it is as intoxicating as wine, of a kind that, when they part, they can scarcely stand up.

The country is full of small game of all kinds, especially hares, in such profusion that they can often be killed with sticks. When they catch some, they do not make a stew of them but just boil them, head and body, in water, and, without skinning them, when they are done they devour them, meat and hair together.

They eat no fish, however, either from the sea or the rivers, for they include snakes under the name of fish, and believe they will die if they eat them.

Sometimes they go on a lion or tiger hunt. These wild animals do great damage to their herds. When they find some of them, 300 or 400 people gather together, take four or five cattle with them and around the place where they have found a lion or tiger they make a kind of rampart with a large number of trees. They all sit down in this, holding with one hand an ox-hide shield and with the other a spear. They then drive the cattle in and when the tiger jumps out of the bushes and throws himself on to a beast some of the people run up and chase the tiger with loud shouts to frighten him. Closed in on all sides, he has to leap over the heads of the hunters. They have covered these with their shields and with the other hand they thrust their spears into the belly of the tiger as he jumps over them.

I have often watched this hunting, but the first time it nearly turned out badly for me. I was sitting in exactly the place where the tiger jumped over, and as I had no shield as a protection, he scratched my head with his claws, wounding me and leaving scars which I shall carry for the rest of my life. With his leap, he also knocked me over and escaped. I was much more careful on future occasions.

Although it is said of the Caffres that they live without religion, never­theless its seems they once had beliefs. I saw them make shrines and on certain days kill a beast, almost as if making a sacrifice, giving half to the dogs and burning the other half. Meanwhile the whole group would stand round the fire in deep silence, until their offering (if they gave it such a name) was consumed. When I asked them the reasons for doing what they did, they replied that they knew of none, but that they simply did what their brothers had always done. [….] “

Edited by Randolph Vigne
Randolph Vigne, a publisher and editor, has written much on southern African and European themes, including, in particular, the Huguenot diaspora.