Hendrik Swellengrebel in Africa. Journals of Three Journeys in 1776-1777

Hendrik Swellengrebel in Africa. Journals of Three Journeys in 1776-1777 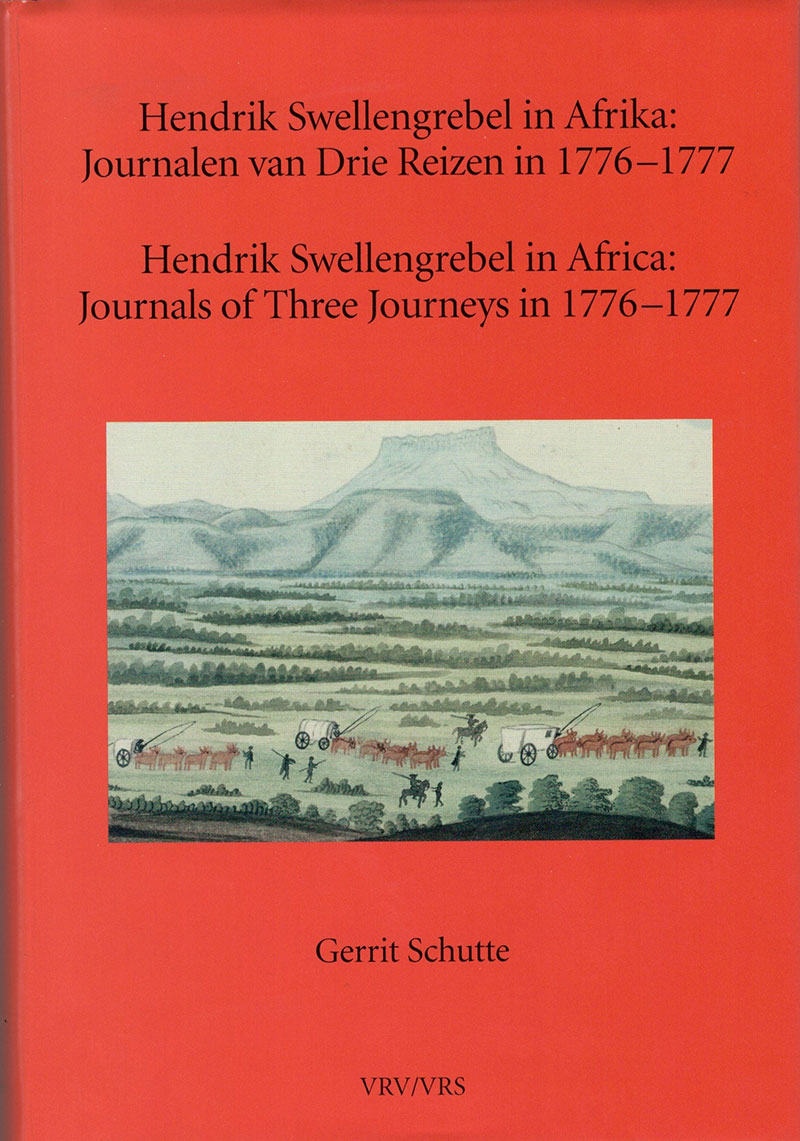 Hendrik Swellengrebel Jnr was born at the Cape on 26 November 1734, the fifth child of Hendrik Swellengrebel Snr, at the time the Secretary of the Council of Policy, but from 1739 Governor of the Cape of Good Hope, and of Helena Wilhelmina ten Damme. After bidding farewell to his parents on 25 March 1746, Hendrik Jr travelled as an eleven-year-old boy to the Netherlands with the return fleet.

Already then, his father intended to return to the Netherlands eventually. He had four sons and three daughters – what future did the Cape offer those children? So, he sent his sons to the Netherlands to further their studies. After their arrival there, they were taken care of by Rev. J. Schermer and his wife in Utrecht. Hendrik Jnr attended the Latin school and afterwards read law at Utrecht University. Not yet 21 years old, he completed his studies in 1755 and after that established himself as an attorney and also became a canon in the chapter at the Cathedral.

In 1760, when his father died, Hendrik Jr, unmarried and 26 years of age, inherited the property Schoonoort in Doorn. The property comprised a Manor house “with its stables, coach house, gaming house and further wooden structures, Gardens, Orchards, ponds, Avenues, Forests….”  as well as the pew in the church in Doorn.  Thus, Hendrik Swellengrebel began his life as a country nobleman, regent and gentleman farmer but he also kept a residence in Utrecht. He had to attend the meetings of the Cathedral chapter and, by virtue of being its regent, also meetings of an old-age home, an orphanage, an alms-house and a house for students of the Latin school. But he continued to add to his properties in Doorn as the years went by. With the possession of these residences and farms, Hendrik Swellengrebel became the largest payer of hearth taxes in Doorn. His estates were eventually more than 300 morgen in size.

In 1775 Hendrik Swellengrebel embarked on the VOC ship Alkemade, to pay a visit to the land of his birth, at that time no ordinary undertaking. The reasons for this visit were never explicitly revealed by him so far as is known. Certainly, a desire to see his country of birth again played a role in this. Yet, it is not impossible that he also toyed with the idea of establishing himself at the Cape. His interest in the possibilities – including financial ones – offered by farming there, evident in his travel accounts and in his exchange of letters in the years thereafter, point in this direction.

Swellengrebel had resolved to traverse the Cape in all directions to acquaint himself with the state of the colony, the nature and impact of the VOC administration and the lifestyle of the colonists. But he wanted to become acquainted too with indigenous Khoi, San and even Xhosa, and therefore also wanted to visit the territory of the latter, which he referred to as ‘Kafferland’. He prepared himself thoroughly for this. He ordered maps from the Amsterdam firm Van Keulen and bought a chest of books for preparatory study while travelling to the Cape on the Alkemade.

Hendrik Swellengrebel was part of a wave of new research scientists. He too wanted to know what the facts were behind the stories on circumcision and semi-castration among Khoi men and the unique labia of the women (the so-called ‘Hottentot apron’), the customs about twins, the end of life of old people and funerals. As his Journals contain many precise observations of (Gonaqua-) Khoi and Xhosa, Swellengrebel must have had knowledge of the discussion that the well-known anatomist from Groningen, Petrus Camper, and others had about the Great Chain of Being and the different opinions on the origin of races. He also knew that several Capetonians, including his cousin, Hendrik le Sueur, had provided Camper with material for zoos and dissecting tables. Swellengrebel himself took the foetus of an ant-eater to the Netherlands, along with many specimens of South African flora. 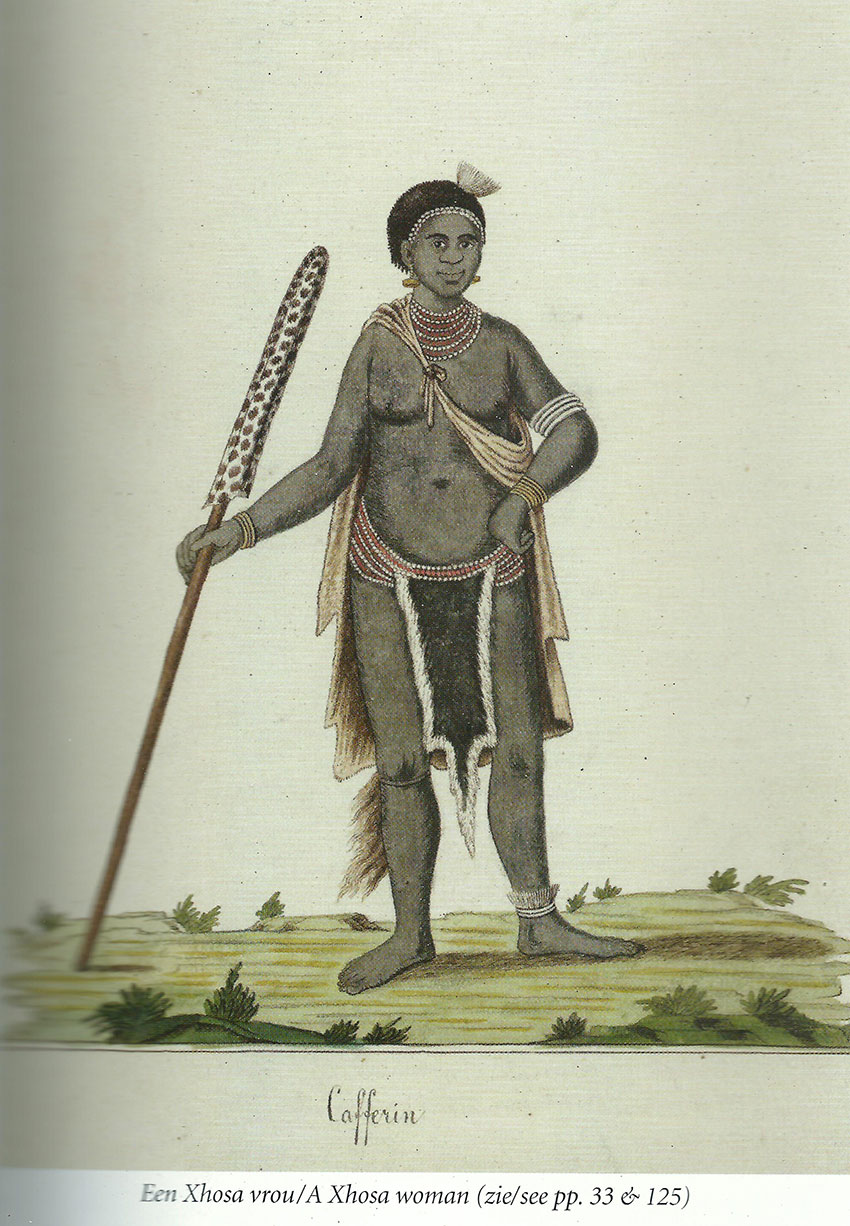 Swellengrebel began his stay at the Cape by doing his friends back home a favour: delivering the letters he had been given by them to local addressees. He started walking, ‘specifically behind Lion’s head’ and in the direction of Hout Bay, up to ‘the flagman’s House in the nek between Table Mountain and Lion’s head’. And he spoke to old and new acquaintances. To start with, he questioned his le Sueur cousins: J.J. was cashier of the VOC, P.L. the Company’s warehouse master and H. a physician. Governor Van Plettenberg (who lived in Hendrik’s parental home) was an old university friend, and he became good friends with the fiscal W.C. Boers and the dispenser Adriaan van Schoor. R.J. Gordon he did not meet – the latter was in the Netherlands and arrived back at the Cape only on 1 June 1777. It might well be that he met the Swede Anders Sparrman, who returned to Cape Town on 15 April 1776 after a journey of nine months through the interior and left the Cape shortly thereafter, but there is no evidence of such personal contact.

He did meet Hendrik Cloete, gentleman farmer at Nooitgedacht and former heemraad of Stellenbosch. Cloete would purchase Groot Constantia in 1778. He was quite a personality and his success turned him into the subject of jealousy. The Frenchman François le Vaillant, who stayed at the Cape from 1781-1785, wrote, for example, that Cloete poured himself a better wine than he did for his guests. Swellengrebel took Cloete’s side: ‘I have noticed myself that the Owner regularly drank other wine than he had poured for his Housewife, me and other guests, yet that special wine for him was far removed from Bordeaux wine, but a sourish wine that he drank for his health, just like we would drink a light Moselle wine here.’

Hendrik Cloete, acquainted with many Cape people, relations and developments, was a good guide to familiarise Swellengrebel with Cape society and places. For instance, together they rode to Simonsberg and the silvermine shafts that had been dug in 1743-1744, an operation   in which Governor Swellengrebel had been closely involved.  Cloete also had his son, Pieter, and his servant, Swanepoel, accompany Swellengrebel during his travels.

Companions during his journeys.

On his travels Swellengrebel was accompanied not only by local servants and guides but he appreciated too the presence of a few Europeans, and not only for their companionship, but in order not to “rely on the care of old Swanepoel [his guide] or the Hottentots in case of sickness if I had something dangerous; moreover, I experienced how unpleasant it is to keep one’s findings and observations only to oneself.” His companions on his extensive overland trip included Pieter Cloete, the son of Hendrik Cloete, then only 21 years old, the master surgeon Solon van Haght, Johannes Swanepoel a true “grensboer”, two wagon riders, a draughtsman, a cook, a manservant and eight Khoikhoi, along with seven horses, 24 dogs and 58 oxen. When the Fish River was crossed, the company was reinforced by several “Grensboeren” and their Khoi servants, so that it then consisted of 18 Europeans, 21 Khoikhoi and those whom Swellengrebel called ‘Bastard-Kaffers’, 23 horses and 78 oxen, three ox wagons and two carts. 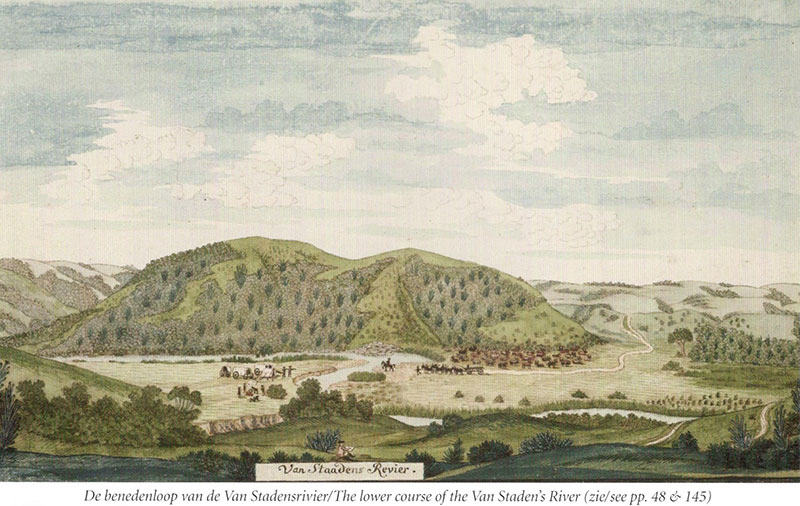 He was also accompanied by a draughtsman, the name of whom is not mentioned anywhere in the Journal. But two of the more than 60 drawings that illustrate Swellengrebel’s Journals are signed ‘Johannes Schumacher’. Johannes Schumacher was a soldier who belonged to a company under the colonels Hendrik van Prehn and later R.J. Gordon. Whether Schumacher had any artistic training is not known, nor are there any known paintings of his dating from before 1776. Nevertheless, he must have been known as an artist, otherwise Swellengrebel would not have employed him as a travel companion. Schumacher was described by François Masson in 1786 as “an artist of great skill as a recorder of the objects of natural history.” This praise is confirmed by the quality of the drawings in the Swellengrebel collection, which, in view of their captions and dates, must almost all be by Schumacher

Swellengrebel travelled into the interior three times. The first journey (18 to 31 July 1776) was to the West coast, to the bays of Saldanha and St. Helena. The second journey lasted much longer (10 September to 27 December 1776) and took him through the less well-known and sparsely populated parts of the colony, even across the frontier: through Drakenstein and Graaff-Reinet to the Fish River, across the river into what was then known to colonists as “Kafferland” and back along the southern coast. The third journey (12 to 29 January 1777) went up north, to the Heerenlogement Mountains and the district of the Twenty-Four Rivers.

In this volume Swellengrebel’s journals of his three journeys are published for the first time in their entirety in the original Dutch and in an English translation too, together with an introduction and annotations. They provide an image of the Cape Colony often quite different from that provided by a variety of other travellers of the same time period. Swellengrebel even wrote very critical ‘Notes’ on Le Vaillant’s Voyages … dans l’intérieur de l’Afrique and played an important advisory role in the years of the Cape Patriots movement in the last decades of the VOC administration at the Cape. (Swellengrebel’s critique mentioned on pages vi and viii of the Swellengrebel volume will be uploaded to the HiPSA website later.)

On 15 February 1777 the Council of Policy granted Hendrik Swellengrebel permission for him, his domestic servant and three chests of goods to go aboard the VOC aft-decked ship Delfshaven. The Delfshaven left only on 7 March and reached Texel on 19 June 1777, whereafter Swellengrebel returned to the life of a country gentleman, but one who kept in regular contact with people and events in the land of his birth. For details of this contact see two earlier VRS volumes edited by Professor Schutte, Briefwisseling van Hendrik Swellengrebel Jr oor Kaapse Sake 1779-1792 (1982) and Hendrik Cloete, Groot Constantia en die VOC, 1778-1799 (2003).

Gerrit Schutte is a graduate of the University of Utrecht and was professor of the History of Dutch Protestantism at the Free University in Amsterdam. He is still Professor Extraordinarius in the Department of History at the University of South Africa. He has published studies and edited sources on the socio-cultural history of the Netherlands, the VOC and South Africa. The VRS has previously published his “Briefwisseling van Hendrik Swellengrebel Jr oor Kaapse Sake 1779-1792” (1983) and his “Hendrik Cloete, Groot Constantia en die VOC, 1788-1799” (2003). Recently he contributed three chapters to “Die VOC en die Kaap 1652-1795” (2016)