Into the hitherto Unknown. Ensign Beutler’s Expedition to the Eastern Cape, 1752

Into the hitherto Unknown. Ensign Beutler’s Expedition to the Eastern Cape, 1752 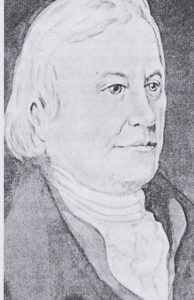 In February 1751 Rijk Tulbagh became Governor of the Dutch colony at the Cape after serving many years as the Secretary to the Council of Justice. Having arrived in the Cape in 1716 barely seventeen years old, he became passionately interested in every aspect of his adoptive land, its geography, botany and its peoples. One of the first things he did after he became Governor was to appoint an expedition “to obtain a thorough knowledge of the hitherto unknown condition of these interior lands and peoples”. The expedition, under the command of Ensign August Frederik Beutler, comprising of 71 persons, was exhorted to gather all possible information on the country’s natural resources, commercial potential, as well as the customs and attitudes of its indigenous peoples. They left the Castle at the end of February 1752 with instructions to follow the well-established route to the vicinity of Mossel Bay and from there “through the most suitable places.” The instructions, most probably drawn up by Governor Tulbagh himself, laid considerable emphasis on the importance of scientific accuracy. “… a mere description of the countries, peoples and all other incidental matters would not lead to much progress without any good geographical and astronomical observation also being made…”. To this end, the normal military personnel of the expedition was augmented by Carl Haupt, tasked to keep a journal, a surveyor a cartographer as well as an official tasked with taking astronomical and compass readings.

The lands beyond Mossel Bay were officially unknown, entered only by illegal hunting and trading parties which had every reason to keep their activities secret. The expedition penetrated beyond the Kei River as far as the present-day Butterworth, before turning back frustrated, but it took more than fifty years before the next Cape traveller ventured even that far.

The Beutler Journal is the very earliest written account of the eastern Cape in the eighteenth century to come down to us. Before Beutler, there is only the account of the wreck of the Stavenisse in 1688 (see HiPSA Vol II-22 The French Boy) which means that it is almost the only voice we hear in nearly a century of silence. 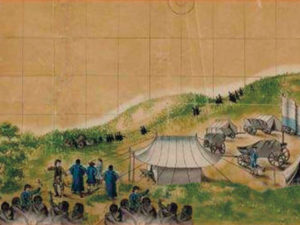 Beutler’s expedition arrived back in November 1752 after of almost nine months but, in the words of Governor Tulbagh, “… without having discovered anything remarkablke during their march, or penetrating further than to a people called the Tambookies, a tribe occasionally visited by our elephant hunters…..”  The chief objective in his view has thus been defeated namely to “acquire a correct knowledge of the interior – and of the inhabitants, and to ascertain whether any trade profitable to the company may be there prosecuted.”

Despite the failure of the expedition the journal illuminates our understanding of the precolonial Eastern Cape like a comet lighting up the night sky. The reader will meet not only the fauna and flora of the region, but the Khoikhoi, Xhosa, Thembu and Oeswana San (‘Chinese Hottentots’) . This edition comprises both the original Dutch text (last published in 1922) and the first-ever English translation. 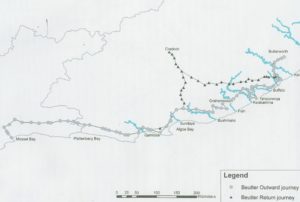 Map of Beutler’s expedition to the Eastern Cape 1752: Revised co-ordinates.

For more information about the expedition’s daily travels presented as the date and the distance in miles travelled in a specific direction to arrive at a place whose co–ordinates are given, as well as a summary of the observed co-ordinates please clik here

Thea Toussaint van Hove was born in 1916 in The Hague, The Netherlands. After matriculating from the Classics section of Het Nederlandsch Lyceum, she went to Leiden University where she obtained a Master of Law degree in 1940. Thereafter she worked in the legal department of the Directorate of Price Control in Amsterdam (simultaneously being active in the Dutch Resistance) and after the war as a free-lance journalist. In 1948 she moved with her family to South Africa and was employed by the National Institute for Crime Prevention and Reintegration of Offenders (NICRO). During this time she studied for a BA degree in Sociology and Psychology at the University of South Africa and was later awarded a PhD in Sociology by the University of Stellenbosch. She retired from NICRO in 1986, having attained the position of Assistant National Director; and from 1987 to 1996 worked as a voluntary research assistant in the Archaeology Department of the South African Museum, Cape Town.

Michael Lewis Wilson was born in 1933 in Umtali, Southern Rhodesia, now Mutare, Zimbabwe. He was educated at St Aidan’s Preparatory School and College, Grahamstown, and, after matriculating, spent some two decades in the commercial world. Deciding to further his education, he obtained a BA degree at the University of Cape Town in 1974, majoring in Greek and Archaeology. After a year of temporary employment in the Archaeology Department of the South African Museum, Cape Town, he studied for the BA (Honours) degree at the University of Stellenbosch, this being awarded cum laude. Thereafter he was made a permanent member of the Archaeology Department in the South African Museum’s Human Sciences Division until his retirement in 1996, having obtained his MA in Archaeology from the University of Cape Town in 1990. His research centred on the archaeology and early history of the San and Khoikhoi. He passed away on 9 September 2011.

Hazel Crampton is the author of The Sunburnt Queen (2004), a non-fiction account of castaways on the Wild Coast, nominated for the Alan Paton Award in 2005 and now in its 7th reprint. A Fine Arts graduate, she worked for many years in the film industry, and currently teaches in the Masters programme in Creative Writing at Rhodes University, Grahamstown. Her current work in progress includes a book on ancient southern African trade routes.

Jeff Peires is the author of The House of Phalo: A History of the Xhosa People in the Days of their Independence (1981) and The Dead Will Arise: Nongqawuse and the Great Xhosa Cattle-Killing of 1856–7 (1989). After six years as Head of the History Department at the University of Transkei, he was elected to the National Assembly in 1994, following which he worked for the Eastern Cape Provincial Government in Queenstown, Tsolo/Qumbu and Bhisho. He took early retirement at the end of 2006, and is currently working on a history of the Eastern Cape.

Carl Vernon is a biologist who has been associated with natural history museums for over fifty years. In 1976 he joined the East London Museum where he was able to pursue his diverse natural history interests. Retiring from the Museum in 2003 to his home at Bonza Bay, he has continued his field studies of the fauna and flora. His long-standing interest in the historical landscape of the Eastern Cape led to his participation in the Beutler project.