Jan van Riebeeck was born on 21 April 1619. He was descended from a prominent old family from the region of Culemborg, where the three provinces South Holland, Utrecht and Gelderland converged.

His father, Anthony, had by way of a surgeon’s qualification entered paid service with the Dutch East India Company, without having to begin his career on the lowest rungs as a soldier or sailor.

It is probable that Jan also believed that this would be an appropriate way of beginning his own career, and after completing his school education he qualified as a surgeon. After completing his examinations and had been admitted to the surgeon’s guild, he obtained a post as assistant surgeon in the Company. In 1639, two days before his 20th birthday, he departed on his first long voyage to the East. He initially worked in Batavia as an assistant surgeon, but shortly after that he joined the administrative service, where he saw better career possibilities.

In 1642 van Riebeeck was promoted to the position of assistant buyer. He took part in various trade expeditions and was later further promoted to head of the trading post at Tonkin in Vietnam. He was recalled in 1648 when it came to light that he was guilty of illegal private trade. On his return to Holland, he was forced to resign from the Company’s service. 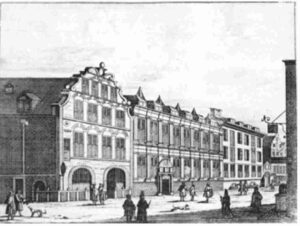 Van Riebeeck nevertheless still hankered to return to the East Indies and in 1651 he got his chance when the Company sought someone to establish a refreshment station at the Cape of Good Hope.

In December of that year, he departed from Amsterdam on his flagship, the Drommedaris, and with two other vessels, the Reiger and the Goede Hoop, sailed for the southern point of Africa. He stayed there for ten years before being sent to Batavia where he became Secretary of the Council of East India. Van Riebeeck died in Batavia in 1677. 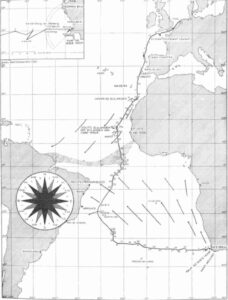 Route from Texel (Amsterdam) to the Cape