This publication contains two journals covering two journeys by Olof Bergh to the North along the Cape West Coast as far as Namaqualand in 1682 and 1683. Also included is the journal of Isaac Schrijver’s expedition to the East in search of the Inqua Hottentots to trade cattle. This journey took place in 1689 into the Great Karoo as far as the Camdeboo. 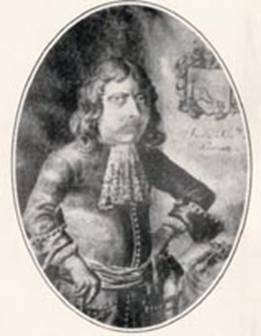 Portrait of Ensign Olof Bergh in 1685

Olof Bergh, a Swede from Gothenburg, born in about 1643 into an aristocratic family, arrived in the Cape in 1676. Before his first journey along the West Coast he undertook a number of bartering trips to the Overberg and to salvage the English ship Joanna that had run aground at Danger Point.

The purpose of Bergh’s journeys to the North was to negotiate and trade with the ‘Hottentots’ and to familiarise himself with the region up the Cape west coast. The first journey took him and his party as far as the Groen River close to today’s Garies. On the second journey they again could not get over the Kamiesberg and turned back at almost the same spot as they did during the first journey. 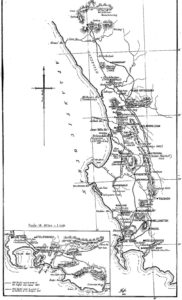 Map of the journeys of Olof Bergh.

The editor, Dr Mossop, includes in the Foreword of the publication the fascinating story of how Bergh was arrested in 1687 because he stole valuable items from wrecks which he was sent to salvage by the Cape Government. He was sent to Robben Island and was detained for more than four years until a letter from Holland instructed the Cape Governor to release him. He, with his family, went to Ceylon but returned to the Cape in 1695 with such a good record of service that he was appointed Captain of the Garrison and later to the Council of Policy, a position that he had occupied before his arrest.

Ensign Isaq Schrijver of Leiden was, like Bergh, a capable officer who was used by the Government to lead exploration and cattle bartering expeditions. His most unusual quest was a search for runaway slaves being sheltered by Hottentots who inhabited the Sandveld near Piketberg. Governor Simon van der Stel gave him instructions to procure the return of these slaves or “in the most civil manner…., without employing any bloodshed, to obtain a Hottentot Captain or some of their women and children as hostages.” 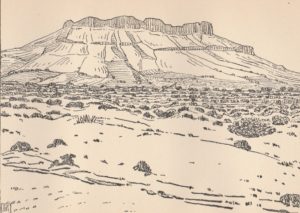 In December 1686 Schrijver was appointed as leader of an expedition to find and trade for cattle with the Inqua Hottentots, whose country was reportedly “overflowing with oxen, cows and sheep.” Schrijver succeeded in his quest and on the forty-sixth day from the Castle met the Inqua Captain named Hijkon. The three months’ journey to the Camdeboo (close to today’s Aberdeen) and back took the expedition on a route that passes close to the present Caledon, Swellendam, Heidelberg, Oudtshoorn and then over the Swartberg to the Great Karoo. Their route followed along the banks of the Kariega River to the section of the Camdeboo mountains which they called “Vervallen Casteel”. The Inqua stronghold is thought to have been hidden up a kloof in the Camdeboo Moutains about 25 kilometers north-northeast of present-day Aberdeen. 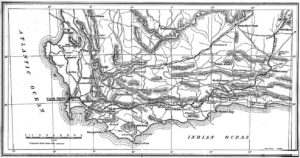 They obtained by barter more than 500 cattle and a flock of sheep. On their journey back they were attacked by another Hottentot tribe trying to steal their cattle. They decided to loose off a salvo and by doing that, killed thirty of them. The party arrived back at the Cape on 10 April 1689.

Transcribed, translated into English and edited with a foreword and footnotes by Dr E.E. Mossop.
(Author of Old Cape Highways)