Lichtenstein, Henry – Travels in Southern Africa in the years 1803 – 1806; by Henry Lichtenstein: Vol I

Lichtenstein, Henry – Travels in Southern Africa in the years 1803 – 1806; by Henry Lichtenstein: Vol I 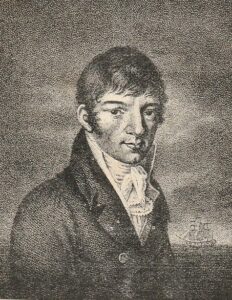 Dr. Martin Karel Heinrich (Henry) Lichtenstein was a German doctor who travelled widely through the Cape, commenting on the landscape, economy and the people whom he encountered. He arrived in the Cape during the time when the Cape was governed by the Batavian Republic. When General Jansens was appointed Governor of the Cape by the goverment of the Batavian Replublic Dr Lichtenstein, already an ardent naturalist, offered his services as medical attendant to the household of Janssens, and as tutor to his son. In due course, the appointed Governor and his family, including the young doctor set out for the Cape arriving in Table Bay on 23 December 1802. On the left a Man and Woman of the Tribe of the “Koossas”.  On the right Weapons, Ornaments and Houshold Implements of the Koossas.

In the second volume Lichtenstein returned to Cape Town via Graaff Reinet and the Karroo. His last journey took him north to Kuruman where he encountered the Koranna and the Bechuana. An appendix discusses the language of the ‘wild Hottentot tribes’.

On his return to Cape Town, Lichtenstein was appointed medical officer to the “Battalion of Hottentot Light Infantry” and in 1805 was sent as Government Commissioner to the Bechuanas. 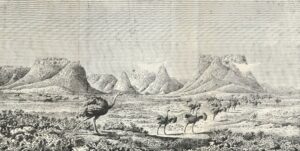 A View of the Karree Mountains with Ostriches and Quaggas

This volume covers his first journey in 1803, to the western and northern parts of the colony, to Saldanha Bay, the Bokkeveld and into the Great Karroo. From there he visited Swellendam and travelled along the southern coast to Algoa Bay. The volume concludes with his encounter with African people as far east as the Fish River. An appendix to the first volume discusses the Xhosa language.

Upon the cession of the Cape to the English in 1806 he returned to Germany where in 1811 he was appointed Prof of Zoology at Berlin University. Two years later he became Director of the Zoological museum and was the founder of the Zoological Gardens in Berlin.

The present work published in Berlin in two volumes appeared during 1810 and 1812 and an English translation, also on two volumes, was issued in 1812 and 1815.

[…] them, contrary to all sense and reason, often come to a formidable height, and end in hectic complaints, Which prove fatal. The stone is here a much too common complaint among the men: this is perhaps to be ascribed in great measure to the bad water, and the want of spirituous liquors. In those districts where vines are cultivated, and good wine is made, or where wine is to be had cheap, the evil does not exist. There is another disease which is not very frequent among the white people, but when they are afflicted with it from their total ignorance of the manner in which it ought to be treated, it commonly gets to a formidable height. It is much more frequent among the Hottentots, but what is extraordinary, is not so manifestly destructive to them.

Notwithstanding that our stock of medicines was very ample, yet it would soon have been exhausted, if I had administered to the wants of every body that came to consult me. I therefore found it expedient to make myself acquainted with the properties of such medical plants as grew in the neighbourhood, and had recourse to them in most instances, since otherwise we should have been left without resources, in case of any of our own party being sick. By the advice of a friend in the Cape Town, I carried with me a stock of Halle medicines, in which he told me the colonists placed confidence, and that it was not easy to make a more acceptable present than a glass of pulvis asmodicus, or essentia dulcis. As I did not, however, place equal confidence in these medicines, I re to give them as specifics in cases of real disease: I only availed myself of them occasionally when I ed to make some little return for civilities received, or when I was for any other reason desirous of obliging. Through the medium of my medicinal knowledge, I acquired myself many friends among the colonists, and ~y subsequent travels through these countries I ~i the readiness I had always shewn upon this ion to give my assistance wherever it was wanted y repaid by a thousand little courtesies, and by universal esteem and regard with which I was received. One inconvenience I experienced from it, many an hour was by this means lost to me, which I wished to have been able to devote to other pursuits. It occasioned me, besides, to have much less time for ~e than any of my companions, since, from the number of patients I had to attend to, it often happened no other opportunities remained for me to make my excursions in quest of the treasures I was always desirous of obtaining, except the hours which should been devoted to rest.