Louis Johannes Trigardt was a farmer in the Cape Colony’s eastern frontier. Shunning colonial authority, he emigrated in 1834 to live among the Xhosa across the native reserve frontier.

In year 1836 two small companies of boer families set out from the colony. They were the pathfinders of the greater movement that followed in their wake.  These two family-groups, Trigardt, and that of his fellow trekker Johannes (Hans) van Rensburg composed of seven Boer farmers, with their wives and thirty-four children & native servants, into the uncharted interior of South Africa, and settled for a year at the base of the Zoutpansberg.

Trigardt and Van Rensburg parted ways, after Trigardt argued that Van Rensburg was expending his ammunition excessively in his pursuit of ivory. Van Rensburg would not be seen again; he and his trek of forty-nine persons were killed in June 1836 by a troop of Tsonga after a night-long assault. 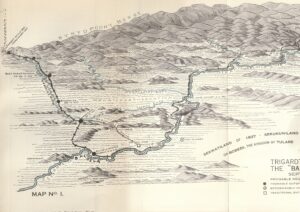 This volume based on Trigardt’s dairy starts in August 1836 while still in the Zoutpansberg and ends in May 1838 in Delagoa Bay. Trigardt was the only Voortrekker leader to keep a diary of his trek which is a valuable document in terms of linguistics and ethnology, besides his observations on the weather patterns, geography and the wildlife of the interior.

The climate and grazing in the Delagoa Bay area was found to be unfavorable for a long term stay, and Trigardt dispatched a servant to Natal to request an evacuation by sea but before this could happen he succumbed to malaria. In November 1836 Trigardt moved his camp eastwards to more agreeable climes in the vicinity of the later Louis Trichardt town. His party was to stay here until June 1837, in which time they built rudimentary houses, a workshop and a school for the twenty-one children.  Later the same year they departed from the Zoutpansberg to find a new home or trading route to the sea. He was resolute in crossing the mountains, even if the wagons had to be dismantled and transported piecewise.

His limited communications with the Portuguese indicated that they would be welcomed, and that the east coast was sparsely populated where they can settle. 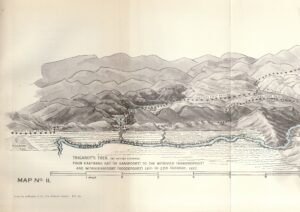 Where Trigardt came down the Drakensberg