This is the second part of the first volume of “Beschreibung des Vorgebirges der Guten Hoffnung” (Chapters X-XIX) published by O.F. Mentzel in 1785.

“A complete and authentic geographical and topographical description of the famous and (all things considered) remarkable African Cape of Good Hope” by O.F Mentzel published 1785.

Otto Frederick Mentzel, the son of a medical doctor, was born in Berlin in 1710. He was well educated and as a young man served in the army of the King of Prussia. He came to the Cape as a soldier, although his education was above that of the average common soldier who enlisted in the Dutch East India Company. We do not know the reasons why, nor the circumstances under which, Mentzel entered the Company’s service. Perhaps the glamour of the East fascinated him.

He arrived in the Cape in 1732 or 1733 and when he first met Captain Allemann, Commander of the Military Forces, he tells his readers, he was very hard up. Allemann patronised him almost almost from the start, as soon as he had heard that this humble soldier was a fellow Prussian. Very soon Mentzel became the tutor of Allemann’s children. Mentzel had the proper disposition for making friends; he was courteous and obliging, and, judging from the many stories and anecdotes in his writings, he must have been an entertaining conversationalist. Mentzel left the Cape unintentionally at the beginning of January 1741. He boarded a ship that was anchored in Table Bay to deliver letters to be posted in Holland for his family and friends in Germany. Due to a misunderstanding he could not get back to shore before the ship lifted anchor and was on its way to Europe. Mentzel never came back to the Cape after this unplanned departure. 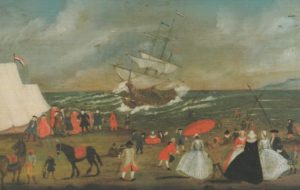 The second part of Mentzel’s account of life at the Cape ranges widely, from revenues available to the Cape government, to the daily life of the burghers, public auctions and the treatment of slaves. He elaborates in detail on how leases for the selling of Cape wine and brandy, the supply of meat and other commodities to the government are auctioned and sold to the highest bidder. He also describes the social lives of the various classes of society, from formal dinners arranged by the gentry and dance and drinking parties by the commoners. What is very clear is that Mentzel met and talked to all sorts of people, farmers, burgers and officials, poor men as well as rich men, and that he had the proper disposition to make friends. When he comments on the treatment of slaves he vividly describes how punishments were administered and how executions took place.

104 Description of the Cape

[…] and wild-fowl that had been prepared in Holland. Incredible is it not? But quite true. The method of preparation is as follows: A fat joint is selected and well rubbed in with a mixture of salt, ground cloves and pepper. On the following day it is put into an iron pot and allowed to stew in its own fat over a peat fire. When the fat has fully dissolved, the meat should be transferred to an earthenware pot and sufficient melted fat thrown over it to cover it completely. This is most important, for the layer of fat keeps out the air and prevents decay. The chief cause of putrefaction in meat is due to exposure to the air. Game is similarly treated, but should be fried in butter, in quantities sufficient to Cover the bird. When so prepared, it will keep for months. All that is needed to make it fit for the table is to warm it up in its own fat. In flavour, there would be little to choose between the preserved and fresh-roasted game.

The principal occasions on which big parties are given are weddings. The feast takes place at the residence of the bride’s parents, who spare no pains to deck their tables with everything that money can buy. The reception is naturally in keeping with the wealth and station of the parties con­cerned. Long tables are placed in the guest room, round which about twenty-four men are seated, for the women gather in an adjoining room and are served separately. The huge tables are so loaded with eatables as to leave no room for another plate. There is an abundant supply of local dishes, stewed and roasted meats, boiled and fried fish, pastries and sweetmeats, prepared in a variety of ways, and also a good supply of imported smoked and corned meats. Since the latter are rarely seen on the every-day dinner-table it stands to reason that they whet one’s appetite. The result is that the spiced and seasoned meats are eagerly consumed, whereas the fresh foods are scarcely touched; for no man can eat more than to repletion.

In the eighth chapter of the third book of Kolbe’s “Caput Bonae Spei” the author has given an extremely tedious and prolix account of the life and manners of the inhabitants at the Cape; he talks of visits and parties; marriages, baptisms and burials; schools and slaves, in such a muddled manner that the reader can gather neither information nor amusement. It seems to me that the only purpose he serves thereby is to add some pages to the bulk of his volume. I do not intend to follow Herr Kolbe’s footsteps. I shall content myself with giving a brief but accurate statement of what I have seen concerning these matters and avoid all flourishes and circumlocution.

There is no rigid social code for the male section of the population. Men do not pay each other compliments or make ceremonial calls. Friends visit each other without previous appointments, but no one of inferior rank will venture to visit a superior unless on pressing business; the bookkeeper will not pay a social call upon an upper merchant, nor a clerk upon an under-merchant. When the object of the visit is some pressing business, all that is necessary is for the visitor to give his name to the slave at the door and he will be admitted forthwith. As soon as his business is finished, he ought to take his leave unless the host invites him to smoke a pipe with him. Sometimes an invitation follows to take a hand at L’Ombre or Gravejas: such an invitation must not be declined.

Wedding parties are very mixed affairs; higher and subordinate officials as well as common burghers meet on the same plane. All are regarded as welcome guests of the host and all distinction of person is overlooked. I have seen at a wedding a merchant’s daughter dance with a burgher’s son, and, more frequently, sons of members of the honourable Council will dance with the daughters of plain townsmen. Due deference is, in fact, shown by well-brought up persons to rank and position, but what really matters is that men of quality do not take up a supercilious attitude to their social inferiors when they are brought together occasionally under one roof. More striking is, perhaps, the fact that girls of the best families will, before their marriage, be intimate with respectable girls of much more lowly origin.

Friends visit one another without ceremony. If, as some­times happens, the host is out, a pleasant time may be spent in the company of his wife and children. A pipe and a dish of tea will be offered as a matter of course; a glass of wine follows. Should the visit come at a time when the host has important business to attend to, it would be very boorish to remain, but if the occasion is timely, a few nearby acquaintances would be called in, and all would indulge in that most popular pastime, the Dutch game of Gravejas. I must take exception to the Abbé de La Caille’s statement that men usually spend the evenings between the hours of 5 and 9 smoking, drinking, and playing games at public places of entertainment. I do not intend in the least to cast any aspersions on the Abbé’s character; I do not doubt his veracity. For all I know he may have been a charming man. He spoke, no doubt, from experience, but—his experience was limited. His host, Mijnheer Bestbier, may not have entertained much at his own house. Besides, the Abbé, as a Frenchman, was seriously handicapped by his very limited acquaintance with the Dutch language, and there were few who understood his own. The fine manners and the studied […]