The four missionary texts which make up this volume reveal the little-known range of Moravian mission work in the Eastern Cape, from its inception in 1828 to 1928.

Vivid and subjective in character, they illuminate this lesser-known field of Moravian mission activity in South Africa, which extended to the Xhosa the pioneering work done at Genadendal and its family of stations in the Eastern Cape.

The narratives paint a graphic picture of the commitment of the missionaries and their families, the successes and failures of their evangelical mission work and provide rare insights into the thinking and conduct of those who converted to Christianity. 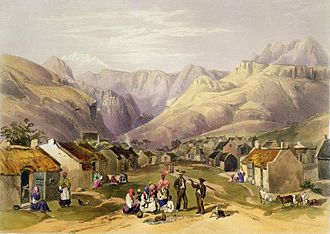 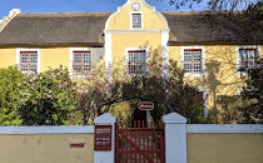 The Moravian Church is one of the oldest protestant denominations in the world and the name comes from the original exiles who fled to Saxony (in today’s Germany) in 1722 from Moravia (in today’s Czech Republic). The Moravians were pioneers of the widespread wave of Protestant evangelicalism from the eighteenth centuary and sent missionaries to countries all over the world, including the Cape of Good Hope. In 1737 they sent a young man named Georg Schmidt to the Cape. Thus, the Moravians were the first missionaries amongst the indigenous people of South Africa.

When Schmidt arrived at the Cape, he found Khoi families scattered around Baviaanskloof (later called Genadendal) in the Overberg region, and gathered them to start his work.. However, when he baptised five Khoi  in 1743 the Dutch Settlers and their church were so outraged resulting in his deportation from the Cape.

In 1792, nearly fifty years later, the Moravians received permission to continue with mission work in South Africa and in established good relations with the authorities. The London Missionary Society (LMS) was also active in South Africa, but in contrast to the Moravians, their ethos was highly political. The Moravians, given their sensitive position as aliens in a British Colony, were not inclined to pronounce on the politics of colonisation. During the tumaltious period on the eastern frontier from 1809, the LMS work amongst the Xhosa was disbanded by the authorities and all mission work in the Colony was entrusted to the trustworthy Moravians.  Xhosa-speakers from Boer farms, who spoke Dutch, started to arrive at Genadendal and the Moravians started considering the expantion of their mission activities to the east. 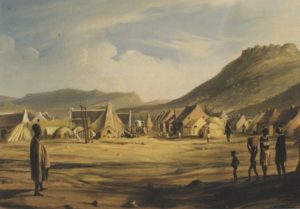 Before his departure from the Cape in 1826, Lord Charles Somerset suggested to the Moravians that they should expand beyond the frontier. Consequently their first mission station, called Shiloh, was established in 1828 between the Klipplaat and Oxkraal Rivers in the vicinity of today’s Sada and Whittlesea. Shiloh developed into a neat and well laid-out village on the banks of the river with a water conduit of about 5 km in length, well-cultivated fields yielding harvests of vegetables, fruit and tobacco and a population of about 800 people by 1868. On one of his visits Govenor sir Harry Smith  commented “I wish I had ten such stations along the border; this would be a better protection than all our military posts”. 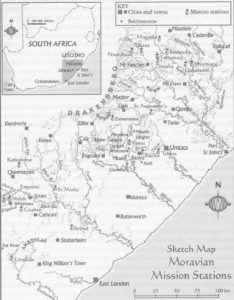 This volume contains four accounts of Moravian mission work on the Eastern Cape frontier. They are:

…. could be trusted. Meyer writes: ‘Words fail me when I want to tell you what a relief it was for us when, after two years of complete solitude, we could again hear human voices nearby, and in the evening see two or three fires showing that living beings similar to ourselves were not far away. For this we thank God, and trust that, after having struggled when we sowed the seed under stress, we shall now be able to reap a rich harvest of souls saved.’
These hopes were fulfilled. First separate individuals came to be baptised; these were later followed by whole groups arriving on horseback. Meyer wrote happily: ‘Once again we have souls to look after, children in the school, and manual workers to help us!’ On Saturdays numbers of pagans arrived to stay overnight as guests of members of the growing Emtumasi congregation, in order to attend Divine Service the next day. Crowds came to morning prayers early on Sunday mornings and then stayed on for all the services. Quite without being prompted, the pagans no longer appeared attired in traditional garb including faces decorated with red ochre; instead, they wore clean clothes. Meyer was kept occupied all day in his paltry little study. Mrs Meyer writes: ‘We’ll be eternally thankful for these blessed times. We couldn’t cope with all the demands on our time; my husband seemed hardly to be able to spare the time to be at home, as he travelled from kraal to kraal, often quite far apart.’
As an illustration of Meyer’s enthusiastic devotion to duty and perseverance, the following may be mentioned.
When candidates for baptism from the Hlubi tribe were receiving instruction, and flooding by the Kinira River threatened to disrupt this, Meyer was nevertheless determined to go to them: twice when crossing the river his horse stumbled on the slippery rocky bed in midstream, and he fell into the water.
One day a woman, one of her husband’s wives, came to Meyer, begging him to baptise her. Meyer asked her: ‘Does your husband know why you have come here?’ ‘No, he is not at home.’ ‘But when he comes back he will assault you; this has happened to others, you know.’ ‘I will bear it,’ she replied, ‘when I remind myself that Jesus was scourged because he loved sinners and also loves me.’
As the number of converted increased, Meyer realised the time had come to consider building a small church. A beginning was made after the family had travelled into the Cape Colony, where they had to take leave of their small daughter, Mathilde, who had to be educated in Germany. Two previous attempts to erect a church in Emtumasi had had to be abandoned as a result of the war. This time, however, the Christians living nearby helped with enthusiasm, although it must be recorded that at first, at least, no assistance was forthcoming from Zibi and believers who had settled further off…..

The translator, Friedrich Rudolf Baudert, is of thoroughgoing Moravian missionary stock. Trained at Natal University College, he became a mathematics teacher in Pietermaritzburg, and later worked for the Institute of Mathematical Research at the CSIR in Pretoria. He brings to this volume a deep personal knowledge of Moravian mission history and a first-language fluency in German.

Dr Timothy Keegan is a graduate of the University of Cape Town and the School of Oriental and African Studies, University of London. He is the author of several books on the rural history of the highveld in the era of industrialisation, and the nineteenth-century Cape Colony. He has written widely for academic journals in South Africa and overseas.