President M.T. Steyn is one of the heroes of Afrikaner history, leading the guerrilla war against the British from 1899-1902, and fiercely resisting submission. He was struck down by a neural disease in 1902 and was unable to participate in the negotiations that ended the war.

In 1902 he went to Europe for treatment and, after a partial recovery, he returned to South Africa. Although he was unable to participate fully in post-war political events, he became an ‘elder’ statesman (still in his 40s) who was consulted by the leading South African politicians on such subjects as the creation of an Afrikaner nation, the self-government of the Transvaal and the Orange River Colony, and the making of Union. 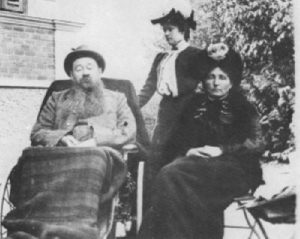 Under other circumstances he might have played a much greater role in South Africa, even, perhaps, altering the course of events. At the same time, in the tempestuous, multi-cultural South Africa of today, 101 years after Steyn’s death, many of his ideas are unacceptable, for, like his white compatriots, J.C. Smuts and J.X. Merriman, he could not imagine a society in which black men (let alone women) had a right to political equality. Yet this volume has relevance as it contributes, inter alia, to our understanding of political racism; of equal value is what it tells us about how to make a new country.

Marthinus Theunis Steyn features prominently in two earlier volumes published by the Van Riebeeck Society (VRS), viz. Die Konvensie Dagboek van F.S. Malan (1951) and Selections from the Correspondence of John X. Merriman, vol. 4 (1969). In both, however, what he said or wrote are parachuted into the text as they form only part of larger narratives not focussed on him. The run-up to his words in these volumes is thus absent, making it difficult for readers to appreciate how and why he reached the opinions he expressed.

He returned briefly to political life as vice-chair of the National Convention in Durban, to decide the terms of Union. His determination to preserve a strong Afrikaner identity, combined with his wise counsel and generosity, made a great impression on the other participants, including old enemies like Dr L.S. Jameson. Sadly, his health was too poor for him to contribute to the new Union. The letters in this volume are an extraordinary record of courage and intelligence.

Delegates at the National Convention, Durban 1908. 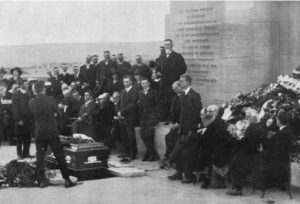 The burial of President Steyn at the foot of the Vrouemonument. General Christiaan de Wet is speaking.

This is the gap which this volume fills above all, for, in making available for the first time a wide selection of his letters between 1904 and 1910, it allows readers to follow his transformation from being a man whom the less-than- friendly 1911 edition of the Encyclopaedia Britannica called ‘the most irreconcilable of the Boer leaders’ to a person whom it felt was ‘distinguished for his statesmanlike and conciliatory attitude’. His role in the negotiations which produced the first ‘new South Africa’ in 1910 was pivotal and these letters show how and why his outlook mellowed sufficiently for him to gain such behind-the-scenes influence.

I had the pleasure of seeing my old friends Generals Botha, Smuts & Beyers & also Esselen. They came over to consult us on points which will very likely crop up in connection with the new constitution, e.g. the franchise, the native question etc. etc.

On the native question you will be pleased to hear that they all agreed with my view of the natives. I am sure no injustice will be done to the natives from our side. They all appreciate the seriousness of the question.

I took advantage of the opportuniry to lay before them your idea of a convention. They agreed with the advisability of such a convention, but considered that the time was not there yet. They held (and the Free Staters present shared their view) that we in the new colonies could only enter into such a convention after we have fulI responsible government. In a question of such supreme importance the people must be consulted, which cannot be done under the present form of government. I had a long chat with Smuts. He seems to be well satisfied with his visit to London, although he does not consider us quite out of danger yet. The one vote one value principle is still hanging like a sword of Damocles over our heads. With us it won’t matter much, but for the Transvaal it is a serious question. If they leave that principle & refer the Chinese question to the Transvaal Legislature, it virtually means that the Chinese question is decided. Unless the outrages of these celestials are stopped, I foresee grave difficulties. From what Botha tells me I fear that the hideousness of these outrages are [sic] systematically suppressed. Botha & Smuts have great difficulty in preventing the Boers from taking the law in their own hands.