Graham John Bower was born in 1848 in Ireland but the Bowers were a Scottish family. His father held the rank of admiral and saw the future of his son very much in terms of Her Majesty’s armed forces. Bower was accordingly sent to the naval academy at Gosport, in Hampshire. He joined the Royal Navy and later, in the 1870s, as captain of a schooner HMS Conflict he regularly visited Sydney where he met his future wife and became acqainted with Sir Hercules Robinson. The latter was Governor of New South Wales since 1872. 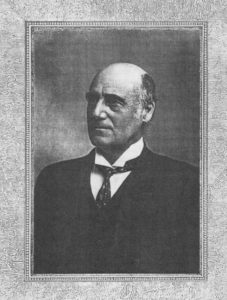 Robinson was appointed as Governor of the Cape Colony and High Commissioner for South Africa. On his recommendation Graham Bower was offered the attractive appointment as Imperial Secretary to the High Commissioner. He accepted the offer and transferred to the Cape in January 1881. He was awarded the knighthood, The Most Distinguished Order of St Michael and St George in 1892. 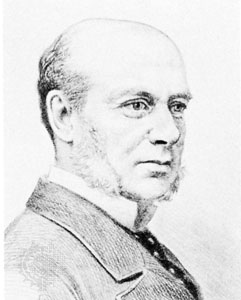 Bower and Robinson arrived in South Africa  just after the so-called Confederation wars which included the annexation of the Transkei Xhosa (1878), the Anglo-Zulu war (1879) and the disastrous First Boer War. They supported the newly elected British Prime Minister Gladstone’s  ‘magnanimity’ toward the Transvaal. During his stay in South Africa (1880-98), Bower increasingly endorsed the movement of responsible self-government in the British settlements in South Africa. The British annexation of the Transvaal (1877) and the subsequent First Boer War, increased his sympathy for and desire for closer association with the Boers, in the belief that South African problems and disagreements are best settled by the local population. 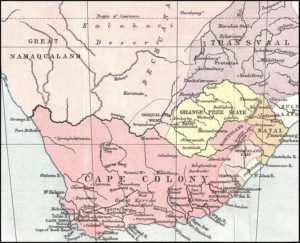 South Africa on the eve of the Confederation Wars (1878)

This publication of Graham Bower’s ‘Secret History‘ is a personal insider’s account of the great imperial scandal of the Jameson Raid (1895-6) and the coming of the Second Anglo-Boer War (1899 -1902). Although he was the official secretary to Robinson, British High Commissioner in South Africa, he chose to keep silent and play the role of a scapegoat rather than ‘blow the whistle’ to his boss Robinson after Rhodes had confidentially told him of his plan to send Rhodesian forces into the Transvaal, later known as the Jameson Raid. He refused to incriminate either Rhodes or Robinson at the official British inquiry in 1897, and his ‘noble lie’ cost him dearly, both personally and in a career destroyed. In 1898, he was appointed to the post of Colonial Secretary of Mauritius, a position he held until his retirement in 1910. 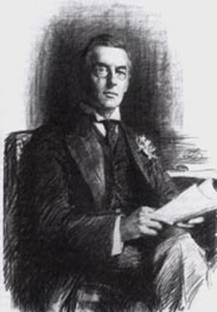 The editors have made this VRS publication from Bower’s unpublished manuscripts, his personal papers, official records – including the transcript of the 1897 ‘Lying-in-State’ Inquiry – plus oral traditional evidence from the Bower family itself.

In February 1901, Bower sent his ‘Secret History’ to his sons with a request that it should only be made public after his death. From the covering letter from Mauritius the following interesting quotes:

“The extraordinary series of blunders and deceits which have led up to the present calamitous War have hitherto remained secret.”

“The English people have blundered under the leadership of self-seeking and unscrupulous men.”

“I am  therefore writing the secret history of our present calamities.”

“In October 1895 Mr. Rhodes came into my office and said, ‘I want you to give me your word of honour you will not divulge what I am going to tell you Referring to the transfer of the protectorate, he then told me that the capitalists at Johannesburg had joined forces with the National Union, 9 and that a revolt would take place. My distinct idea is that he told me that the rising would not take place for two years, but his friends deny this, and although I am firm in my recollection, I do not feel sufficiently confident to swear to it. He also told me that he was going to move the police from Matabeleland to Mafeking, to be available for use if required. As he said, ‘You fellows are in­fernally slow. If you fellows won’t act I will. I am not going to see my country­men shot down.’ As regards Rhodes’s sneer about our being too slow; no one who knew Rhodes would attach importance to that. He hated red tape, and was always sneering at official ways. I ought to add that Rhodes told me that his brother, Frank Rhodes, refused to start for Johannesburg until Sir Hercules had been told. It was this ultimatum of his brother’s that sent Rhodes to me.

He then said, ’Am Ito tell the governor?’ At first I hesitated, and turning my back on him, looked out of the window to think. My desire throughout was that the imperial government should keep clear of all these revolutions. I had no objection to the Johannesburg people going into revolt, if they thought fit. That was their affair. But I wished to keep the high commissioner clear and free to act as arbitrator. There is only a thin sheet of paper between previous knowledge and complicity. But, on reflection, I felt the high commissioner ought to know, and said, ’You must tell the governor; it being understood that I would keep his interview with Sir Hercules secret. He said, ‘all right’ . . . [and] told me that his plans were approved by Chamberlain and Lord Rosebery who knew his intentions . . .

He then turned to go into the governor’s room. I saw him go in. The inter­view with the governor lasted about half an hour. There are two doors to the governor’s room. He went in by the door in the private secretary’s office and went out by the door in the passage. It was the invariable practice for Sir Hercules when he saw Rhodes, or a minister of any importance, to send for m when his visitor had left, to repeat the conversation and to ask me what I thought of it. He did not do so on this occasion. As the governor did not send for me, I went to see Rhodes, who stopped me with the remark — ‘He has taker it rather badly, and does not wish the subject mentioned to him’. I have since learnt that he made a similar communication to his brother Col. Rhodes, saying he had told the governor everything.

Now both Sir Hercules and Rhodes subsequently gave different accounts of their interview. As I was not present, I can not say what passed, but the next I day I went into the governor’s room to test his knowledge, and commence speaking about Johannesburg. He stopped me, saying, ’The less you and I hav4 to do with these damned conspiracies of Rhodes and Chamberlain the better This accorded with my views, and satisfied me that Rhodes had informed th4 governor. The governor added, ‘I know nothing about it and was very angry and impatient at my mentioning the subject. But he ordered me to allow the troops to come down to Pitsani, and to authorise the contractor to place the forage of our imperial post office relay stations at their service, to facilitate their march.

Now in this matter I wish to be clear about Lord Rosebery. In 1896 Sir Hercules, then Lord Rosmead, lunched with Lord Rosebery and mentioned the subject. Lord Rosebery said, ‘Yes, Rhodes said something, but I gave no opinion.’ I therefore hold Lord Rosebery blameless. There was no harm ii having troops on the border. The wrong was in subsequently hurrying up revolution in a friendly state in order to take advantage of that revolution t~ intervene. If the revolution had come naturally of itself, then intervention would have been a duty, but in this matter Lord Rosebery is blameless an4 Mr. Chamberlain wrong.

Late in October, or early in November, a private letter arrived from Chamberlain asking the governor’s views on a revolt at Johannesburg, ’with or with out assistance from outside? This letter was written from San Sebastian an was fairly long and friendly— but there had always been a feeling of distrust o: the part of Sir Hercules towards Chamberlain — very naturally so, I may say I This letter seemed to be a confirmation of Rhodes’s statement that he had told Chamberlain.

Sir Hercules gave me the letter, and desired me to draw up a memorandum of a suitable answer. I did so. I practically repeated my memorandum, written…

Professor Deryck M. Schreuder is the 16th Vice-Chancellor and President of the University of Western Australia. He has published widely in South African history, including The Scramble for Africa, 1887-95: the Politics of Partition Reappraised.

Jeffrey Butler is retired from the Wesleyan University, Middletown, Connecticut. He has also published widely in South African history, his most recent work being Liberalism in South Africa (1987).