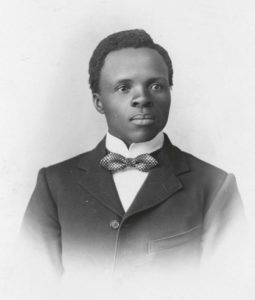 By any standards Solomon Tshekisho Plaatje (1876–1932) lived a remarkable life. From humble beginnings he rose to become one of the most important political and literary figures of his generation. He was inspired by a vision of a common society in which race and colour were no bar to full participation in the life of the country. He was a prolific journalist, a founder and first General Secretary of the ‘South African Native National Congress’, and author of several books – Native Life in South Africa, a hard-hitting statement on the rights of the black South African people, and Mhudi, the first full- length novel in English by a black South African, being the best known. 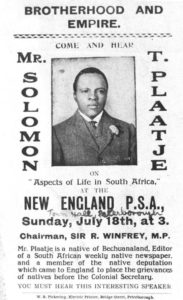 Born at Morolong, to a Tswana-speaking Christian family, Sol Plaatje – as he was known – received no more than a primary education before securing his first proper job as a messenger with the Post Office in Kimberley. Here he found himself part of a cosmopolitan black African community, drawn from all corners of southern Africa, and he taught himself the languages he needed to become a court interpreter, one of the best-paid positions open to black Africans at that time. Taking up a job in 1898 as clerk and interpreter to the magistrate in Mafeking, he was caught up in the famous siege which began on the outbreak of the South African War. (He kept a diary in English during this period that was first published long after his death in 1973.)

After the war he became the editor of a number of newspapers and was instrumental in the formation of the ‘South African Native National Congress’ in 1912. Appointed its first general secretary, he played a key role in the Congress’s campaign against the Natives Land Act of 1913, which imposed drastic restrictions on black African land purchase. In 1914 he travelled to England as a member of a delegation aiming to persuade the British imperial government to intervene and disallow the legislation. During the First World War he remained in England to finish his book, Native Life in South Africa while appealing to the British public for support in his campaign against the Land Act. 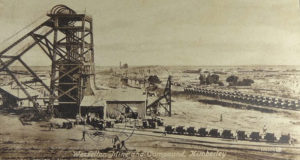 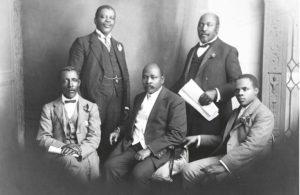 After a second visit to England from 1919 until 1923, during which time he also visited North America to publicise the Black South African cause, he returned to South Africa. He was forced to accept that there was now no longer any prospect of external intervention in South Africa’s affairs. At home Plaatje returned to domestic politics, but more as an individual spokesman than as part of any organisation. Apart from writing extensively for newspapers, he increasingly focussed his energies on his mother-tongue Setswana. Amongst others, he published a Setwana dictionary, Setwana translations of Shakespeare and an English-language novel. 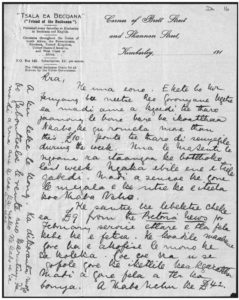 Plaatje was also a prolific letter writer, in both English and Setswana. He corresponded regularly with friends and family, as well as with many other individuals, supporters and opponents alike. Many of these letters were lost but this book reproduces over 260 that have survived, the majority written for private rather than public consumption. Those written in Setswana are accompanied here by an English translation. Taken together they shed new light on many aspects of Plaatje’s life and career, his private as well as his public concerns, from his time as a court interpreter and newspaper editor in Mafeking, to his political campaigns around the time of the Land Act of 1913, his travels to Britain and the United States and – towards the end of his life – his efforts to preserve Setswana from extinction.

I must tell you that I am happy to find … that you are in old England, pleading as hard as ever for the forlorn cause of the much misunderstood African. Besides the Colenso family, I cannot remember any white person who has fought so doggedly in the thankless cause of an ignorant, despised race, as you have consistently done. I have very often asked myself what encouragement or satisfaction you can hope to get for all the discomfort that I know you have had to endure, for the sake of our Race, which is helplessly ignorant, and too fettered to lend any tangible or material support.

I have read the Preamble and plan of your Association, formed at Johannesburg, while I was here (in England), and I find it accurately represents the aspirations of the Africans. We claim no monopoly of any part of Africa, and while others are warring for “a place in the Sun’” our only prayer is that in our own Continent of Africa the British Government should treat us as well as the foreigner. Surely no unprejudiced reasoner could misconstrue this into a desire to usurp other people’s prerogatives.

I am posting you my Book, pleading for the Natives of South Africa, which, as you know, does not represent your continent-wide experience. It only deals with conditions in that huge Black Man’s prison, which is officially and diplomatically styled “The Union” of South Africa, &c.

Many thanks for your kind letter of the 25th instant which, with the week-end pressure, I have been unable to answer till now. I cannot come to the Strand as I have a pile of work to get through before going away. But I shall hope to be at your service after my return to London before the middle of November.

In reply to your questions: I was never present at any meeting where a body of Natives approved of the present policy of South Africa; and if you addressed General Botha direct, I have no hesitation in telling you that his reply will be that I have had several interviews and correspondence with him, his fellow-ministers and officials on the matter, but that I have NEVER at any time, by word, deed or implication conveyed the impression that I approved of the Native Lands Act or any of its ruinous principles.

SECONDLY: When in 1914, the Native Deputation failed to enlist the sympathy of Mr. Harcourt, the A.P. Society advised us to send a petition requesting him to guarantee certain undertakings attributed to Gen. Botha by Mr. Dower in a letter to Mr. Dube. In signing this petition we made it clear to the Society that General Botha never uttered those promises in our presence – but even now the Society would seem to attach a greater importance to Mr. Dower’s letter than to the findings of the statutory Commission.

The letter was duly sent to Mr. Harcourt. His reply appears on page 201 of my book, thus: “If Gen Botha breaks his word I have no power to enforce it. I cannot bind his successors, &c.” I am accused (always behind my back) with excluding the whole of this interesting if futile correspondence. But since you are the first to address me direct on the point, my reply is that, my book deals with facts, that is, the declared pronouncement of statesmen, and not with hearsay allegations attributed to them in correspondence between third parties. The thing began at Denison House, we signed it on their advice, it was rejected by Mr. Harcourt so what useful purpose could I serve by giving a whole history of it? Further, seeing that I alone paid for the printing of this book, out of the scant income so hardly earned by Elizabeth and myself, surely my faultfinders must admit that I was entitled to select what matter should, and what matter should not, appear at my expense.

THIRDLY: With regard to your question whether the Commission’s awards are not instalments to be gradually added to in future you will please notice that Sir William Beaumont suggested something of the kind, which was promptly rejected by his four colleagues who decided to make their findings final; whereupon, in view of this final decision, Sir William, like a good Natalian, asked that Natal should be kept out of it. And I, like a good South African, likewise claim that South Africa “should be kept out of it.”

I am leaving this week to address two meetings at Stratford-on-Avon. On my return I will touch Oxford where a friend has for months been asking me to spend a week with him. He is a native of Oxford and his father a native of Cambridge; you will thus see that in the Provinces (just like in London) I cannot get out of the University atmosphere, so that if I am not a full-fledged scholar by the time I get back to South Africa, it will not be the fault of the Natives of your beautiful island.

With many thanks for your sustained interest in our

forlorn Cause, I remain,

With kindest Regards to Mr. Unwin and yourself

Brian Willan is an Extraordinary Professor at Sol Plaatje University and North-West University, and Senior Research Associate at the Institute for the Study of English, Rhodes University, and has written extensively on nineteenth and twentieth-century South African history and literature. His most recent book, Sol Plaatje: a life of Solomon Tshekisho Plaatje, 1876–1932 (Jacana, 2018), won the award for non-fiction (biography) from the National Institute for the Humanities and Social Sciences in 2020.

Sabata-mpho Mokae is the author of an accessible biography, The Story of Sol T. Plaatje (2010) and Setswana novels Ga ke Modisa (2012), Dikeledi (2014) and Moletlo wa Manong (2018). Alongside Brian Willan he is a co-editor of Sol Plaatje’s Mhudi: History, criticism, celebration, due for publication by Jacana in October 2020. He is the winner of the M-Net Literary Award for Best Setswana Novel (2013), M-Net Film Award (2013) and the South African Literary Award (2011 and 2019). He teaches Creative Writing in African Languages at the Sol Plaatje University in Kimberley