Although Lady Anne Barnard appears to have kept diaries for much of her life, she mentioned on several occasions her habit of destroying the original drafts as she produced “revised versions”.  This publication contains the “revised version” of her diaries from 1797 to 1798 which are called Journals while the other two volumes published by the VRS, Volumes II-29 and II-30 contain her Diaries from 1799-1800.

Lady Anne was also an accomplished artist. Some of her works are included in her published accounts of life in the 18th and 19th centuries. Her works include oil paintings and drawings.

In her early twenties she went to London to reside with Margaret, her widowed sister, where the two sisters lived together for many years. The beauty of Lady Margaret, and the charm and lively conversation of Lady Anne, ‘one of the most fascinating women of her time’, as a contemporary describes her, made them very popular. Their house became a social centre, and a favourite resort of some of the most famous literary and political men of the day. 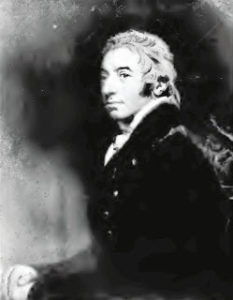 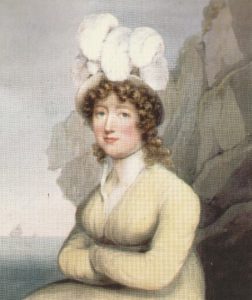 Using her political connections, Anne succeeded in obtaining a Government appointment for her husband, and in early 1797 the Barnards arrived in the Cape of Good Hope with the new Governot Lord Macartney. Macartney’s wife had not travelled out with him and so Lady Anne acted as his official hostess. They entertained the army officers and the Dutch colonists as well as visitors who were passing through the Cape.

This publication contains Lady Ann’s journals in three volumes that were revised from the original dairies she wrote during the years 1797 and 1798. This ‘revision’, by lady Anne herself, was most probably done between 1815 and her death in 1825 and were never intended for publication. However, they are invaluable for the light which they cast on ‘the interesting domestic particulars of life in Cape Town’, dealing with matters which male writers ignored. 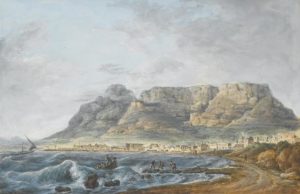 In addition, her place in society, as wife to the secretary of the first British governor and the latter’s ‘official hostess’, gave her access to a wide range of classes and people. Although carefully censored, her journals, enhanced by the quality of her writing, provide a unique of view of life at the Cape at the end of the 18th century.

The first volume is a description of the voyage aboard the Sir Edward Hughes sailing from London to Bombay via the Cape.

The second volume covers the year and a half during which the Barnards resided in the Castle and later in the restored cottage which they named ‘Paradise’ in what is today the Newlands forest. 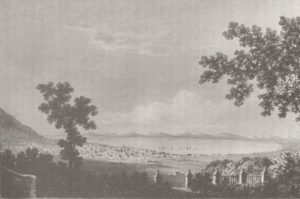 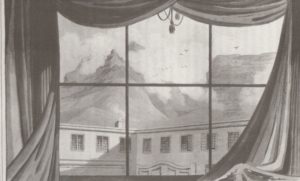 The third volume of the journals, covering the Barnards’ travel to the interior, brings out the ability of the author, who had already conquered Table Mountain, to cope with the rougher side of Cape life. Their wagon trek took them over steep passes through the Hottentots Holland mountains and across the southern Cape towards Mossel Bay, then back through the Breede River valley to Groenekloof (Mamre). The account is noteworthy for Lady Anne’s impressions of the Genadendal mission, and her description of encounters with a rich variety of trekboer hosts. 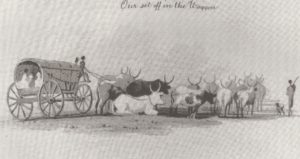 ‘Our set off in the Wagon’ 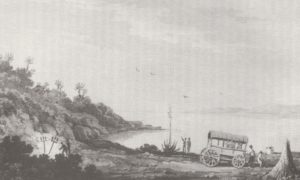 An admirable breakfast of a mutton chop of a particular kind (which I have before mentioned), being the side of the Sheep after the shoulder and leg is cut off, it is salted, peppered with crumbs of bread and parsley … nothing can be more Savoury … we had also very fine wild honey, the Gentlemen as I foresaw slept too long to think of shooting as we did not mean to stay longer here having seen the only thing worth looking at but to proceed on our route … One visit lies near my heart and I hope nothing will prevent our making it … Mr. Barnard has another which he wished me to pay to the Landrost of Swellendam who gave him a pressing invitation to  his House about 200 miles distant from the Cape, and a third to Jacob Van Rhenins [Reenens], these are our chief objects but we may chance to strike off from those as many other little plans according to what we hear of the face of the Country or manners of the people, my great wish is if we can to see  a  little  of  the  Real natives …  Hottentots,  caffres,  Boshemen  … the African Hollanders are not my pursuit, however it is possible that we may find them a better race the farther one pierces into the Country, and that nature though ruder may be more virtuous and liberal, round the Coast I do not much blame the people for being a little [niggardly] and anxious for gain, they live by what they can make of Strangers and by their Traffick with Ships and naturally adopt the follies and vices of those they must court … if I find them more to my mind as I travel on, I shall not conceal it, whenever a good quality is to be met with I am glad to open my eyes wide to it.

What I have endeavoured and shall endeavour to do is to give the topo­ graphical account of all I see cultivated for you mon cher ami Monsieur Dundas … Africa is your Masters Villa (George the 3rd) … You his Trusty Major domo have sent us with the excellent Stewart who at present keeps the House Book and with his eye over us to point out what the Vrow and the Maun should remark we are not likely to send you groundless representations.

One of the Slaves here seeing me take notice of one of his Children, pleased and flattered brought me seven more, one of the little ones she made me understand was dumb, l looked into its  mouth  and  saw evidently that the tongue was tacked down by a Ligament I have often seen cut. How I wished that I durst have set it a going with my Scissors but while I looked, the Child began to roar, and as it was a Girl I thought it was possible I might do more harm than good by giving liberty to an unruly member.

Jesting apart, I feared the locked Jaw which I have sometimes heard was…………..

Edited by A. M. Lewin Robinson

Dr Antony Lewin Robinson was director of the South African Library from 1961-1981, and was responsible for the acquisition of some of the original Lady Anne Barnard letters for the library in 1948. He made a special study of them over the years that resulted in the publication of The Letters of Lady Anne Barnard to Henry Dundas 1793-1803, in 1973.