Goldswain was born in Buckinghamshire, England in 1802. In early nineteenth century England young people were faced with unemployment and hundreds of them accepted the British government’s offer of assisted emigration to the Cape. Against the advice of his parents, the young Jeremiah, aged 17, sailed from England as a member of the party of William Wait, to whom he was indentured as a servant. After his release from Wait’s service he was employed as a farmhand and soon after that he followed the trade of sawyer working the stone quarries in the vicinity of Grahamstown.

War Dance of the Fingo’s at Rietfontein near Port Elizabeth

The first part of Goldswain’s journal covers the period from his arrival on the frontier in 1820 until after the Sixth Frontier War when he and his family took refuge in Grahamstown. The second volume starts when the Great Trek was reaching its height in 1837 – 1838, and ends with the ‘cattle-killing’ ‘ or “national suicide’ of the amaXhosa in 1858. It thus covers a most interesting period in South African history. 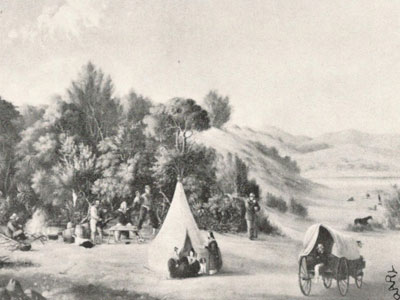 In the years following the Sixth Frontier War Goldswain was farming but was also actively involved in the subsequent wars as the driver of an army transport wagon. He and his family’s daily life continued under constant threat of danger. Much of his time was spent on patrol against the amaXhosa and in 1846 the Seventh Frontier War broke out. It is clear that Goldswain found this active and combative life exciting. He left Bathurst after the war when he and William, his eldest son, went into partnership and bought a farm named ‘Burnt Kraal’ , three miles from Grahamstown, with its flock of prize Merino sheep. Here he lived for most of his remaining years, taking refuge in Grahamstown only when danger was imminent.

The journal ends with a description by Goldswain’s son and daughter of the distress in Xhosaland resulting from the great Xhosa cattle-killing delusion of 1856-57. He finished writing his reminiscences in December 1858 but lived until 1871 when he died in Grahamstown. He left us with an honest record of the life of a British settler in Albany during the first years of the settlement when the issue of White or Black occupation of the frontier still lay in the balance.

Extract from the text

“I laid still and as soon as I thought that it was safe for me to move I lisned and hearing no noise or talking I crept out and went farther out into the bushes and as soon as I thought that I was faranuf away from the road I turned back and came down an old road along ways above the wagon road and as soon as I came to the wagon road I crossed it and cept cloce up to the the Bush untill I came to the old Cradock road and then I crosed the main road and came a long the old road knowing that it came cloce to your house : and when I got all most to the back of your sheep kraals at the bush on the opersiteside of th road I was afraid to come aney farther as I knew that you had so meney sharp dogs and you your self on the loockout : and if you should see me before I caled out I knew that I should git an other shot and your dogs would tear me to peaces.” “When did you rive thear?” “I donot Know the time.” “But did you hear one Goate goad the other?” “Yes I did – and what time was that?” “That was just after two oClock : I was on the loockout : “I had not been here but a few minets when I heard the Goat cryout.” “I have had but verey little reast for the last three weaks and I and my tvo sons is all most socked up.” Mr. Erskine rived with his spring wagon and my Son Wm. Mr. W Webbster J. Roberts and one or two others. Our horses was all readey saddled and seven of us started to the hill. Neer
to the De Bruins Poort we saw meney spoors of the Reble Hottentots and Kaffers. When we was ashort distance from the place wich Mr Booth had pointed out to me I said : “There that is the bush from wich the Hottentots fired the first volley.” We came up to the place and saw ware Mr. Booth fell : we all dismounted and well about we comenced sarching to see if we could see aney thing of the other two men when my Son being afew spaces infrunt called out : “Hear lies one of them.” We all rushed forverd and saw…………………. “

A LARGER COPY OF THIS MAP IS AVAILABLE HERE

Una Long was a Fieldworker in History at Rhodes University, where she was charged with the task of locating, and securing for the Cory Library, privately owned unofficial manuscripts relating to the history of South Africa.