Dr Andrew Smith during the Expedition 1834 (Sketch by Charles Bell) 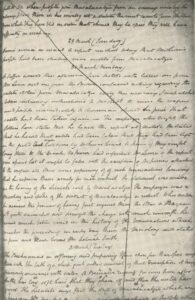 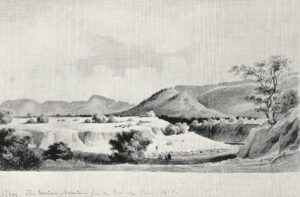 Magaliesberg from the Magalies River (Sketch by Charles Bell) 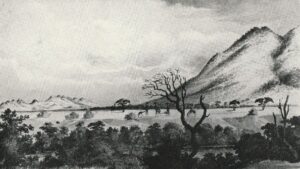 On the Limpopo River (Sketch by Charles Bell)

This, the second volume of Smith’s Dairy picks up the expedition travelling from Mafikeng to the Molopo River and further north to Mosega with descriptions of Baralong social life. From there they pressed east through the Zeerust Valley to explore the Magaliesberg. Along the Magalies River they reached the confluence with the Crocodile River, a point not very far from where Pretoria is today. From there they turned east and then north and reached the Tropic of Capricorn on the Limpopo River on 4 September 1835. Then they turned back to return to Cape Town via Mzilikazi whom they visited for the second time. The diary includes extended accounts of wild life as well as the customs of the African peoples they encountered.

On several occasions he was sent by governors on missions to visit indigenous tribes beyond the frontier. During these missions was able to indulge in his interests of natural history and anthropology.

In 1833 the reports of traders from North of the Orange River led to an 18-month-long expedition by Andrew Smith to Basutoland, Kuruman, the headquarters of Mzilikazi (the chief of the Ndebele) and as far north as the Magaliesberg. Amongst others he was accompanied by Charles Bell as the expedition artist. Smith returned with two of Mzilikazi’s advisors who forged an alliance with the Cape Colony on behalf of their chief. Smith’s “Report of the expedition for exploring Central Africa” was published in 1836. Except for two short reports that appeared after his return to Cape Town from the interior in 1836, no detailed account of his travels was ever published.

The Diary of Smith, kept during the “Expedition for Exploring Central Africa”, was discovered in the South African Museum in Cape Town in the late 1930’s and was edited by Percival R Kirby and published by the VRS in two volumes, Vol I-20 in 1939 and Vol I-21 in 1940. 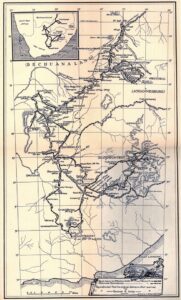 The tyger [sic] when pursued by dogs prefers to retreat to a hole in the ground rather than to a tree. When in a hole and a gun is fired into it, he immediately springs out, and should any person be opposite the hole he will fly upon him. Should he have been wounded by the shot he first bites one and then flies to another. He kills smalt baboons, bites them dead, and then suddenly flies to escape the vengeance of the old ones. A male baboon, if once he gets hold of him, quickly bites him to death. He is often pursued for a distance by the herd after killing a young one. When they go away from it, he returns and eats it. He sometimes kills his prey, then leaves it lying in the place where he killed it whilst he retreats a little and watches what may come to eat of it; that he also kills. In this way he has been known to catch dogs, cats, etc. by killing a sheep and letting it remain on the spot where it was caught. Sometimes he hangs up animals which he may catch upon trees, the natives say till they stink, and then returns and eats them. The tiger is never far from the spot where he has food waiting for him. When persons are passing near to him, he will remain still, neither attempt to injure the person nor run away. The lion, on the contrary, generally gets up and runs off should he see a man. The lion generally remains close to his food when he has killed anything. In this way he differs from the tiger. Most of the game in this direction retreat to the hills during the winter. The footmarks and dung of both old and young rhinoceroses were seen on the very top of the Cashan hills. Elephants often pass over the tops of high mountains. The new species of Bucco with crest is pursued by small birds, and like the owl harassed by them. Whenever it is discovered it flies always into the lower parts of trees or shrubs, etc.; never perches on the top. It is an inhabitant of the sides of hills and eats berries.

Edited, with an introduction, footnotes, map and indexes by Percival R Kirby, Professor of Music and History of Music, University of Witwatersrand, Johannesburg.