The Journal of Hendrik Jacob Wikar [1779] with an English translation by A.W. van der Horst; and the Journals of Jacobus Coetse Jansz [1760] and Willem van Reenen [1791]

The Journal of Hendrik Jacob Wikar [1779] with an English translation by A.W. van der Horst; and the Journals of Jacobus Coetse Jansz [1760] and Willem van Reenen [1791]

This volume contains journals of journeys to the Orange River [Gariep] undertaken by three different people. The first was in 1778 and 1779 by Hendrik Jacob Wikar, the first European who is known to have journeyed along the river. The second, in 1760, was by Jacobus Coetsé Jansz, who was the first known European to have crossed the river into Namibia in search of elephants, and the third by Willem Van Reenen, who crossed the river in search of copper in 1791.

Hendrik Jacob Wikar was a Swede born in Gothenburg, who entered the service of the Dutch East India Company at Amsterdam and arrived in the Cape in 1773 as a soldier. He took to gambling and card playing and became indebted to various of his friends to the extent of 300 Gulden while he was earning only 9 Gulden per month. He was overcome by shame when he was publicly insulted about his debt in the street and became so desperate that he deserted from the Company’s service in April 1775. He knew that no deserter was safe from the long arm of the Company and fled north, beyond the settled districts of the Kammiesberg. We know nothing about Wikar’s adventures between April 1775 and September 1778 when his journal starts, but he was near Gádaos or Goedous (Goodhouse), on the southern banks of the Orange River [Gariep], as shown on his map. 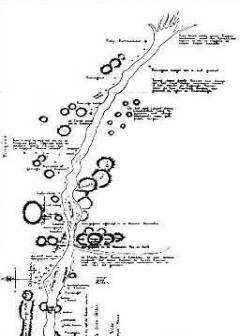 Part of Wikar’s map of his journey

At some time before Wikar set out on his second journey in April 1779 he had sent a petition (“smeekbrief”) to the Cape Governor. He entrusted it to some of the Khoi to give to the nearest European farmer. In his petition he asked humbly for pardon and forgiveness for his desertion. He told the Governor that “he had made a collection of natural objects and rarities” and that during his wanderings he had kept a journal which contained notes of the ceremonies, customs and beliefs of three hitherto unknown tribes. When he returned to his “house” from his approximately 300 mile journey along the river as far as Koegas, which lies between today’s Upington and Prieska, he received the Governor’s permit authorizing his return to the Cape.

On his return he was assisted by Landdrost de Wet to produce, for the Governor’s perusal, an ‘improved’ edition of his diary dated 18 September 1779, which forms the substance of this book. A week later he was pardoned and reinstated in the Company’s service at his former wage by a resolution of the Council of Policy. 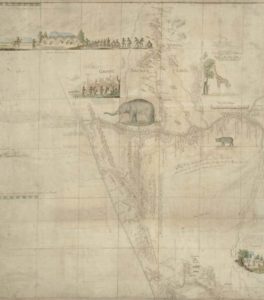 Jacobus Coetzee (Coetsé) received the rights of occupation at “Klipfontein at the corner of the Picquet bergen” in 1758. This farm is now the site of the village Aurora. Coetzee could not write and the story of his journey was written by the Secretary of the Council of Policy.

In 1776 Coetzee obtained permission from the Governor to travel ‘inland’ to hunt for elephants. He left Klipfontein on 14 July 1776 with two wagons and accompanied by twelve Khoi servants. He crossed the Orange River [Gariep], (which according to him “has never before been crossed by a member of any European Nation”) and continued his journey northwards along the Leeuwen River (today called the Homs River), a tributary of the Orange [Gariep]. 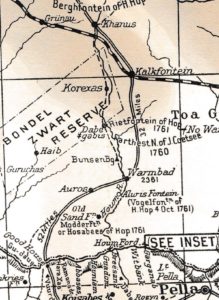 Willem Van Reenen lived in Rondebosch and also had a farm called Seekoevlei near the present Graafwater. He and his brothers were well known affluent figures at the Cape towards the end of the eighteenth century. Van Reenen accompanied the botanist William Patterson during the latter’s journeys in the Cape from 1777 to 1780 to collect plants. After these journeys there were rumours at the Cape that gold in vast quantities was to be found in today’s Namibia. In 1793 Van Reenen, at his own expense, but with the permission of the authorities, made a journey which lasted for nine months, from the Cape across the Orange River, to a mountain or mountain range in Damaraland and back. Near this mountain, which he named Rheniusberg, was a hot spring near which there was a copper mine (this is the well-known hot spring at Rehoboth where the first gold discoveries in Namibia took place in later years). Van Reenen brought back ore which proved to contain copper but no gold. 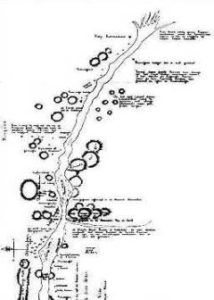 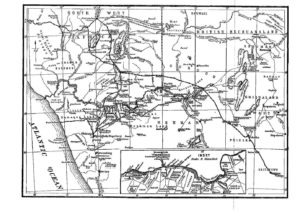