The Last Voyage of the Guardian, Lieutenant Riou Commander, 1789-1791

The Last Voyage of the Guardian, Lieutenant Riou Commander, 1789-1791

The voyage of His Majesty’s Ship Guardian is unique in naval history.

The HMS Guardian sailed from Spithead in September 1789 laden with stores and provisions for Britain’s new colony in New South Wales, but did not ever reach her destination. Thirteen days out from the Cape of Good Hope she struck an iceberg that tore away her rudder and most of her keel. Half the ship’s company took to the boats, only one of which survived the stormy 1300-mile voyage back to the Cape. 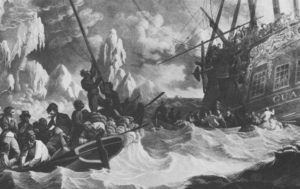 Part of the crew of HMS Guardian endeavouring to escape in the boats.

A month later, through exemplary courage and seamanship and against all probabilities, the crippled Guardian herself sailed into Table Bay. Here her young captain, Edward Riou, was to spend an anxious and frustrating year before he finally received orders from the Admiralty to dispose of the fatally damaged ship and return home.

The full and fascinating story of the Guardian’s voyage is told in the ship’s logs and letters that make up this volume. They emphasise the close-linked small world of the Royal Navy, and the delays and difficulties, almost inimaginable tyo the modern reader, imposed two centuries before by the ‘tyranny of distance’. Captain Cook and the Bounty mutiny have a place in the story; so, more importantly, does the great naturalist Sir Joseph Banks, who designed a greenhouse for the Guardian’s quarter-deck that was partly stocked with plants from the Cape of Good Hope. 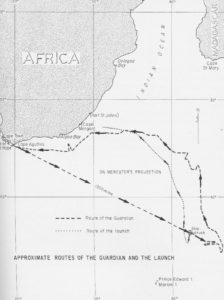 Approximate Routes of the Guardian and the Launch

“….. and delay, with the water gaining very fast upon the pumps then employed: all the hands that could be spared were set to work to clear the deck of the cattle, booms of the hay and gun carriages, bows of the spare anchors, and between decks aft, of the provisions and such articles as could be got up, and hove overboard, holding themselves in readiness to man the pumps as soon as repaired and put in proper [order]. They were employed accordingly, and withdrawn as required.

By about 9 o’clock, the pumps were all at work, and three or four people were left between decks, to hoist up, and heave overboard what they could manage. The water had at this time encreased to three feet and an half, and was still gaining on all the pumps. Our spirits, however, were good, and the work applied to in great earnest, both at the pumps, in the hold, and throughout the ship in general. The few hands left between decks did almost more than their strength could be expected to effect: in the course of an hour, they got up and hove overboard most of the bags of flour, pease, wheat, barley, &c. received at the Cape of Good Hope, besides several small casks for the Colony, also two hogsheads of tobacco. These were broken in pieces, and the tobacco torn asunder in fleaks, which were on deck, and flung overboard. At about half past 9 o’clock, one of 4 chain pumps breaking, Mr. Sommerville, the Gunner, and a few more went down between decks, and thus reinforced, the men below got a number of casks of different kinds, also a considerable quantity of bread, and boxes and packages out of the gun-room, which were all committed to the sea. At about 10 o’clock, we were obliged to break off from clearing away below, to shut and cover over the hatchways with tarpaul­ings, to prevent the roll of water going down between decks, which the scupper did not vent near so fast as the pumps threw up. By this time the Water had encreased to above feet, the larboard pumps only at work. The carpenters were still employed repairing the chains of the starboard one, and a few people engaged about one of the guns, abreast of the mainmast on the same side. The hands coming up from below, were sent to assist them to launch it overboard, and by the time they had effected the business, the pumps were repaired, and in readiness for them to go to work on.

Since the first of our misfortunes, there had not yet been an officer or man, but was laboriously employed in one way or other, and there still remained business for treble the number of hands; it was, however, im­possible that the few we had could [hold] out much longer if continued to be employed together; a reservation was accordingly made, by dividing the whole of the officers, seamen, convicts, &c. into two watches to relieve alternately by the half hour, and at about half past ten, the first division on spell went on to the pumps. At this time, the Captain ordered refreshments to be allotted to each man, taking particular care that the grog should not be made too strong. Every man received a dram for the first supply, with biscuit and cheese, which seemed to give them fresh spirits to return to their laborious duty. The rum above was soon nearly expended, but the Captain thought it would be extremely dangerous to open the Hold to get more, for fear of the men’s getting at it. Wine and Water was accordingly given in lieu of it, as a small cask had been got up on the first clearing away be gun room and between decks.

At midnight, the water had increased to six feet, and it was then blowing a very strong gale of wind, and an immense high sea running. The ship at his time steered N.N.W. to N.W. by W., the wind at N.E. to N.N.E. At day break a few hands were set about filling one of the lower studding sails with oakum, by sewing it up to the sail in rolls. At five A.M. the water was u-half feet in the hold, and the off watch were ordered to get the sail under be ship’s bottom, which was found to be extremely difficult. The leak however gained upon us near a foot water during this application. By unwearied labour at the pumps, however, it became reduced, and con­tinued diminishing till near eleven o’clock, when the water was reduced to on1y nineteen inches.

At half past eleven o’clock we were, however, unhappily informed that the leak had again gained on us some inches, and continued so to do, more or less, for a short time. Another sail was nextly prepared for a second fothering, which again encouraged our hopes. At noon the water was at 27 inches, the ship’s head about W. the wind blowing very hard.

It still continued to blow a strong gale of wind with very cloudy weather, and frequent showers of hail and rain, the sea running extremely high, often breaking over the ship with great violence. Between one and three o’clock P.M. the second fothering was got under the ship’s bottom. About this time [some] of the crew became almost unable to perform any duty, from their limbs being benumbed by the frequent transition from the heat of labour, and having rested in wet cloaths. The weather was likewise uncommonly piercing. At four P.M. the water again gained on us, when Mr. Clements went down by the way of the rudder into the gun room, from thence into the bread and spirit rooms to endeavour to discover the leak, but without effect. It was then thought fit to endeavour to scuttle the deck close aft, which being out of the roll of the water, would enable us to get up and heave overboard some more of the cargo.

Accordingly the Captain, the Chaplain, the Purser, and two men were employed in this business, but unfortunately endeavouring to heave up a cask, it fell back on the Captain, and bruised his hand in so shocking a manner, as to disable him from giving any further assistance.”

Edited with an introduction by M. D. Nash
M. D. Nash was formerly head of the cultural history divisions of the Port Elizabeth and Albany Museums, and is a recognised authority on the 1820 settlers. Her interest in maritime history was sparked by research into shipwreck sites and salvage off the Port Elizabeth coast.