Ludwig (Lodie) Krause was born in Bloemfontein in 1872, one of five boys from a father who came to South Africa in 1850 as a missionary of the Berlin Missionary Society. He had been educated at Grey College, Bloemfontein, and was the holder of four university degrees, including a master’s degree in law of the University of Cambridge. After completing his law studies he was admitted as an attorney of the High Court of President Kruger’s South African Republic (Transvaal). He joined attorney Van Soelen, his future father-in-law, as a partner practicing in the platteland town of Pietersburg. 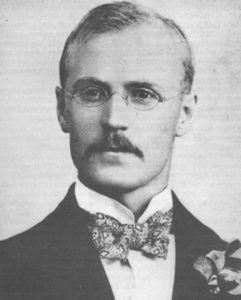 Krause, as a member of the Progressive Party believed that the war was not inevitable. “It could easily have been avoided. We of the Progressive Party condemned the policy which led up to it.” Despite this view when the war started in 1899 Krause left legal practice to fight for the freedom of his people against apparent British imperialist aggression. At first he was an ordinary burgher on the battlefields of Natal, but later became an officer in the guerrilla war waged in the Northern Transvaal. Like other, more widely known, war leaders of the Boer Generals Smuts, Hertzog, and Beyers –  he also showed that a legal practitioner could be transformed into a resolute leader of men in extraordinarily hazardous situations. 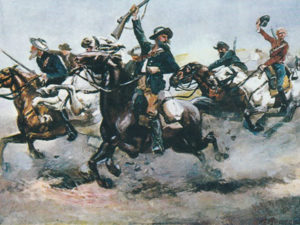 “Buren attack” from the coloured plate by Wilhelm Roegge (1902)

Krause was captured in a campaign in the Magaliesberg and tells us himself that he was then confined in the Johannesburg Fort on 24 December but was within two days given parole to stay in Johannesburg. Soon afterwards he was summoned for an interview with Kitchener, courteous, but on Krause’s part, there was no question of collaboration with the British. Later he was shipped off to India and confined in a camp in the Madras presidency. He was one of the restless spirits who tried to escape by digging a tunnel under the camp. Unfortunately for him, the British discovered the tunnel, and the ringleaders were transferred to closer surveillance at a more secure camp. 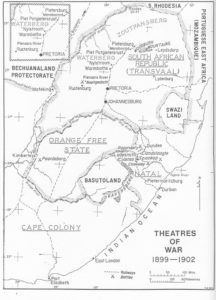 The memoirs of Krause are remarkable for their clarity and descriptive power. He compiled them soon after his capture in December 1900, and their value is enhanced by his outspoken and sometimes pungent opinions, not only of his British foes, but of some of Kruger’s adherents who lacked competence and fibre. Krause’s vigorous unvarnished testimony has high historical importance and, after nearly a century, takes its rightful place among the foremost published accounts of a Boer combatant’s involvement in the South African War.

EXTRACT FROM THE TEXT.

“I then pointed out to him how peculiar it was that the enemy should have bombarded the Pass and not Monte Cristo. “But” said he, “Commandant Buis, I tell you, is there with 500 men, and in possession of the place. I have the most exact reports of what the enemy is doing. They are nowhere near the place. And tomorrow morning early you are getting strong reinforcements, and should the enemy attack in very large numbers, I have plenty of men here, who can reach you in a very short time?’ “General,” I said, unable to get rid of my suspicions, “Have you been over the ground yourself? Has any attempts been made to fortify the place, or even to make little schanses?” “I have not been there myself,” he said, “but it is as I have said, and you can take my word for it!”

As we rode towards the Pass that night, McKechnie said to me, “I am by no means satisfied with General Fourie’s replies. I have a foreboding that all is not well and that things have been mismanaged. What a shame it will be. It looks as if General Meyer and Fourie are throwing away the whole thing. What a pity Louis Botha is not here!” “However,” I replied hopefully, “with the 500 men under Commandant Buis, our 100 and the 700 General Fourie is sending in the morning, we ought to be able to hold our own easily?’ And with this reflection we strove to console ourselves and to banish the gloomy forebodings of evil.

We duly carried out our instructions. Before daylight the first division of 50 men were sent off to the further end of the mountain. The men were mostly without any food. McKechnie, young Biccard and I were better off, as my boy Jan Crots always kept our saddlebags and wallets filled with Boer biscuit, “biltong” (dried and salted meat), one or two tins of potted meat, and some coffee. So we were able to make a tolerably good breakfast.

We discovered Commandant Buis with a few men in our vicinity, and on enquiring the number of men he had with him altogether, we learnt with astonishment that there were barely 150, very few of whom had ever been on the mountain, or knew how it looked, and that he had not particularly bothered because he did not think it likely that the enemy would ever attack that place. This unpleasant bit of news undermined the last shred of credence we might still have been inclined to place in General Fourie’s assurances and promises. We immediately sent him a report with this information about Buis, implored him for the promised foodstuffs, and besought him to send the 700 men without any delay

The enemy had already begun their daily bombardment, only the Pass and the slope of the opposite mountain which was now on our right, were being shelled. We pointed out this circumstance to the Field-Comets present, and they very wisely ordered their men to hold themselves in readiness to go into action at any moment. It was now getting on to 6.00 a.m.; it was broad daylight — still the promised foodstuffs and the badly needed reinforcements were not making any signs of appearing. My heart sank as I looked at our small number, who seemed to have become quite forgotten by both Generals.

We were anxious, restless and desirous of making a personal inspection of the situation from the top of the mountain. Mac, young Biccard and I saddled and mounted our horses in order to ride up as far as possible. We took our boy (achterryer) with us to hold our horses for us when we dismounted till we returned. We were just on the point of setting out, when one of the men who had been sent with the first division of 50 men in the early morning, came racing down to us with the news that the enemy were already at the foot and on the slopes of the mountain, on the other side, and that our men were having a hot engagement. One of our corporals, a very kindhearted, hardworking and extremely popular young man, had been killed as the men were approaching the top of the mountain in order to take up their station. His last words were: “Don’t mind me, I’m done for, but right chaps, don’t give in!”

We immediately despatched a messenger to General Fourie with this news, and urged him again to send those 700 men to reinforce us without delay. We raced up the mountain as far as we could, and then left the animals in charge of some men and boys; and hurried to the top. The enemy’s bullets were already whizzing about our heads like swarms of bees. The slopes of the mountain were thickly wooded, but the top, where we were, was almost bare, with hardly any kind of cover. The mountain stretched out with a curve for over two miles, and we were (together with Buis’s men) not 250 men to defend it. It may be imagined how drawn out and scattered about this small number, this mere handful, soon was. Keeping young Biccard with me I went down the slope of the other side for about 150 yards, and there we soon built up a small schans, and we opened fire on the troops whom we could see advancing to the foot of the mountain, and up the slopes, appearing and disappearing in the bush.

The firing was very hot. It was young Biccard’s first coming into action, his baptism of fire, and he rather amused me. At first he could not be persuaded to lift his head above our schans. But no sooner had he fired his first shot…..”

Edited by Jerold Taitz with Ken Gillings and Arthur Davey
Professor Jerold Taitz was a distinguished legal academic who published extensively in national and international journals, mainly in the field of medical jurisprudence. He held the B. Juris(SA), LLB (Hons) (London), Drs Jur (Leiden) and LLD (Cape Town) degrees, taught at the University of Cape Town and later occupied the chair of Public Law at the University of Durban-Westville. A passionate interest in South African history led him to Ludwig Krause’s memoir and a realisation of its singular importance.