Olive Schreiner was born in 1855 at a mission station “Wittenbergen” in today’s Herschel District of the Eastern Cape near the border of the Free State and Lesotho. Her farther Gottlob, employed by the London Missionary Society, arrived in South Africa with his wife in 1838 and all their twelve children were born at the mission station. They both imposed a strict religous evangelicalism on their children. Olive, when twelve years of age, was sent to stay with her elder brother in Cradock where he was the headmaster of a school where she would have finished her schooling.

Schreiner sought financial independence through becoming a governess for a succession of mainly Boer farming families in the Cradock area. It was through these experiences, she later commented, that she changed her ideas about “race” and ethnicity regarding Boers and black people. 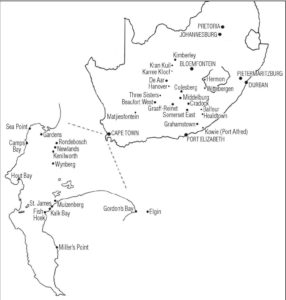 She left South Africa for Britain in late 1881 to pursue nursing training but it ended as a result of severe chest infections and asthma attacks. Her book The Story of an African Farm was published in London when she was but twenty-eight years old in 1883 and it immediately received many laudatory reviews and considerable publicity making her famous and financially independent. During her stay in England she became involved in political activities, joining socialist-inclined organisations and more particularly the rights of women. She returned to South Africa in 1889 and due to her poor health she was forced to pass much of her life in isolated locations – of her 23 years in the country after her return, eighteen were spent on farms or in remote villages like Matjiesfontein, Hanover, and De Aar.  Letters were central to her interaction with others. She became involved in South African politics and met Rhodes, for a short time admiring him but soon changed her mind, from attraction and support to open opposition. Bitter disagreements erupted within the Schreiner family about British imperialism in South Africa which continued through the South African War of 1899-1902. 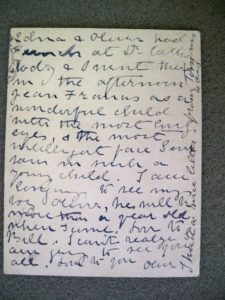 A page from Olive Schreiner’s letter to Fan Schreiner, 7 June 1920

The World’s Great Question features over 300 of Olive Schreiner’s key letters on South African people, politics, and its racial order. They are often prophetic and can still send shivers down the spine. Immensely readable and insightful, her South African letters:

It was a great pleasure to me to meet you & your wife248 yesterday & I trust that our brief acquaintance may ripen into sincere friendship.

It is a strange thing that you remind me so much [in] voice, manner, appearance & character of FS Malan! I much hope I shall some day be able to bring Malan fully into line with us. He is almost the only leading man who does seem capable of seeing our question from the wide moral & human side.

I am sending you a little paper I wrote during the war. The last page will show you that even then I was thinking of & as far as I could working for our cause.

As soon as the Union Parliament meets I mean to gather together a body of white women, & make an appeal to be heard at the bar of the house, – to petition for extended rights to the native & the doing away of the colour bar on the ground that having no vote our voice has not been heard in the drafting of the constitution. If they refuse us I will print the speech I intended to make.

I think your paper first rate. Please return the enclosed paper251 at once, as it is the only copy I have, & I need it.

Liz Stanley is Professor of Sociology at the University of Edinburgh. She is the author of Olive Schreiner’s Social Theory, Mourning Becomes: Post/Memory, Commemoration and the Concentration Camps of the South African War, and twelve other books. She holds Visiting Professor positions at the Universities of Johannesburg and Pretoria and is a former Hugh Le May Fellow at Rhodes University. She has worked on Schreiner’s remaining manuscripts as well as her letters and has a book on them under way. Liz’s current research is on Whites Writing Whiteness.

Andrea Salter is Research Associate in Sociology at the University of Edinburgh and holds a research position at the University of Cambridge. With Liz Stanley, she produced the Olive Schreiner Letters Online (www.oliveschreiner.org) and now works on the Whites Writing Whiteness project. She has published on the British social research organisation Mass Observation, Olive Schreiner’s letters and political concerns, and broadly on analysing ‘documents of life’ and the narrative, archival and digital methodologies involved. Andrea is currently working on the role of letters in organisational, institutional and business settings.