George Thompson, who arrived in the Cape about 1818, was a successful merchant in Cape Town. He married a Dutch woman and travelled widely in southern Africa in the early years of the 19th century. His book, Travels and Adventures in Southern Africa, was first published in 1827 while he spent a year in England. He returned to the Cape and stayed here until he was 63 years old, all in all spending about forty years of his life in South Africa.

The historian Theal asserted that, “This book is one of the best that has ever been written upon South Africa” and that the author’s “powers of observation were keen, his mind free from prejudice, and his style of writing was clear”. 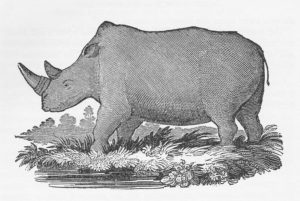 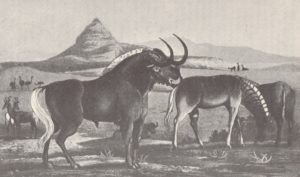 In the preface of his book Thompson wrote “My education and pursuits have been mercantile, not literary or scientific. I have been a traveller partly from motives of business, partly from the impulse of curiosity. I entertained no idea of becoming an author, until the accumulation of materials, and the recently awakened demand in the Cape Colony for fresh information in regard to its condition and resources, induced me to revise my Notes and Journals, and to select for the press the portions now submitted, with some hesitation, to the public.”

Thompson initially came to the Cape, probably to open a branch for a London merchant firm. Later he became a partner in the firm and remained associated with it during the forty years he spent at the Cape. His role in the cultural life of Cape Town is indicated by his membership of various voluntary organisations. This included, amongst others, a council member of the South African Literary and Scientific Institution, the Cape of Good Hope Agricultural Society and director of the South African Public Library.  He was also very supportive of the establishment of a botanic garden for Cape Town. On the bussiness front he was a director the Cape of Good Hope Bank and of the Cape of Good Hope Mining Company, which held leases in the copper fields of Namaqualand. 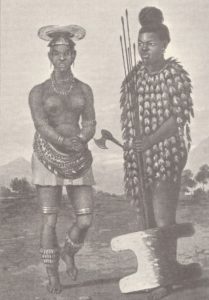 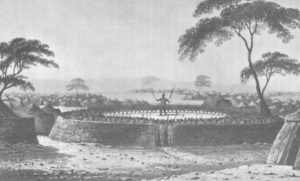 Travels and Adventures in Southern Africa, covering the period January 1821 to August 1824, was originally published in 1827 and was reprinted by the Van Riebeeck Society in two volumes.

In this volume, (VRS I-48), commencing in January 1821, Thompson set out on a six week journey to the eastern Cape to investigate the possibilities of expanding trade with the British settlers of 1820. He travelled by sea to Port Elizabeth, visited Uitenhage, Grahamstown, Bathurst, and other settlements and returned to Cape Town overland. This is followed by a trip to Swellendam, George and a visit to the Cango Caves. 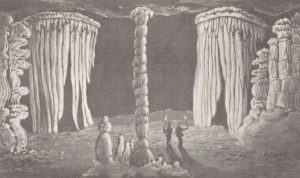 View in the Cango Cavern, by Torchlight

The second volume (VRS I-49) covers the period July and August 1824 when Thompson set out on a northbound journey via the Roggeveld and the Hantam to the Orange River. He interviewed many San and Khoi tribes, as well as the mixed race Griquas and Korannas, and describes their customs and ways of life. He concludes the volume with observations on the conditions of the Dutch and English inhabitants, on future colonisation and on agricultural and commercial potential of the country. 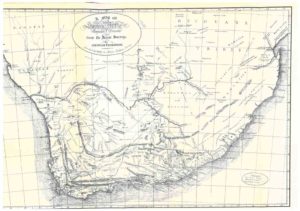 … what resembling those of a violin. With this instrument she produced a dull monotonous thrumming, in which my ear was unable to trace any thing like regular melody. The commandant informed me, that this woman had lived in his household from her infancy, and that a better or more trustworthy creature he had never had in his service. He remarked, that Bushmen in general, when taken young, make good and active servants; but that those who have grown up in the wilds to adult age, can seldom or never be induced to remain in the service of the farmers,— having a great aversion to manual labour, and preferring sloth, liberty, and hunger, to labour, servitude, and plenty.

The Bushmen on this frontier, whatever may have been the original condition of their progenitors, are now entirely destitute of cattle or property of any description; and now that the larger game have been generally destroyed, or driven out of the country by the guns of the Boors and Griquas, they are reduced to the most wretched shifts to obtain a precarious subsistence, living chiefly on wild roots, locusts, and the larvae of insects. The wandering hordes of this people are scattered over a territory of very wide extent, but of so barren and arid a character, that by far the greater portion of it is not permanently habitable by any class of human beings. Even as it is, the colonists are perpetually pressing in upon their limits, wherever a fountain, or even a temporary vley or pool of water is to be found: but had this territory been of a character less desolate and inhospitable, there can be little question that it would have been long ago entirely occupied by the Christians. They are continually soliciting from the Government fresh grants beyond the nominal boundary; and at present are very urgent to obtain possession of a tract lying between the Zak and Hartebeest Rivers. In defence of these aggressions they maintained to me that the Bushmen are a nation of robbers,—who, as they neither cultivate the soil, nor pasture cattle, are incapable of occupying their country advantageously; that they would live much more comfortably by becoming the herdsmen and household servants of the Christians, than they do at present on their own precarious resources; and finally, that they are incapable of being civilized by any other means, as the failure of the Missionary establishment among them at the Zak River had evinced. At this institution, I was told, the most strenuous exertions had been employed by the missionary Kicherer, for many years, to engraft upon them habits of industry and foresight, but totally without avail; for he had been ultimately forced to abandon the enterprise, and the station was now in ruins. Equally unsuccessful, Nel and Vlok informed me, had been all their own efforts to improve the wild Bushmen. On one occasion, they said, they had given to the captain of a horde a number of sheep and goats, to be kept as a joint-stock between the donors and his people; but on visiting the kraal, a short time afterwards, they found there was not one of the flock remaining, and that the Bushmen were as destitute as before.

Whatever may have been the causes of the failure of Missionary attempts to civilize the Bushmen, I fear that the usual conduct of the farmers towards them has been rather of a description to render them more barbarous and desperate, than to conciliate or civilize them. Latterly, indeed, several of the more judicious farmers had tried milder measures with them, and Nel informed me that a sort of treaty at present subsists between him and the captain of the principal horde in his vicinity. This chief waits upon Nel at every third full moon, and reports the proceedings of his clan; and if their conduct has been praiseworthy,— if they have lived humbly upon ants and bulbous roots, and refrained from stealing cattle, they receive certain allowances of sheep, tobacco, and trinkets, from the Veld-Commandant and the burghers under his control.

According to his own statements, however, a very different system had been long pursued towards this unhappy race. Nel informed me …