A Source Book on the Wreck of the Grosvenor East Indiaman

A Source Book on the Wreck of the Grosvenor East Indiaman 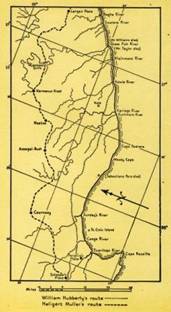 This volume contains the principal sources from which the history of the Grosvenor wreck has been reconstructed. These consist largely of the earliest official documents and reports, as well as some press notices. The contents include the journal and evidence of William Hubberly, the report of Abraham Chiron and a list of the ship’s company and passengers. 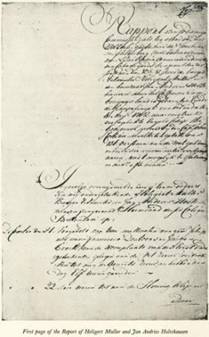 As soon as they marched the natives threw stones and hove their lances at them. ‘They could not go along the seaside on account of the steep cliffs to the southward of them, but they travelled along the top of these cliffs, never far from the coast, and always in sight of the sea, except in passing the hollows. They sometimes found paths of the Coffrees which they travelled along, and in some places was grass; and along the shore some parts were sandy, some parts rocky.’

‘The day after leaving the wreck, from whence the natives followed them, they fell in with a man lighter-coloured than the natives, with straight hair. They supposed him a Malayman, but the Dutch suppose it was a Dutchman named Trout. He came up to them, clapping his hands and calling “Engles, Engles!” He talked Dutch with John Sussman, Mr. Williams’s servant, and told them the Cape was a great way off; and, being desired to guide them, said he could not, as he was afraid of being killed if he went into the Christian country. They offered him any money if he would conduct them. He said he did not want money but copper. They said they would load him with copper, but he would not go. He advised them to go along the coast, for that inland they would meet the Boschemen Hottentots who would kill them all. This man was with the natives, but he thinks they were not the same kind of people as those where the ship was lost, because they were taller and not so black, and had their cheeks painted red, with feathers in their heads, he thinks ostrich feathers.’

‘He believes the Malay was a rogue as he shewed the natives where their pockets were.’

‘The captain had a stick with a bayonet on it, which the natives snatched away out of his hand, but the Malayman per­suaded them to give it back. The natives, with whom the Malay was, came and cut off their buttons.’

‘The natives always left them at night; they have but one shoe, made of buffalo hide, which they wear on the right foot. It has not top leather, except over the toe, and is tied round the ankle with two strings from the heel. The Dutchman, with whom he afterwards remained, told him they make great springs when they go a-hunting.’32 Lewis says they wear one shoe and are very nimble; that he could not run half so fast. They are sometimes out for three or four days from their huts; they feed their dogs with what they catch, not eating it themselves, and only bringing home a little on their knobsticks.

10th or 11 th August.33 About three or four days after leaving the wreck, the captain, going up a very high hill, took a lance from one of the natives, who endeavoured by signs and entreaty, as his words were supposed, to get it back but to no purpose. There was no village then in sight, but he went away to the village and called the rest who came out with their lances and targets.

‘The captain put the ladies, and those who were unable to do anything, upon a rising ground with the baggage, and then attacked the natives and drove them out of the village.’

‘The weapons used by the natives were targets made of hides to cover themselves, so that when our people threw stones at them they could never hit them. They had reddish sticks, seemingly dyed, with a wooden knob at the end, and lances; but not choosing to lose the iron of the lance, they drew out the lance-staffs and sharpened the end, and threw these staffs at our people. It was one of these they stuck into Mr. Newman’s ear; he was stunned and fell down, on which the natives made a noise.

One of the natives, ‘having fallen down in running away, he was overtook by the boatswain and others’ and bruised terribly, but the captain told them not to kill any.

‘Afterwards the natives brought sweet potatoes to exchange for the lance-staffs and sticks they had thrown at our people.’

They sat down peaceably round and the captain had some toys which he gave them, and they went away. After stopping about two hours our people proceeded; the natives did not molest them but let them go on.

After this scuffle they never opposed the natives, but let them   take what they pleased.

‘Having proceeded on, after beating the natives, about three or four miles farther, in the evening the Malay came up with them.